Havana says it will extend the rationing of food and other products in the face of hardened US sanctions. The political and economic crisis in Venezuela is also partially to blame. 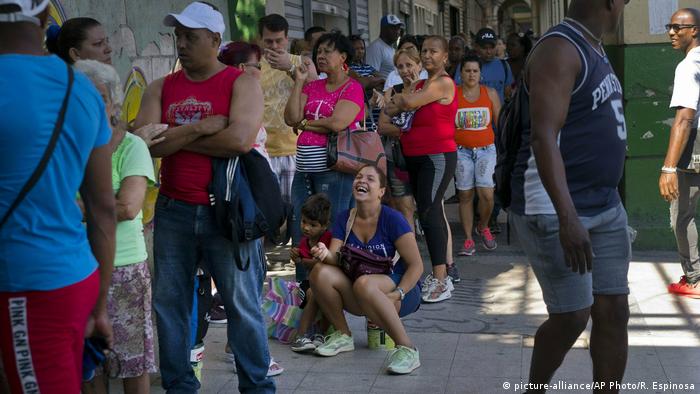 The Cuban government will widen the wholesale rationing of staple food items and other basic products in the face of a grave supply crisis, Commerce Minister Betsy Diaz Velazquez said Friday.

She said some items, such as chicken, would be limited to a fixed amount per purchase or per customer.

Other items, including eggs, rice, beans and sausages, would only be available to buy with a ration card, and would be limited to a maximum monthly amount.

Cuba, which imports 60% to 70% of its food, already has a system of rationing, but additional amounts are available at higher "liberated" prices. The new rules would ensure that all those foods would be rationed.

"Selling limited quantities will lead to equal distribution, so that the greatest number of people can buy the product, and we can avoid hoarding," Diaz said. Many of the products included have become increasingly scarce, with long queues forming when they become available.

Urging calm, Diaz said that importing food from the US had become more complicated under President Donald Trump because of tighter sanctions. That, she said, had forced Cuba to search for products that were more expensive and difficult to import.

However, Cuba has also suffered from a halving of oil deliveries from economically and politically stricken Venezuela. The island nation trades the work of Cuban doctors sent to Venezuela for oil that it then resells to other countries in return for foreign currency.

Friday's announcement is a setback for the Cuban government, which had aimed to end the rationing system established after the 1959 revolution.

The United States has accused Cuba of controlling Venezuela's political elite, its army and its intelligence services. Havana denies the claims and has called on Washington to provide evidence. (09.03.2019)

Voters in Cuba took to the polls to decide on a government-drafted constitution. It recognizes private property but keeps the Communist party in the saddle. The debate over the draft sparked anger from religious groups. (24.02.2019)

EU says will respond to controversial US move on Cuba

The EU says a move by the US to fully implement the Helms-Burton Act on Cuba violates international law. European companies could be affected by lawsuits resulting from Washington's decision. (02.05.2019)