Cuba and the US: A love-hate relationship

After resuming diplomatic relations five years ago, Cuba and the US find themselves on poor terms. The US embargo is tighter than ever, as Donald Trump turns back the clock. 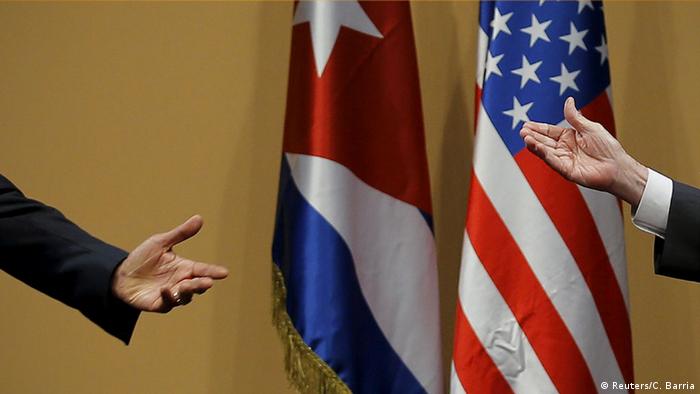 It was President Barack Obama who initiated the political thaw between the US and Cuba. The US president spoke of a "new beginning after decades of mistrust," before loosening travel restrictions and money transfer provisions.

The first direct talks between the heads of both countries came at the 2015 Summit of the Americas. Obama had Cuba taken off the US list of state sponsors of terrorism, restored diplomatic relations and even sent Secretary of State John Kerry to Havana to re-open the US Embassy there.

In March 2016, Obama himself arrived in Havana for a three-day visit, where Raul Castro called for the complete removal of US sanctions. That did not happen.

Indeed, developments went in quite the opposite direction: On November 8, 2016, two weeks before Fidel Castro died at age 90, Donald Trump won the presidency and immediately began to turn the clock back on Cuban relations. Cuba is now once again considered a terrorist state;the US makes it difficultfor Cubans living abroad to send remittance payments, or "Remesas," back home; and it is blocking the delivery of critical medicine despite the coronavirus pandemic. 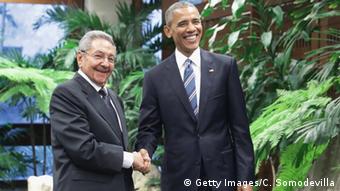 Sixty years ago, the embargo was "only" on sugar — Cuba's biggest export. US President Dwight D. Eisenhower blocked imports of Cuban sugar and advised US citizens against traveling to the island. The US officially broke off diplomatic relations with Cuba on January 3, 1961.

The Bay of Pigs fiasco

Washington thought the embargo would break Fidel Castro and his revolutionaries in short order. But those predictions turned out to be very wrong. Then, shortly after entering the Oval Office, President John F. Kennedy bumbled into the Bay of Pigs disaster. In the plan, inherited from his successor, a group of exiled Cuban mercenaries, with the help of the CIA, would attempt to overthrow Castro. When the amateurish invasion plan was put into action on April 17, 1961, it was quickly ended by Cuba's Revolutionary Armed Forces.

A year later, on March 24, 1962, Kennedy put Cuba under complete economic embargo. Conflict between the US and the Soviet Union soon escalated and the world found itself at the brink of all-out nuclear war during the Cuban Missile Crisis in October of that year.

Moscow had agreed to Castro's request that Soviet nuclear missiles be stationed in Cuba. Kennedy ordered a naval blockade to prevent Soviet ships from delivering further missiles and demanded those already on the island be dismantled. A 13-day standoff ended with Soviet leader Nikita Khrushchev agreeing to the terms in exchange for America's promise not to invade Cuba.

For 15 years, not much happened. Not until 1977, when a peanut farmer from Georgia tried a new approach. President Jimmy Carter loosened travel restrictions and even opened a US Interests Section in Havana. Cuba chose to use the name, too, when it opened its own offices in Washington.

Carter was still in office when thousands of Cubans occupied the Peruvian Embassy in Havana. Castro allowed them to leave and between April and October 1980, some 125,000 Cubans legally fled to Florida in overcrowded boats. The largest exodus out of Cuba, it became known as the Mariel boatlift — Mariel being the port from which the boats departed. 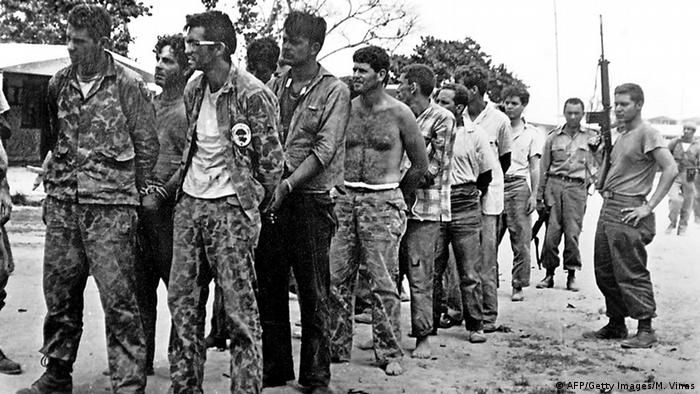 The struggles of the 'Special Period'

A decade later, the balance of the conflict had changed fundamentally. The Iron Curtain had fallen, the Cold War was over and Cuba's protector, the Soviet Union, had collapsed. Cuba struggled desperately during the so-called "Special Period in Time of Peace": Power outages were a regular occurrence, factories shut down and supply shortages became part of everyday life. The Cuban economy shrank by half between 1989 and 1992.

Ronald Reagan's successor, George H. W. Bush, was in the White House by this time, and he immediately spied an opportunity to cut off Cuba's oxygen once and for all. In 1992, Congress passed the Cuban Democracy Act, which prohibited US companies abroad from doing business with Cuba. Most charter flights between Miami and Havana were stopped. The act also gave Bush the power to cut aid to countries that co-operated with Cuba. Postal services remained open, however, and people were still allowed to make phone calls.

A year later, the United Nations General Assembly called on the US to finally lift the embargo, with an 88-4 vote, plus 57 abstentions — the US was of course one of the four voting against.

When thousands of Cubans took to the streets in 1994, to protest difficult living circumstances, Castro once again opened the mass-exodus valve to relieve pressure: Some 33,000 Cubans immediately fled for Florida in homemade rafts called Balsas, which gave the event its name: the Balseros Crisis. 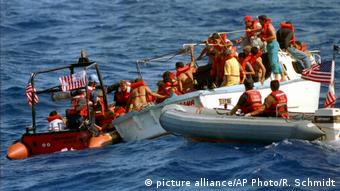 In the wake of that crisis, Washington agreed to issue 20,000 visas to Cubans annually. In May 1995, this new policy was given the name "wet foot, dry foot." If a Cuban refugee actually reached the US — with a dry foot so to speak — they were allowed to stay. On the other hand, if they were picked up at sea — wet footed — they were returned to Cuba.

President Bill Clinton was ready to ease the embargo, announcing he would veto the Helms-Burton Act passed by Congress. But then Cuba shot down two passenger planes with four exiled Cubans onboard and Clinton signed the bill into law in 1996.

Clinton's successor George W. Bush tightened travel restrictions once again in 2004, meaning Cubans or US citizens of Cuban descent were only allowed to visit their families once every three years rather than every year.

In 2008, a frail Fidel Castro handed over control of the country to his brother Raul. The United Nations yet again voted to end the embargo, with now only three against. Still, none of that mattered because the motion was non-binding.

When Raul Castro and Barack Obama restored diplomatic relations seven years later, on July 20, 2015, they raised a great deal of hope. The ensuing progress made toward rapprochement between Cuba and the US is seen as one of the Obama administration's biggest foreign policy achievements. That progress was quickly put to an end by President Donald Trump.

A German businessman wants to import the Cuban drug hydroxychloroquine — normally used to prevent and treat malaria — which may help treat coronavirus patients. But German bureaucracy is proving a formidable challenge. (04.04.2020)