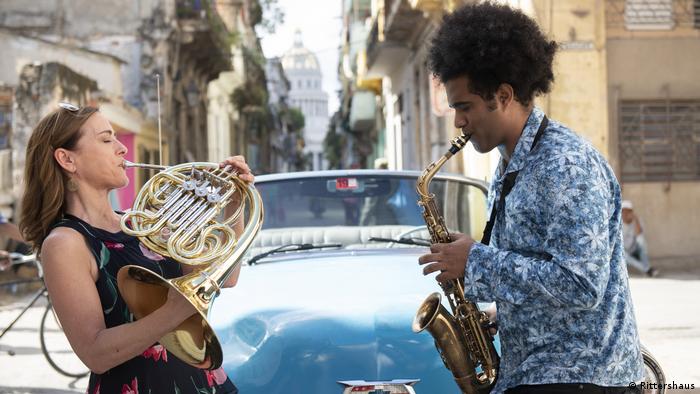 The Cuban capital of Havana has provided a charming backdrop to numerous films, including Wim Wenders' legendary 1999 music documentary, Buena Vista Social Club. Twenty years later, Havana is again the setting for a unique kind of music film, Mozart y Mambo, which was helmed by filmmaker Magdalena Zieba-Schwind and will screen exclusively on DW.

Mozart y Mambo traces a journey to fuse the music of Wolfgang Amadeus Mozart and the rich musical life of Havana.

"Mozart should have actually been born in Cuba," is the premise of the film that is narrated by Sarah Willis, a French horn player with the Berlin Philharmonic Orchestra. Combining Mozart and mambo, Viennese classicism with Cuban rhythms, the film is the realization of a vision Willis has had since first visiting the city in 2017.

Willis, who for a long time hosted the DW program Sarah's Music, came to Havana for the first time to teach. She encountered music everywhere: salsa, mambo, son cubano. Every house, street and city square was filled with infectious local sounds and rhythms.

In the middle of Havana's old town, she also noticed a slightly unexpected monument to Wolfgang Amadeus Mozart. But if you think of Mozart's music, its playfulness, joy and exuberance, the musical genius has much in common with Cuban musicians.

Read more: Salzburg Festival to be held despite COVID-19 restrictions

In Mozart y Mambo, this connection is revealed through the saxophonist Yuniet Lombida Prieto (top image), who plays chamber music, jazz and salsa on major international stages, and is part of the Orchquestra del Lyceum de la Habana, which is conducted by José Antonio Méndez Padrón.

"He has a musical soul," says Sarah Willis of the conductor who is in demand all over the world but who has stayed in Cuba and led the orchestra for ten years. He wants to inspire talented young musicians to retain a Cuban musical perspective.

But for those who stay in Cuba, it is difficult to survive as a musician as paying performances are rare and difficult to plan. Quality instruments are also hard to come by, and even harder to maintain due to the high humidity on the Caribbean island.

Despite or because of the musicians' adverse circumstances, Willis – who has been to Cuba four times –  has wanted to showcase their high level of musical skill, their joyful approach and special talent for improvising.

With Mozart y Mambo, which was recorded in January 2020, Willis wants to create greater awareness of the special talent possessed by her Cuban musical colleagues. Meanwhile, part of the CD revenues will go to the urgent acquisition of new instruments for the Orquestra del Lyceum de La Habana.

The orchestra had actually planned to travel to West Germany in summer 2020 to present the project live at major German music festivals. But due to the coronavirus pandemic, audiences will have to wait until 2021 to experience live why Mozart should have been a Cuban.

DW TV broadcasts the documentary Mozart y Mambo: A Cuban Journey with Sarah Willis as part of the programme Arts.21 on June 27, 28 and 29. On July 3, Sarah Willis' album Mozart y Mambo will be released on Alpha Records.

Beethoven was a godsend for the Schott music publishing company; Wagner was a challenge, but he still brought in money. The publisher continues to encourage and support contemporary and international composers. (18.06.2020)

The US sanctions spiral against the Caribbean island has become a major risk for EU firms. As Washington continues to tighten the screws, even traveling to the communist state could be dangerous for businesspeople. (19.02.2020)

At Home with Arturo Sandoval