A German businessman wants to import the Cuban drug hydroxychloroquine — normally used to prevent and treat malaria — which may help treat coronavirus patients. But German bureaucracy is proving a formidable challenge. 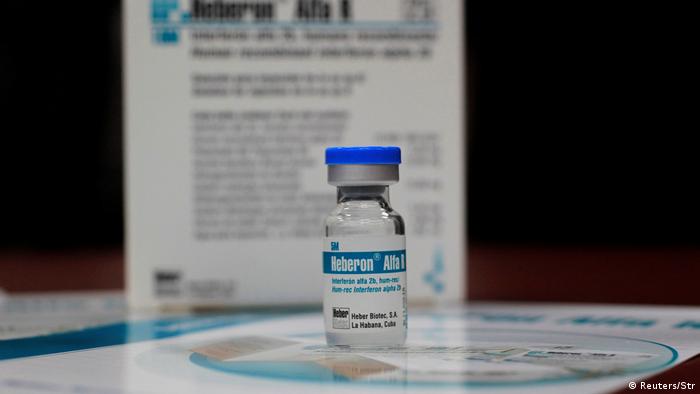 As Germany faces an increasingly serious public health crisis due to the coronavirus (SARS-CoV-2) pandemic, more and more locals are looking for ways to help. Georg Scheffer, who runs Profümed, a medium-sized company that makes cellulose-based medical products, is one of them.

"We followed the developments and the spread of the virus with great concern from the very beginning," said Scheffer. "It soon became clear to us that we had to do something to help save lives." Profümed employs about 150 people at production facilities in the German state of Saxony, as well as in Austria.

Read more: Where did coronavirus come from? Your questions answered

As no vaccine is yet available against SARS-CoV-2, Scheffer wants to import Interferon alfa-2b (IFNrec) from Cuba, noting that he has maintained close business ties with the island nation for years. INFNrec, a drug typically administered to strengthen a person's immune system, is usually given to patients with dengue fever, cancer or hepatitis B and C. In China, however, it has been used alongside other drugs to treat individuals who have contracted SARS-CoV-2. The results are said to have been promising.

"Every human life we can save though Interferon justifies us working to secure an import license for the drug," said Scheffer. He desperately wants to spare Germany the kind of public health catastrophe that has devastated Italy.

How to get it here?

Cuban pharmaceutical company BioCubaFarma has said it would need roughly 25 days to supply Profümed with enough of the drug to treat between 500 and 1,000 patients. Delivering it to Germany would take up to 25 days. But first, as stipulated in Germany's Medicinal Products Act, authorities must approve the drug in Germany and grant an import license.

Scheffer contacted various German ministries and state-level departments in mid-March to obtain both approval and an import license. The Economy Ministry informed him that his inquiry had been forwarded to the Health Ministry. Still, despite following up with the ministry in writing, Scheffer said he hasn't heard back from anyone.

He also got in touch with Saxony's Social Affairs Ministry, and yet once again received no answer. When DW asked for comment, the ministry sent the following statement: "To import drugs, you must meet detailed criteria specified in the Medicinal Products Act (approval, qualified person, storage, etc.)." Moreover, according to the statement, a sub-department of Saxony's Interior Ministry is responsible for issuing import licenses.

Drugmaker must prove effectiveness and safety

A spokesperson for Germany's Federal Institute for Drugs and Medical Devices (BfArM), meanwhile, told DW that, "bringing any drug to Germany requires official authorization." To obtain it, a "pharmaceutical company must submit documents proving the effectiveness, safety and quality of the drug."

The spokesperson said that currently no drug is known to be effective in treating COVID-19, and added that drugs containing Interferon alfa are already available in Germany.

Could the drugs be imported to Spain?

It's also true that while IFNrec may be a promising drug, it's certainly not the silver bullet some people on social media are making it out to be. Indeed, BioCubaFarma President Eduardo Martinez even publicly stated in Havana that "Interferon is a therapeutic product, not a vaccine."

Despite the setbacks, Scheffer said he wants to keep trying to import IFNrec. "If Germany doesn't want it, I will have it delivered to Spain," he said, noting that he is currently engaged in promising talks to that end.

Scheffer told DW he has been doing business with the Cubans for a while, and that they recently placed an order for dressing material worth hundreds of thousands of euros with his company. He thinks the Interferon shipment would serve as a kind of payment guarantee and believes "they would deduct that price from the cost of the drugs."

Germany, meanwhile, faces numerous coronavirus-related challenges. Protective face masks, for example, are hard to come by these days, posing a critical problem for medical staff. Scheffer wants to help out there, too. That is why his Saxony production facilities will begin making face masks, with the first prototypes expected in early April.

Coronavirus: Brazil is headed toward a 'perfect storm'

Brazil's overburdened public health system is not only gearing up to fight the new coronavirus, but also two other epidemics. Meanwhile the president preaches against isolation measures. (01.04.2020)