Crew trapped on German cruise ship vent anger at TUI | Germany | News and in-depth reporting from Berlin and beyond | DW | 08.05.2020

Travel giant TUI Cruises has kept nearly 3,000 crew members quarantined on a ship in Cuxhaven in northern Germany. DW spoke to several of them, who complained of payment issues, health risks and lack of communication. 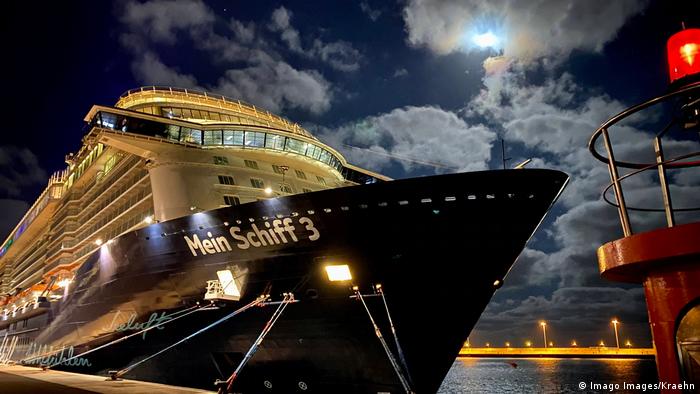 It has been several weeks since the 2,900 crew members on board the cruise ship Mein Schiff 3 have seen anybody from the outside world. "Life is really boring, the best I can compare it with is a prison," one male crew member summarizes for DW. "The crew is visibly unhappy."

That unhappiness is also visible on parts of the ship. Pictures show holes in the reception area's ceiling and front desk and a crack on the plastic screen placed in front of staff, where individuals lashed out in frustration. DW has seen a video of one frustrated member of staff kicking over objects in the reception area. According to the Cuxhaven police, officers attended the ship on May 2.

Multiple people on the ship say the atmosphere now is calmer, and the boat's operator, TUI Cruises, has been arranging for more workers to leave. But many of them are still left wondering why they were stuck on the ship with frustration building for so long. TUI told DW in a statement that shifting circumstances because of COVID-19 had changed their evacuation plans and sometimes slowed information channels. 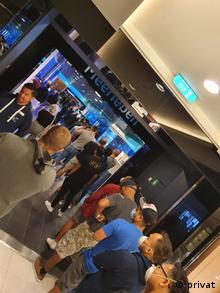 COVID-19 stopped German holiday giant TUI cruises in its tracks. After sending all passengers on its vessels home by March 23, the company brought the crew members from several ships together on Mein Schiff 3, with the idea of moving them all to Germany from where the company would repatriate them.

The ship docked in the northern German port of Cuxhaven on April 28. However, on April 30 one of the people on board tested positive for COVID-19 and the ship became a quarantine zone. TUI Cruises says it does not know how the virus got aboard. Travel restrictions put in place by many countries before the ship arrived in Cuxhaven made efforts to arrange flights for the crew more difficult.

In total nine crew members have tested positive for the virus. One was taken to the Helios Klinik in Cuxhaven, the rest self-isolated on the ship, and all are now symptom free. The other 2,900 people on board were left to mill about the 300-meter-long (984-foot) ship.

The overwhelming emotion from crew members is disappointment at TUI's handling of the case. "Honestly I always had a positive opinion of TUI but right now what is happening and how they have handled this situation is really bad," a member of the catering staff messaged DW. 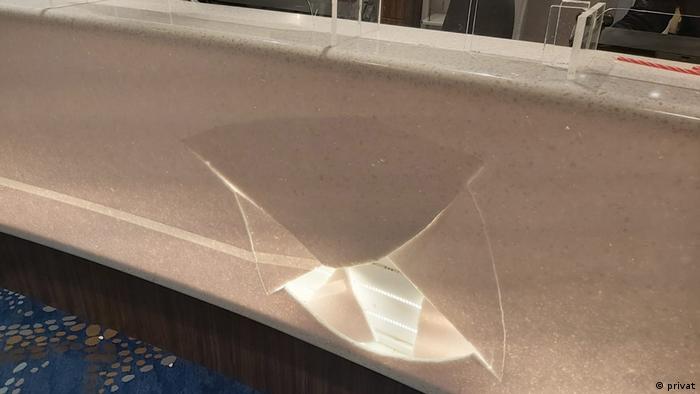 Another crew member, from housekeeping, wrote something similar. "They brought us to the ship as they said it would make repatriation easier," they said. "It was a mistake to put so many crew in one place, especially when they knew the risk."

The male crew member said lack of communication had not helped. "It is fair to say the company is normally very good at communicating, but it's broken down. Most information we find out between each other or online."

People have not found social distancing on the ship easy. Although they can sleep in guest cabins, not everyone has an individual room. Social distancing is non-existent for people waiting in line for food or to buy cigarettes, despite separate crews being given separate mealtimes.

Boredom is another issue. "If you don't have duty then there are no activities," writes one male crew member. "No more theater or DJ on the pool deck, no more alcohol, no cabin hangouts, no groups allowed, but not all are respecting this." Several people were also critical of slow internet speeds. 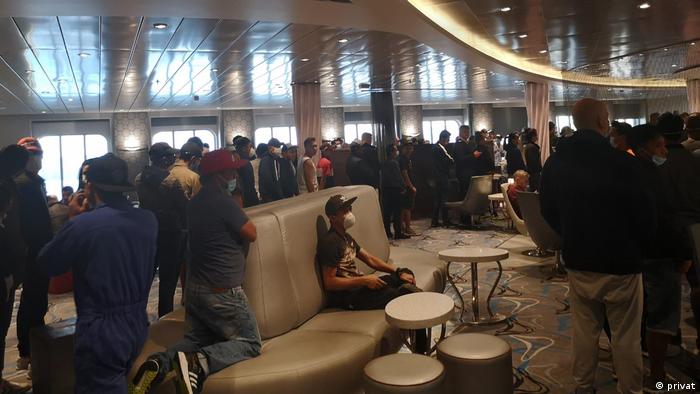 Some crew members were flown home on Friday

Several crew members are also concerned about their wages. As there are no customers, the crew was asked to switch to a basic wage while remaining on board the ship. "We are frustrated with many things, starting with the contracts that were changed to basic wage," says the member of the housekeeping team.

They and another crew member reported to DW that they received less than the basic wage amount. DW has seen one employee's bank transfer. The catering staff member said they were not told whether they would continue to be paid their full salary, a reduced amount, or nothing at all until the customers return. "Our normal contracts are 'frozen,'" they write, "so money that I earned, I might get it in September, or next year, or not at all.

When confronted with the crew's complaints, TUI Cruises emphasized staff had been moved to a union-agreed contract and that only 50 members of the crew were receiving room and board alone. The company also said global travel restrictions were behind the decision to try and send the entire crew home from Cuxhaven, and that those restrictions had complicated matters further.

It added the changing circumstances made it more difficult to get concrete information to pass to staff. "We know how unsatisfactory that is at times for crew members. We're sorry about that. We really are trying to inform the crew comprehensively and immediately when there are new developments."

Both loyalty and questions remain

TUI Cruises is beginning to send more significant numbers of the stranded crew home. On May 8 chartered flights took off to Ukraine, with other flights planned for 1,200 of them. But staff members' experiences have left them with concerns.

"I really don't have anything against the company, I love working here," says the catering staff member. "I'm just worried like rest of us what will happen with money and in the future."

The crew still has many questions. They're hoping TUI Cruises will be better at giving them answers.

Michael Altenhenne contributed to this report.