Heavily reliant on tourism, Southeast Asian nations are looking into ways to kick-start the vital economic sector, which has been battered by the pandemic. 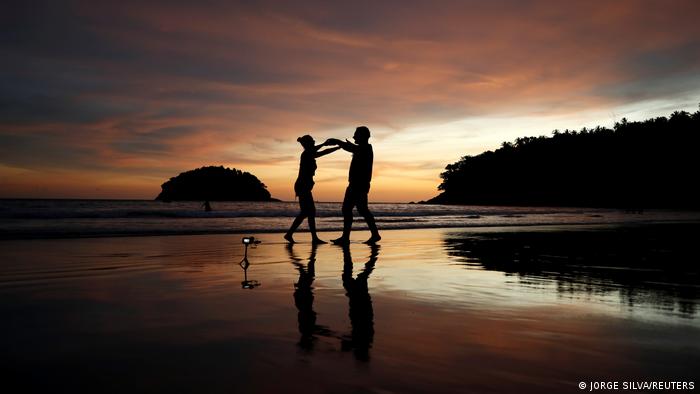 Thailand in July launched a so-called sandbox scheme in Phuket, its most popular beach island

It's little wonder Southeast Asia is now in a rush to welcome back tourists: In 2019, the tourism sector was worth $393 billion (€340 billion) for the regional economy.  Tourism accounted for about a third of Cambodia's GDP and one-fifth of Thailand's.

But the coronavirus pandemic has hit hard. The region welcomed 143 million tourists in 2019, but this collapsed by 81% last year, bringing down visitors to just 26.1 million, mostly from neighboring states, according to data from the Association of Southeast Asian Nations (ASEAN) bloc.

In 2019, the UK accounted for the 13th-largest share of tourists in the region, with 3.1 million British travelers visiting Southeast Asia. Some 2.1 million Germans and 2 million French also visited the region, according to ASEAN data.

Frederick Kliem, a research fellow and lecturer at the S. Rajaratnam School of International Studies in Singapore, said he didn't think that European tourists would be key in the considerations of Southeast Asian tourism industries.

"Europeans will always travel and will always be welcome — they just don't bring much money to the overall tourism income," he said.

Thailand in July launched a so-called sandbox scheme on Phuket, its most popular beach island. Since early October, Thailand has halved the quarantine period for fully jabbed visitors, to seven days. Bangkok, the Thai capital, including five other tourism destinations, will reopen to sandbox schemes from November. Most other areas will open in December.

Vietnam wants to open Phu Quoc island as a sandbox scheme from next month. Cambodia, which has the region's second-highest vaccination rates, expects to welcome back tourists by the end of the year.

Malaysia and the Philippines are also looking into ways of kick-starting the vital part of their economies, although Kuala Lumpur's newly passed Tourism Recovery Plan focused first on domestic tourism.

"Before the pandemic hit, Southeast Asia inbound arrivals were predominantly from Asian countries," said a spokesperson for the World Travel and Tourism Council (WTTC), an industry body. Chinese people accounted for 21% of all inbound tourists to the region, Singaporeans were 10%, and South Koreans made up 7%. In 2010, just 5.4 million Chinese visited the region. By 2019, it was up to around 32 million, according to official data.

The difficult question for Southeast Asian officials and businesses is whether what was true in 2019 will be true in the coming years.

In May, the Economist Intelligence Unit forecast that China would have vaccinated 60% of its population by the second quarter of 2022, but quarantine requirements for returning tourists won't be eased until late 2022, first for travelers from Hong Kong and Macau, and then in 2023 for people traveling from other countries. It expected China's outbound tourism to return to pre-pandemic levels in early 2024.

This is a big problem for Southeast Asia economies. Thailand, for instance, saw the number of Chinese tourists fall by 88.6% in 2020, compared with the previous year. According to the UN's World Tourism Organization, Chinese tourists spent $254.6 billion overseas in 2019, accounting for around one-fifth of global tourism spending.

Last month, new Malaysian Prime Minister Ismail Sabri Yaakob received mixed reviews after he argued that ASEAN should create a "travel bubble" with China for fully vaccinated tourists. "By doing this, we will be in a much better position to revive not only the tourism industry, but also our people-to-people connectivity," he said.

Some analysts, however, say it's premature to talk about Southeast Asian tourism sectors ever returning to pre-pandemic norms.

"Tourism as we knew it will not return," Kliem said. "What will henceforth always be required is full vaccination, including boosters, and tracking apps. Neither Singapore nor Malaysia will ever drop these requirements again," he added.

"The easy, virtually unrestricted travel we are accustomed to will never return to the same degree. New and permanent regulations will make it much more burdensome, and pricier," he said.

This will be a concern for Chinese tourists. The Economist Intelligence Unit report noted that they "will be drawn to countries that they see as safe and which offer an easy visa application process."

Opening quarantine-free travel could be key

"Southeast Asian countries will redouble their efforts to attract visitors from diverse source markets, including those in Europe," he said.

"The region is an incredibly popular long-haul destination for European travelers, so opening borders to Europeans is critical," the WTTC spokesperson said, adding that Europe is recovering faster than many other regions because of high vaccination rates and recently relaxed travel restrictions.

Are some countries opening too early?

The measures have sparked concerns that Southeast Asian countries are reopening to tourists too early. One big problem is vaccine inequality, said Abhishek Rimal, the Asia-Pacific emergency health coordinator at the International Federation of Red Cross and Red Crescent Societies.

Though Singapore and Cambodia have fully vaccinated about 80% and 66% of their populations, respectively, less than a quarter of people in Indonesia and the Philippines have been vaccinated. Meanwhile, Thailand, the country most reliant on tourism, has fully vaccinated just a third of its population.

"There is a critical balancing act taking place in Asia every day between the devastating infection rates and death toll, and the huge impact this pandemic is having on the casual labor force and daily wage earners, including many who rely on income or the flow on from the tourism industry," Rimal said.