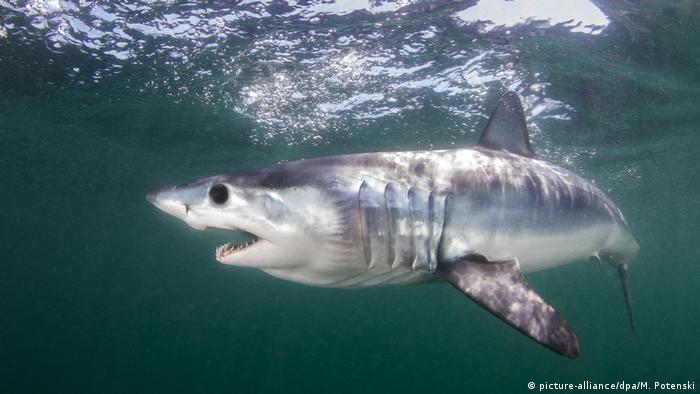 Delegates from 120 countries on Sunday adopted a proposal to protect 18 threatened species of sharks and rays, including makos, at the CITES global wildlife trade summit in Geneva, Switzerland.

The species will be listed on the Convention on International Trade in Endangered Species (CITES) Appendix II if the preliminary decision is endorsed.

Makos, the fastest shark species, are rapidly disappearing from the Mediterranean Sea, and their population is dropping in the Atlantic, Northern Pacific and Indian Oceans, too. They are often targeted for their meat and fins, which are used notably in shark fin soup — a popular dish in Asian countries, particularly China.

"These two species, the 'cheetahs of the ocean', play key roles as top predators in the world's high seas, and are highly valued for their meat, along with their fins, and are caught in huge numbers globally in commercial and recreational fisheries," Luke Warwick of the Wildlife Conservation Society said in a statement.

Mexico presented a proposal to list makos under CITES Appendix II, which means they cannot be traded unless it can be shown that fishing them won't threaten their survival.

"Fishing is the main threat being faced by sharks," said a delegate from the European Union, which backed the proposal. "We need much stronger measures" than national initiatives to prevent overfishing, he said during a heated debate in Geneva.

Japan and China opposed the proposal, arguing there was insufficient scientific data to prove that mako populations are declining as a result of trade in them.

The International Union for Conservation of Nature (IUCN) said in March that 17 species of rays and sharks faced extinction.

The other threatened species include the wedgefish — a shark relative — and the giant guitarfish, the most threatened marine fish in the world.

"(Their) fins are the most expensive in international markets, where they are prized for use in shark fin soup," said Warwick.

Where have the sharks in the Adriatic gone?

Megan O'Toole of the International Fund for the Protection of Animals (IFAW) said, "There is a real global momentum to save these species."

CITES can impose sanctions on countries that violate its rules.

For the first time, three species of sea cucumber — also hunted in Asia — were also listed in Appendix II, with a 12-month deadline for implementation.

WWF's Colman O'Criodain hailed the decision, saying the sea cucumbers, which are threatened by overfishing, play a crucial role in the health of ecosystems.

Over 100 countries also voted to ban trade in the smooth-coated otter, placing it on the CITES list.

The CITES wildlife summit voted down proposals for one-off ivory sales. But with loopholes continuing to drive elephant poaching, the exctinct woolly mammoth could help protect the endangered animals. (23.08.2019)

India's prime minister has hailed progress in revitalizing the country's native tiger population after decades of decline. But the endangered species faces an uphill battle to survive amid growing demand for tiger parts. (29.07.2019)