Japanese whalers have restarted commercial whaling after a 31-year break. The decision prompted outrage among activists, but experts say it might actually seal the fate of Japan's whaling industry. 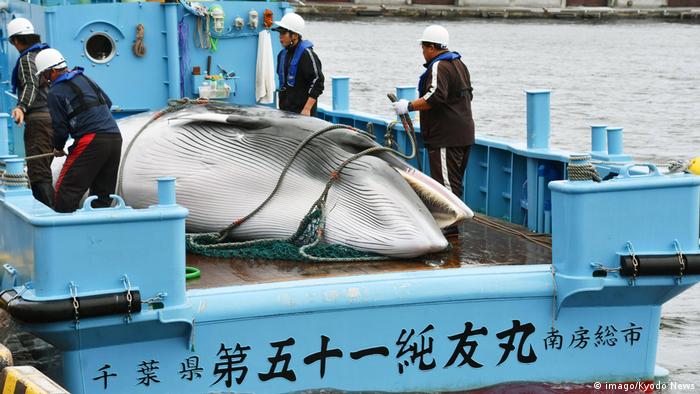 Japanese whaling ships left port on Monday at the start of the country's first commercial whaling season in more than three decades.

Crews of several Japanese whaling ships had been preparing their vessels in the northern port city of Kushiro in anticipation of the event, decorating their vessels with good luck flags. Five ships left port with horns sounding and grey tarps thrown over their harpoons.

"We are very excited at the resumption of commercial whaling," Yoshifumi Kai, head of the Japan Small-Type Whaling Association, told the Agence France-Presse news agency.

"My heart is full of hope," Kai added.

Tokyo pledged to obey the global whaling moratorium imposed by the International Whaling Commission (IWC) in 1986. However, it also argued that whaling and consuming whale meat is part of Japanese tradition.

After the global ban, Japan continued to hunt for whales in the North Pacific and Antarctic, but claimed the large animals were killed for scientific research. The nation's whalers have killed hundreds of aquatic mammals every year since then, and sold their meat. In the 2017-2018 whaling season, Japanese sailors killed 333 minke whales in Antarctic waters. Over 120 were pregnant females.

In December, Tokyo announced it would withdraw from the IWC and resume commercial whaling in its own waters. Its research fleet is now expected to take part in the commercial hunt.

Beginning of the end

Environmental activists around the world slammed Tokyo's withdrawal. During this week's G20 summit in Osaka, celebrities like Stephen Fry, Ricky Gervais and primatologist Jane Goodall all joined the appeal directed at G20 leaders to stop Japan from returning to commercial whaling.

However, some experts say the move could be a blessing in disguise for the hunted animals. Namely, Japan will only hunt for profit in its own waters, which means it would end its controversial scientific whaling in sensitive locations such as the Antarctic.

Demand for whale meat has dropped significantly in recent years and the government has also been slashing subsidies for the industry.

"What we are seeing is the beginning of the end of Japanese whaling," said Patrick Ramage, director of marine conservation at the International Fund for Animal Welfare.

"Japan is quitting high-seas whaling ... not yet a full stop, but that is a huge step towards the end of killing whales for their meat and other products," he told AFP.

Norway and Iceland also maintain commercial whaling fleets. This week, however, Iceland said they would skip the summer whaling season due to financial concerns, including the difficulties of selling the meat on the Japanese market.