Japan's ongoing "research whaling" program has incited fresh outrage after a recent report on the summer hunt in the Southern Ocean detailed the killing of over 120 pregnant whales. Julian Ryall reports. 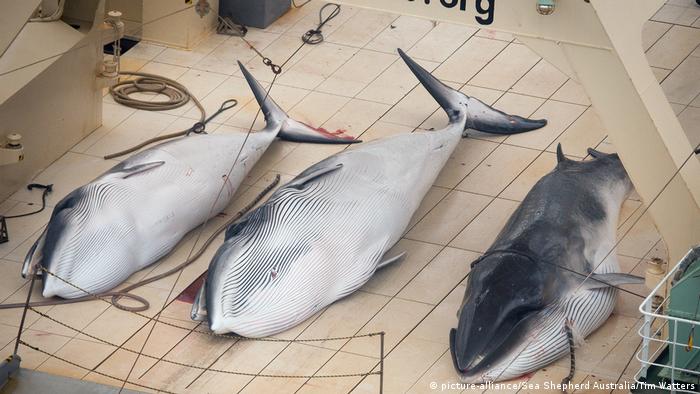 Environmental groups and animal rights activists condemned a new Japanese report to the Scientific Committee of the International Whaling Commission (IWC) confirming that 122 pregnant whales were among the 333 harpooned during the whaling fleet's most recent hunt in the Southern Ocean.

The report was submitted to the committee ahead of the IWC meeting in Slovenia on May 25 as part of Japan's efforts to demonstrate that its scientists are gathering valuable data on whale populations and that there are sufficient numbers in the world's oceans to resume commercial whaling.

That tactic has backfired, however, with the revelation that nearly two-thirds of the female whales that were harpooned were pregnant, while a further 53 of the 333 that were culled were immature specimens. 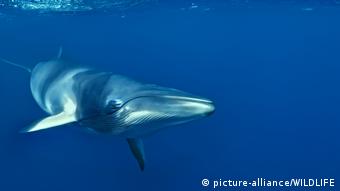 In defiance of court ruling

Environmentalists also pointed out that the whalers were operating in defiance of a ruling by the International Court of Justice in The Hague in 2014. It said that the hunt is thinly disguised commercial whaling rather than "scientific research" and that it had to stop immediately.

They also accuse the Japanese government of ignoring the declaration by the governments of Australia and New Zealand designating a vast tract of the Southern Ocean as a wildlife sanctuary where whaling is forbidden.

"It is outrageous that the killing of whales inside an established whale sanctuary continues, with the bloody and cruel murder of 333 protected minke whales, 122 of them being expecting mothers, Jeff Hansen, managing director of Sea Shepherd Australia, told DW.

"This is especially shocking when we consider that all scientific data on whales can be obtained through non-lethal means and there is absolutely no reason to kill these gentle creatures," he added.

"This is simply commercial whaling in everything but name," said Hansen. "But even then, nothing about it stacks up because the whalers do not make a profit, they are heavily subsidized by taxpayers' money and whale meat is hardly ever consumed in Japan now."

Japan's whalers use a loophole in the 1946 International Convention for the Regulation of whaling, which states that countries can "kill, take and treat whales for purposes of scientific research." Tokyo also insists that hunting whales is an important part of the nation's traditions and culture.

While Japanese coastal communities in the distant past may have carried out small-scale whaling of some individual specimens found in coastal waters, expeditions to the Southern Ocean only began after World War II, when the devastated nation relied on whales as a primary source of meat.

Today, whale meat can be found in supermarkets, but it is not popular with consumers, in part because it is known to be high in contaminants such as mercury. The whale meat that is brought back to Japan after each hunt is frozen and used in school meals. Much of the remainder is used in pet food.

After the 2014 ruling by the International Court of Justice, Japan increased the amount of research it carries out on the whale catch. But it also opted to protect itself from further legal challenges by withdrawing recognition of the court as an arbiter of disputes over whales.

"There is deep irony in the fact that Japan demands that other countries adhere to international laws and norms, but refuses to accept those that apply to whaling," said Hansen.

Officials from the Japanese government-affiliated Cetacean Research Institute and the National Research Institute for Far Seas Fisheries were unavailable for comment, but other animal rights organizations have echoed Sea Shepherd's anger.

"The killing of 122 pregnant whales is a shocking statistic and sad indictment on the cruelty of Japan's whale hunt," Alexia Wellbelove, of the Australia branch of Humane Society International, told DW.

"It is further demonstration, if needed, of the truly gruesome and unnecessary nature of whaling operations, especially when non-lethal surveys have been shown to be sufficient for scientific needs," she said.

"Whales are already facing substantial threats, including bycatch in fisheries and marine pollution,” she added. "Significant conservation efforts are underway worldwide to address these issues, so the least Japan could do is put away the harpoons."

"The continued killing of any whales is abhorrent to modern society, but these new figures make it even more shocking," said Wellbelove. "We look forward to Australia and other pro-conservation countries sending the strongest possible message to Japan that it should stop its lethal whaling programs."

A number of groups, including Sea Shepherd, are calling on the Australian government to send a vessel to oppose whaling by Japan. "This is the promise they made to the people of Australia and what the majority of Australians want to see done," said Hansen.

Hansen is not, however, convinced that sufficient international pressure will be brought to bear on the Japanese government over its whaling program.

"Japan is an important trading partner and, for that reason, no-one is challenging them on whaling," he said. "That needs to change."