Coronavirus: Will EU soon roll out Sputnik V vaccine? | Europe | News and current affairs from around the continent | DW | 29.03.2021 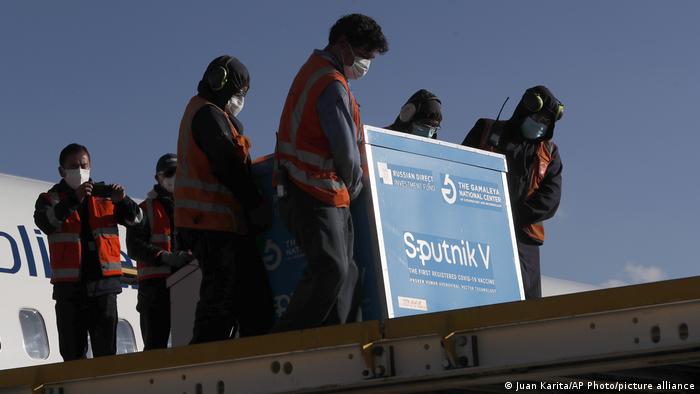 Vaccination campaigns in the European Union have been sluggish, mainly due to an insufficient supply of vaccines. That has prompted some politicians to float the possibility of giving the Russian-made Sputnik V vaccine the green light for use in the EU.

The European Medicines Agency (EMA) has been evaluating Sputnik V for several weeks now. In April, the agency will send experts to Russia to scrutinize the results of clinical trials and inspect the production process on the ground. So far, Russian manufacturers — much like their EU counterparts — haven't managed to scale up production to meet both domestic and international demand. But Moscow remains optimistic that this will change.

Tatiana Golikova, Russia's deputy prime minister and the head of the country's pandemic response, said recently that Russia was aiming to produce 178 million individual doses of Sputnik V and two additional vaccines, EpiVacCorona and CoviVak, by the end of June. As with most of the COVID-19 vaccines, two doses of each vaccine are necessary for a person to be fully protected. Russia, however, is planning to vaccinate some 30 million of its own people in the same time frame, according to report from news agency TASS citing Health Minister Mikhail Murashko. For that, the country would need around 60 million individual doses — leaving 118 million inoculations for export, enough vaccines for around 59 million people.

The Russian Direct Investment Fund (RDIF), which financed the distribution of Sputnik V and promotes it abroad, has said more than 50 countries worldwide are waiting for the vaccine. The fact that so many countries have already approved Sputnik V has been celebrated in Russia as an international success. According to RDIF, the populations in those interested nations amount to more than 1.5 billion people.

With all that interest, Russia simply doesn't have the production capacities to meet EU's needs of inoculating an additional 450 million people — and that is unlikely to change in the foreseeable future.

The only way out of this dilemma, according to the Kremlin, is to set up production sites outside Russia. "To meet the demand for our vaccine, we are working on a transfer of technology abroad," said Industry and Trade Minister Denis Manturov in a recent video conference with President Vladimir Putin. "Accordingly, we have deals with more than 10 countries to build production plants."

According to reports, Sputnik V is already being manufactured in Kazakhstan, Belarus, India, South Korea and Brazil. The RDIF has also signed an agreement with the Swiss-based pharmaceutical company, Adienne Pharma & Biotech, allowing a subsidiary to begin producing Sputnik V in Italy by July. The site is expected to manufacture 10 million doses by the end of the year.

On March 24, Russian drugmaker R-Pharm announced that it would start production of Sputnik V vaccines in its Bavarian plant in southern Germany. R-Pharm executive Alexander Bykov told German news agency dpa that millions of doses could be produced at the German plant starting in June — once the vaccine is approved by the EMA. France and Spain have also been named as possible sites for Sputnik V production in the EU.

That raises the question: Could Sputnik V provide the decisive push needed to speed up the EU's vaccination program? The answer is a clear no. The key breakthrough in Europe's vaccination drive is likely to come earlier — and for several different reasons.

By summer, the production of the BioNTech-Pfizer vaccine is expected to be significantly increased. The BioNTech factory in Marburg, north of Frankfurt, which began operations in February, has promised to churn out 250 million doses by the end of June. And French drugmaker Sanofi has said it would help bottle and package the BioNTech-Pfizer vaccine at a plant in Frankfurt, producing an additional 125 million doses for the EU.

American company Johnson & Johnson will being delivering its one-dose jabs, which have already been approved by the EMA, to the EU starting in April. The approval for the second German mRNA-based vaccine candidate by CureVac — which could provide the EU with a total of 405 million doses — is expected in May and June. And preparations are also underway for the approval of another American jab, Novavax.

At the same time, the EU will also raise pressure on pharma giant AstraZeneca to meet its contractual obligations with the EU. The company had promised 180 million doses for the second quarter of this year.

All this means that Sputnik V will only be deployed toward the end of Europe's mass vaccination campaigns, and in insufficient quantities, meaning it will likely not have any major impact. But production through European companies will allow Russia to raise its vaccine supply for countries around the world, likely making the EU an important production site for Russia's vaccines.

This article has been translated from Russian/German.