The US-produced, one-shot vaccine has become the fourth to be granted approval by the European Medicines Agency. The EU has already ordered 400 million doses. 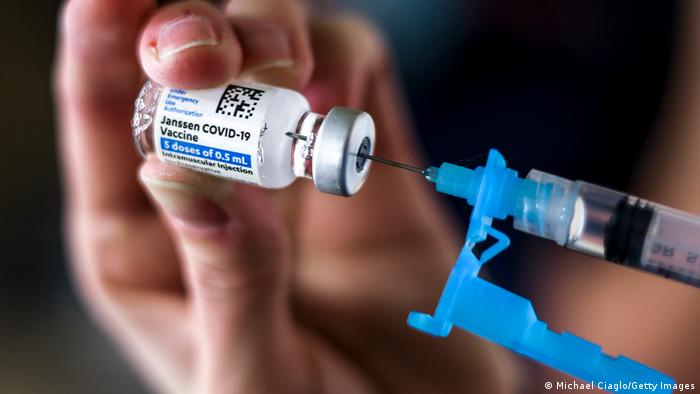 The European Union and the European Medicines Agency (EMA) on Thursday gave the green light to the Johnson & Johnson COVID-19 vaccine and it was later officially approved for use in the bloc by the European Commission.

The J&J vaccine is the fourth to be granted approval for use in the bloc. It joins the German-American BioNTech-Pfizer vaccine, the British-Swedish AstraZeneca vaccine and the US-made Moderna vaccine.

Ursula von der Leyen, the president of the European Commission, said that "more safe and effective" vaccines were coming to the market.

In a statement, the EMA said data for the J&J vaccine was "robust" and "met the criteria for efficacy, safety and quality."

"Authorities across the European Union will have another option to combat the pandemic and protect the lives and health of their citizens," said Emer Cooke, the EMA's Executive Director. "This is the first vaccine which can be used as a single dose," she added.

Polly Roy, a virologist at the London School of Hygiene and Tropical Medicine, told DW that the primary advantage of the J&J vaccine is that it can be administered in just a single dose. Additionally, it can be kept at warmer temperatures and therefore stored more easily than some of its competitors' products, she said.

Regarding several European countries' withdrawal of the AstraZeneca vaccine after some patients developed blood clots, Roy said the clots were "probably not due to the vaccine itself."

"Maybe they have some underlying problem," she said.

The J&J vaccine was developed by Janssen Pharmaceuticals, which is owned by J&J and based in Belgium. The EU has already secured 400 million doses of the vaccine, which had been under EMA review since December 2020.

The EU has been heavily criticized for its handling of the vaccine rollout and for lagging behind countries like Israel, the US and the UK with its coronavirus vaccine rollout.

Europe is also experiencing an uptick in new infections as new variants spread. There were 1 million new COVID-19 cases recorded last week, an increase of 9% from the previous week.

The EU has also been mired in disputes with AstraZeneca over delivery problems with vaccines. This has also led to the EU blocking some exports of the vaccine.

How does the J&J vaccine work?

Global clinical trials showed that it was 67% effective at preventing various COVID-19 variants and 85% effective at protecting people from developing severe infections.

The lower efficacy is partially explained by the fact that trials were conducted later than other vaccines after more aggressive variants had become more dominant.

The vaccine follows a traditional vaccination approach, using a common cold virus to introduce coronavirus proteins into the body and thus produce an immune response.

This also means that unlike the BioNTech-Pfizer vaccine, the J&J vaccine does not need to be stored at ultra-low temperatures and can be used in areas without access to special refrigerators.

Where has the J&J vaccine already been approved?

The jab has already been authorized for emergency use in the US. Bahrain was the first country to grant it approval.

The New Jersey-based company is also seeking approval from the World Health Organization. The requirement for just one dose makes it a suitable candidate for large-scale, global use.

The company has stated that it aims to produce around 1 billion shots of the vaccine by the end of the year.

Three other vaccines are under rolling review by the EMA are CureVac, Novovax and Sputnik V.

Rolling review allows the regulator to speed up its review process by looking at data as it's released by the companies, rather than in one go.