The makers of Russia's Sputnik V vaccine have called on a top EU regulator to apologize for comparing emergency vaccine rollouts to "Russian roulette." Meanwhile, Italy has signed a deal to produce Sputnik V jabs. 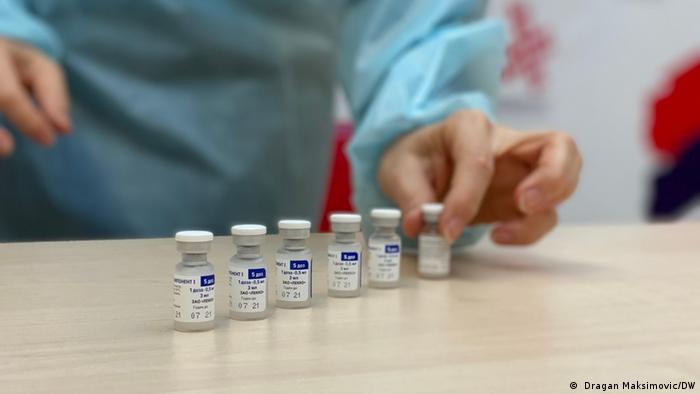 On Tuesday, the team behind Russia's coronavirus vaccinedemanded an apology from the European Union's medicines regulator after a senior official compared emergency rollouts of the jab to "Russian roulette."

Several EU countries have already started to distribute and use the Sputnik V vaccine despite the European Union's not yet giving its approval. These rollouts were criticized by the European Medicines Agency (EMA) board chair Christa Wirthumer-Hoche.

What did the EMA official say?

Last week, the Amsterdam-based EMA began a rolling review of the Sputnik V vaccine, a key step toward the shot's approval as the first non-EU or -US jab for the 27-nation bloc.

Hungary has already approved Sputnik V and is using the jabs as part of its inoculation drive. The Czech Republic and Slovakia have also ordered doses and have said they will not wait for EMA approval.

When asked whether Austria should unilaterally approve the vaccine, Wirthumer-Hoche told the country's ORF broadcaster: "It's somewhat comparable to Russian roulette."

"We demand a public apology from EMA's Christa Wirthumer-Hoche for her negative comments on EU states directly approving Sputnik V," the manufacturers wrote on Twitter.

"Her comments raise serious questions about possible political interference in the ongoing EMA review," they said, adding that their vaccine had already been approved by 46 nations.

"No one should doubt that this is one of the world's most popular and perhaps most trusted vaccines," Peskov said.

In another signal of the EU embracing the Russian-made jab, Russian authorities signed a deal with an Italian manufacturer to produce the Sputnik V vaccine within the EU for the first time.

The Italian-Russian Chamber of Commerce said the deal was signed between Adienne Srl, the Italian subsidiary of a Swiss-based pharmaceutical firm, and Kirill Dmitriev, chief of the Russian Direct Investment Fund.

Production is set to start in July, with an expected 10 million doses to be made this year. Russia is working on 20 similar collaborations in Europe.

"The innovative production process will help create new jobs and allow Italy to control the entire production of the compound,'' the chamber said. Financial terms were not released.

The Russian Direct Investment Fund, which has bankrolled the vaccine production, says manufacture of the jabs will eventually involve many countries from different parts of the world, including India, South Korea, Brazil, China, Turkey, Iran, Belarus and Kazakhstan.

Two more Russian vaccines: What we do and don't know

Russia has approved three coronavirus vaccines — first, Sputnik-V, then EpiVacCorona and CoviVac. But clinical trials for the last two are incomplete.

As Germany begins introducing new restrictions for unvaccinated people, some find themselves in a peculiar situation — being fully vaccinated but not counted as such. DW reporter Natalia Smolentceva is one of them.