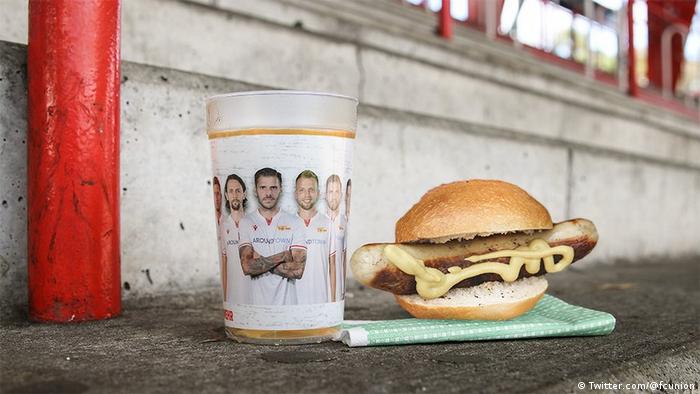 The gates of the Stadion An der Alten Försterei, like those of every football stadium in Europe at the moment except those in Belarus, are locked. No one can say when they'll reopen, and even the resumption of the Bundesliga season might not do it. So-called "ghost games" could see Union Berlin forced to complete their first ever top flight campaign behind closed doors. Fans are shut out for the foreseeable future. A beer and bratwurst, however, can still be had - after a fashion.

At the "virtual food truck," fans can make small donations to the club by "purchasing" a non-existent refreshment: €2.50 ($2.75) for a drink, €2.50 for a snack. The idea came from the fans, as Union's director of communications, Christian Arbeit, told DW. 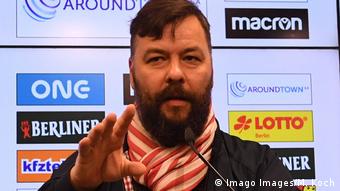 "As soon as the football stopped, we were contacted by a large number of fans who wanted to know if they could somehow help or support us. Among the many ideas that reached us was the suggestion that people donate the money that they'd otherwise have spent in the stadium on bratwurst and beer, so that the club could still benefit. So we said 'Great, let's open a virtual food truck, and offer everything that's usually available in the stadium.'"

Football clubs across the continent have watched their incomes evaporate as a result of the coronavirus pandemic. The sums donated at the virtual food truck might be modest in comparison with the missing millions from the television and sponsorship deals, but Arbeit is pleased to see the Union family standing together.

"Of course, we never expected to be in a situation like this in our first season in the Bundesliga. It's a difficult time for all football clubs. But that makes it all the better that we've upheld our feeling of togetherness."

That feeling is manifest not only among supporters, but also among the squad. Eleven days after the virtual food truck opened for business, Union's players followed the example set by several other sides in the Bundesliga, and agreed to take a pay cut. "It's a good sign of solidarity I think, that even the players and the coaches agreed to cut down the costs for the club," said Arbeit. "That's the spirit of Union, that we are in this boat together, and together we try to get through the storm."

All German clubs are currently being deprived of vital revenues by the indefinite suspension of the season, but clearly the shortfall will hit some harder than others; few can match the financial resilience of Bayern or Dortmund. Union, as a newcomer to the top flight, are less stable than many other sides. Fortunately, solidarity has been shown not only by fans and players, but even by competitors. On Thursday, the four Bundesliga teams to have taken part in this season's Champions League announced that they would provide €20 million of relief to other clubs in the top two divisions.

"What we see at the moment is that everyone who's taking part in the league is trying to put in their bit to help out. No one can survive on their own," reflected Arbeit, who sees the funds as a welcome gesture of solidarity. "It fills the pot a bit, and in the end there will hopefully be enough in the pot to let us all survive."

Ghost games may be necessary

The end, though, is not yet in sight. The DFL has recommended delaying the restart of the season until at least April 30, and when clubs meet next week to discuss a way forward, the issue of ghost games will be high on the agenda. 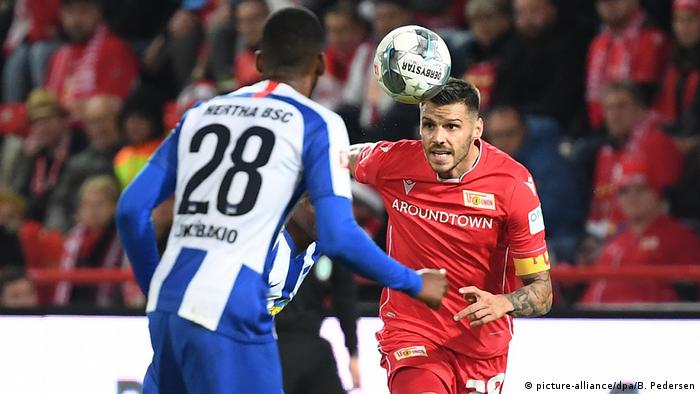 Union Berlin have enjoyed their debut Bundesliga season, which included a win over rivals Hertha

"Of course, we all know that football is better with fans, the fans are the reason we do it," Arbeit told DW. "[Ghost games] at least allow us to carry on with the competition, and they mean we've got something to offer, some games to show on television. That's important too."

Whichever form the restart takes, until it happens, clubs remain starved of funds, and fans remain starved of football. Like many other sides, Union is doing its best to bridge the gap by digging through the archives. Last weekend would've seen the second Berlin derby of the season, so in its place, the club streamed the 2011 fixture online, their first and to date only ever competitive win at Hertha Berlin's Olympiastadion. Arbeit recalled the joy that the match brought to fans, as seen on Twitter. "It was great how people celebrated first the equalizer and then the winner, as if it'd just gone in, even though the game was nine years ago."

And what better accompaniment to an online derby than an online refreshment? "Everyone who wants to help is invited to come and drink a virtual beer." Don't worry, said Arbeit, "it won't make you drunk."

As the world continues to grapple with the COVID-19 pandemic, football stars and clubs are doing their bit to help their clubs and homelands. Here are a few stories of how football is helping in the fight. (25.03.2020)