Coronavirus: How long can Thailand survive without foreign tourism? | Asia | An in-depth look at news from across the continent | DW | 03.09.2020 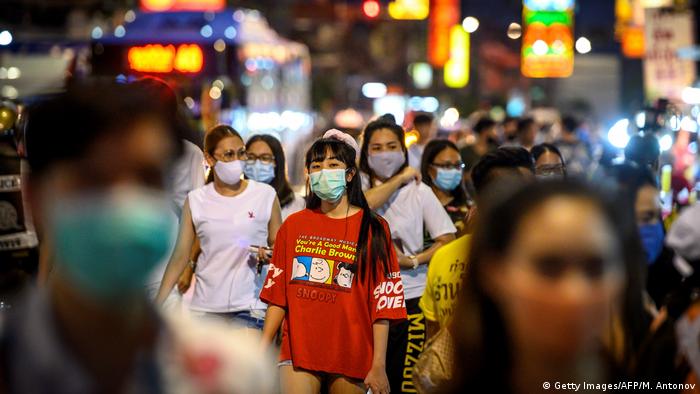 In Phuket, Thailand's largest island and a key tourist destination, many tour operators are struggling to stay in business without foreign travelers.

"COVID-19 has affected us. We haven't had any customers since the end of March," the caretaker of Phuketastic Travel told DW on condition of anonymity. Most of Phuketastic Travel's customers are Germans, who made the fourth-largest group of foreign travelers to visit Phuket in 2016, after the Chinese, the Russians and the Australians, according to the National Statistical Office of Thailand.

With the tour company's office temporarily closed during the pandemic, Phuketastic Travel's 40-year-old caretaker is facing financial hardship. There is little she can do apart from monitoring the ever-changing pandemic situation.

Thomas Moog, who runs a German restaurant and offers tour services in Phuket, is also uncertain about the future.

"The current crisis is worse than the tsunami [in 2004]. Back then, we cleaned up and reopened our business. Now we have no idea when things will go back to normal," Moog, who has been living in Thailand for nearly 20 years, told DW.

In 2019, over 14 million travelers, including 10 million foreign tourists, visited Phuket. The Thai government plans to lift the ban on international travel soon, and Moog hopes business in Phuket will eventually pick up.

Although domestic tourists have somewhat kept the industry alive, local spending hasn't compensated for the slump in foreign tourism revenue.

"In spite of domestic demand, the situation of tourism-related businesses in Phuket is still worrisome," Bhummikitti Ruktaengam, the president of the Phuket Tourist Association (PTA), told DW. According to PTA, tourism businesses in Phuket suffered a loss of 180 billion baht (€4.84 billion/$5.72 billion) in the first half of 2020.

Coronavirus and the collapse of tourism

The pandemic has exposed the dependence of Thailand's tourism industry on foreign tourists. PTA's Ruktaengam says the immediate challenge is to ensure that tourism-related entrepreneurs survive the crisis.

With just around 3,500 infections and 58 related deaths, Thailand has largely managed to control the COVID-19 spread.

While the shutdown has protected the country from a massive viral outbreak, it has devastated the tourism-dependent economy, which last year welcomed a record 39.8 million foreign tourists, generating 1.9 trillion baht, according to the Ministry of Tourism and Sports. But this year, the Bank of Thailand (BOT) expects only 8 million foreign visitors to enter the country. On Monday, Don Nakornthab, a senior official at BOT, said the projection might be downgraded further.

"The government must prepare a plan to attract foreign tourists, at least to some destinations that can effectively contain the pandemic. Without foreign visitors, tourism in many areas would not survive by the end of the year," Juthathip Jongwanich, an associate professor at Thammasat University's Faculty of Economics in Bangkok, told DW.

Thai authorities are planning to allow foreign tourists to visit the country with a pilot project called the "Phuket Model." The tourists will be required to stay in Phuket for at least 30 days, with the first 14 days in quarantine within the limited vicinity of their hotel, before they can visit other areas.

According to Ruktaengam, the authorities have devised a so-called "5T" Policy — target, testing, tracing, treatment and trust — to ensure tourists' safety and also to revive the economy.

Although local media reported that Phuket will reopen to international tourists on October 1, it is unclear when the "Phuket Model" will come into force.

"We will reopen when we are ready," Ruktaengam told DW. The PTA president has urged caution, saying that "Phuket is too bruised" and vulnerable for the reopening to go wrong.

Can tourism be revived?

Many people doubt that the reopening plan will pan out, given the compulsory 14-day quarantine period in the hotel and other safety procedures.

According to Moog, the "Phuket Model" could attract some retired people from Scandinavia and Germany who want to escape the winter months in Europe. But he doubts that they will bother to stay two weeks in quarantine.

Ruktaengam, however, is optimistic about the success of this pilot project. "Many tourists will be interested to visit despite conditions. They won't mind spending a month in Phuket, including two weeks in quarantine."