Thai protesters call for end of monarchy on king′s birthday | Asia | An in-depth look at news from across the continent | DW | 29.07.2020

Thai protesters call for end of monarchy on king's birthday

The king's passivity during the COVID-19 pandemic has made him the target of unprecedented criticism at home and abroad. As Thailand struggles to cope with the crisis, he is gallivanting miles away in Germany. 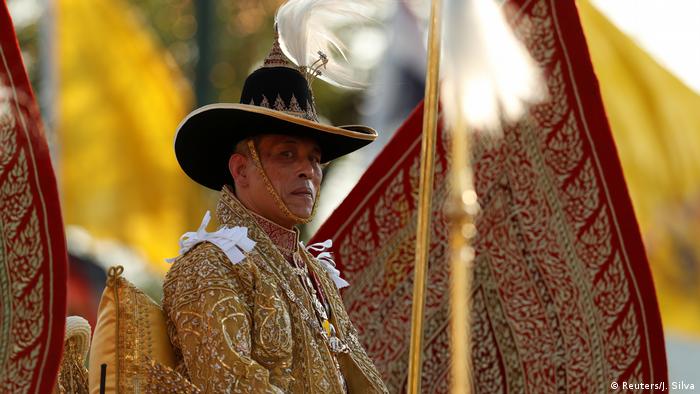 Thailand celebrated the 68th birthday of King Maha Vajiralongkorn on Tuesday with official religious ceremonies and public displays of loyalty throughout the country. The king himself, however, was absent from his own festivities.

As anti-government protests gain momentum and the impacts of the COVID-19 pandemic grip the country, the monarch and his entourage have sought refuge in a luxurious hotel in the Bavarian Alps. The Thai king is known to reside in Germany for long periods of time.

On the morning of the king's birthday, Prime Minister Prayuth Chan-ocha led an annual oath-swearing ceremony with his cabinet members and 69 Buddhist monks in Bangkok's Sanam Luang Square — vowing to be loyal civil servants to the king, also known as Rama X.

"We solemnly swear that we will do good work and be the strength of the country. We will follow in His Majesty's footsteps to solve the problems of the nation and the people," said Prayut and his cabinet.

For Thais who revere the monarchy, Vajiralongkorn's birthday is an important time of year. For others, it is a reminder of outdated traditions and the mass inequality that exists in the country.

Vajiralongkorn's passivity during the pandemic has also made him the target of unprecedented criticism in a country where the monarchy plays an important role for many.

Coverage of the king's lavish life abroad circulating in foreign media outlets cannot be reported in Thailand due to its strict lese majeste law, which prohibits any disparaging statements or opinions about the king and the royal family. Failing to adhere to Article 112 is a crime punishable by three to 15 years in prison.

In June, the prime minister said the king, in his "compassion," had instructed the government not to enforce Article 112 for persecutions but warned that anyone who criticizes the monarchy risks their livelihood.

Exiled activist Junya Yimprasert told DW: "Article 112 is still a threat as long as it exists because it's used periodically and systematically."

Despite draconian laws on speaking out against the monarchy, Thais have taken to the streets and social media platforms to vocalize their frustrations. Student-led anti-government protests have been spotted, with demonstrators brandishing placards and banners with messages critical of the king. The slogans, however, were disguised with slang and sarcasm.

The Free Youth movement staged a political rally in Bangkok on July 18 to demand the dissolution of parliament and an end to crackdowns on anyone opposing the government and constitutional reforms. They carried signs reading "Lost faith is definitely not a crime" and "We didn't lose faith because we never had faith," referring to political and human rights activist Tiwagorn Withiton.

'I lost faith in the monarchy'

Withiton was admitted to a psychiatric hospital in early July against his will after he spoke out against the forced disappearance of Thai dissident Wanchalearm Satsaksit in Cambodia. Satsaksit had been critical of Thailand's military and monarchy.

Withiton had posted a photo on Facebook in which he was wearing a T-shirt emblazoned with "I lost faith in the monarchy." Security officers paid him a visit and tried to convince him to stop wearing the T-shirt, citing that it could cause division in Thailand.

After continuing to wear the T-shirt in public, the activist was taken forcibly from his home in the northeastern province of Khon Kaen.

After two weeks in hospital, Withiton was unexpectedly freed on July 22. He said ongoing protests calling for his release were the catalyst for his freedom.

"Right now, I have to recover physically and emotionally after being admitted to the hospital," said Withiton.

Some 8,500 kilometers (5,300 miles) to the northwest, members of the German non-profit PixelHELPER Foundation and Thai nationals living abroad gathered to stage a protest on the king's birthday.

Led by exiled activist Junya Yimprasert, protesters gathered in front of Berlin's Brandenburg Gate and held signs which read: "Thai king to International Criminal Court (ICC)." They also erected a makeshift guillotine with a caricature of Rama X behind bars.

"Our goal is to abolish the monarchy," said Yimprasert. The 54-year-old has been using an unconventional approach to catch the king's attention. For weeks, she and fellow protesters have used a light projector to display anti-monarchy messages on the front walls of the Grand Hotel Sonnenbichl in Garmisch-Partenkirchen, where the king currently resides.

To garner more attention, the group has also projected comical illustrations featuring Rama X onto the walls of the German parliament and the home of Chancellor Angela Merkel.

The activists now intend to step up the protest. "We are searching for old fire brigade cars to drive alongside him [the king] when he goes biking. We want to end the fun of his private life and convey to him that it's not so nice that he stays in Germany," said PixelHELPER founder Oliver Bienkowski.

Speaking with DW, Bienkowski said the group is also planning to stage a 24/7 protest in front of the king's hotel and expand their efforts to other European countries, including Switzerland, where Queen Suthida is believed to be staying.

The Berlin-based organization also wants to target Thailand's tourism sector to make Germans "aware of the situation" in the Southeast Asian country.

Thailand's Royal Office did not respond to DW's requests for comments about the ongoing protests and the king's role in Thailand given his absence.