An anti-government rally in Thailand is one of the biggest seen in the country since a coup in 2014. Protesters accuse Prime Minister Prayuth's administration of rolling back democratic freedoms. 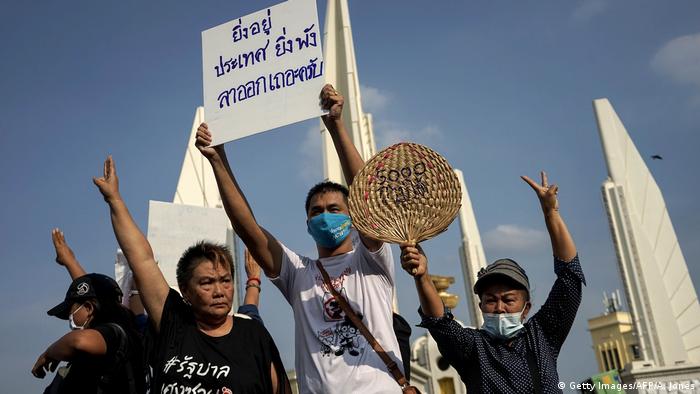 Protesters allege freedoms have been disappearing under former army chief turned prime minister, Prayuth Chan-ocha, who came to power in a coup in 2014. Opposition to his military-stacked administration has been growing in recent months, and the worsening state of the pandemic-hit economy has only added to public anger.

"How can we be OK with the lack of democracy like this?" student activist Tattep Ruangprapaikit asked the crowd. 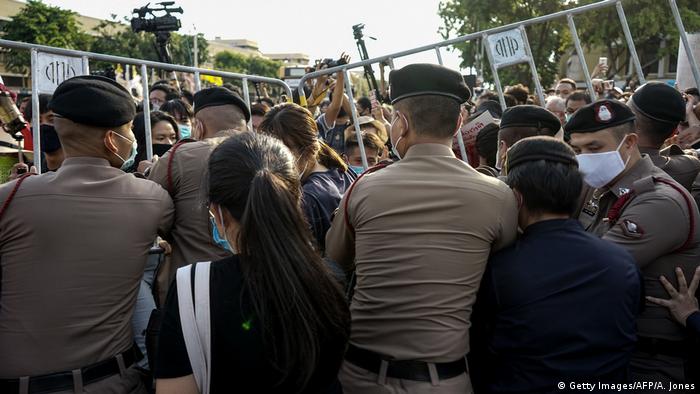 Police tried to hold protesters back from the Democracy Monument

Organizers of Saturday's rally — one of the largest street demonstrations since Thailand's coup six years ago — are demanding the dissolution of Parliament and an end to the harassment of government critics. They also want an overhaul of the military-drafted constitution, which they say cleared the way for Prayuth's Palang Pracharat party to claim victory in 2019 elections.

"The government doesn't care about us, so either we come out or we lose anyway," 18-year-old protester Sang told the AFP news agency. "The laws protect the rich and leave the people with nothing."

Some demonstrators held up signs calling for the scrapping of Thailand's royal defamation law, which punishes criticism of the monarchy with up to 15 years in prison.

Absolute royal rule ended in a 1932 revolution when Thailand became a constitutional monarchy, but analysts say the country risks sliding back in that direction under King Vajiralongkorn, who took over the throne from his father in 2016.