Protesters in Thailand have defied government warnings to mark the anniversary of the 1932 revolution that brought an end to absolute monarchy. They say authorities are removing symbols of the revolution. 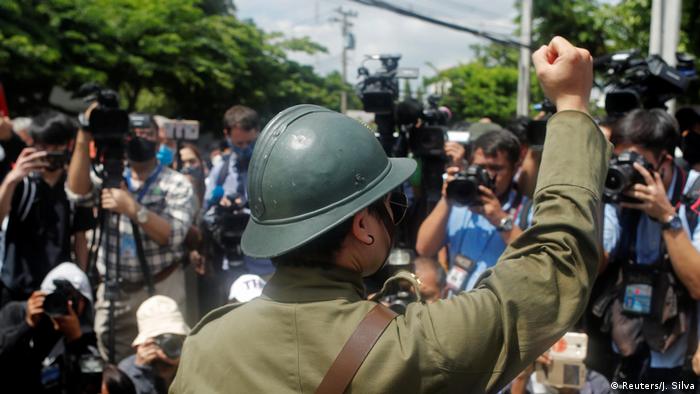 Thai political activists staged demonstrations Wednesday to mark the anniversary of the 1932 Siamese revolution which overthrew Thailand's absolute monarchy. The bloodless uprising saw the monarchy become a constitutional one and increased democracy.

Over 100 people gathered at Bangkok's Democracy Monument early in the morning. Footage projected onto a white sheet used as an impromptu screen showed the 1932 overthrow announcement. 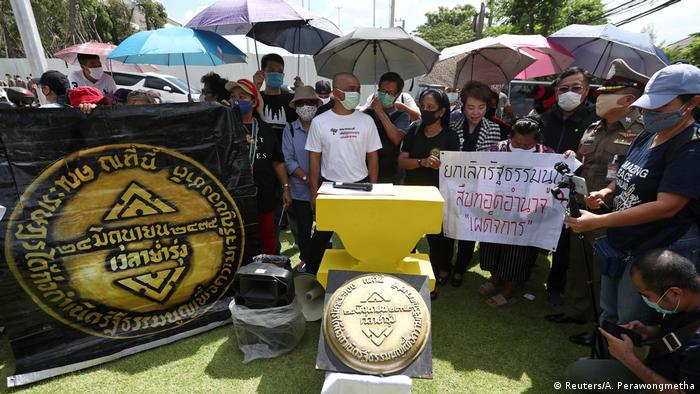 "Eighty-eight years ago today around dawn, the People's Party seized power and changed the system of governance to a democracy," said pro-democracy activist Anon Nampa at the rally.

Another prominent pro-democracy activist Chonthicha Jangrew told the Associated Press that authorities were trying to eradicate the revolution from history "and how important democracy is in Thailand."

Did authorities allow the rallies?

Police had placed "No entry" signs at the monument but in the end allowed the activists to stage the demonstration for around 15 minutes.

Activists also displayed a replica of a commemorative plaque installed in 1936 at the spot where the proclamation took place. The event could still be considered illegal under COVID-19 social distancing regulations.

Another protest was planned near the palace, and police said they were monitoring rallies in at least 12 other provinces.

Government and police had made warnings ahead of the day, making it clear that such activities would be considered subversive and undermining the country's constitutional monarchy, but did not move to directly stop protests.

Why is the anniversary significant?

Thailand, formerly known as Siam, has seen a steady rolling back and removal of symbols relating to the 1932 Revolution in the last few years. The current king holds immense power and criticizing the royal family can be punished by 15 years in prison.

The government has been led by army commander Prayuth Chan-ocha since he seized power in a 2014 military coup. He was democratically elected in 2019 in an election that has been described as free but not fair.

Many of those attending the rally were vocal critics of Prayuth's five-year junta and believe that the king and the military still wield more power than is fair or legal in a constitutional monarchy.