Coronavirus: Europe′s forgotten Roma at risk | Europe | News and current affairs from around the continent | DW | 04.04.2020 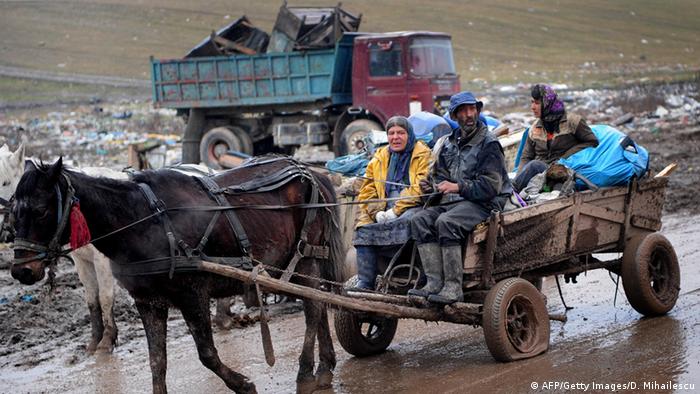 People with preexisting medical conditions are most at risk of contracting COVID-19, as well as those working in the health care sector. But in Europe, another group is in particular danger — and yet, they've been mostly overlooked.

Millions of poor Roma in Central and Southeastern Europe, most of whom live in cramped conditions without access to health care and basic sanitation, are facing a humanitarian disaster. Those who already earn a meager living by collecting junk and plastic or selling food, household products and flowers are currently unable to carry out even this informal work.

The community, which suffers racism and discrimination at the best of times, is now being treated with even more stigmatization. On top of general measures to prevent the spread of COVID-19, authorities in Slovakia, Romania and Bulgaria have introduced additional restrictions to put Roma communities under quarantine, sometimes resorting to the use of police and military force.

Roma rights groups across Europe are alarmed. The Central Council of German Sinti and Roma recently expressed concern that "right-wing extremist and nationalist politicians in Central and Southeast Europe would use the current corona crisis to legitimize and implement their racist government action."

"Instead of seeking additional ways to protect these particularly vulnerable members of our societies as coronavirus spreads, some politicians have actively fueled anti-Gypsyism," said Czech MP Frantisek Kopriva, the rapporteur for the Parliamentary Assembly of the Council of Europe on discrimination against Roma and Travellers in the area of housing, in late March.

An estimated 10 to 12 million Roma live in Europe, making up the continent's largest minority group. About half live in seven countries: Czech Republic, Slovakia, Hungary, Romania, Bulgaria, Serbia and North Macedonia. This is also where some of the most infamous Roma settlements are located, for example Lunik IX on the outskirts of Kosice in eastern Slovakia, Stolipinovo in Plovdiv, Bulgaria, Ferentari in the Romanian capital, Bucharest and Shuto Orizari near the North Macedonian capital, Skopje.

In all these settlements, families live in extremely cramped conditions, with three or four generations often sharing only one or two rooms. Infrastructure is poor, there is little access to clean, running water and sewage systems are broken or rudimentary at best.

These are ideal conditions for the spread of the contagious coronavirus. But instead of trying to prevent the pandemic from spreading by remedying the substandard conditions, the authorities are using repressive measures to clamp down further on Roma communities.

Zeljko Jovanovic, director of the Open Society Roma Initiatives Office in Berlin, said it would be catastrophic if the Roma population continued to be neglected. "The majority society has not yet understood that unemployment among Roma is bad for the whole economy, and right-wing extremist attacks against Roma are bad for democracy," he told DW. "Now, it has to become clear that poor health conditions for Roma have direct and immediate consequences for non-Roma."

Slovakia's new center-right populist coalition government has acknowledged the problem, but has resorted to dubious methods to address it. Earlier this week, Prime Minister Igor Matovic announced mass COVID-19 testing in 33 Roma settlements, especially for those people who had just returned from abroad. The tests were scheduled to begin on Friday, and would be carried out by military doctors accompanied by soldiers. Depending on results, people would either be quarantined in state-run institutions, or whole settlements would be placed under quarantine.

Matovic insisted the use of the military to impose these measures was not a "state demonstration of strength," but was to ensure the safety of the Roma themselves. Abel Ravasz, the government's former emissary for the Roma communities, told the Slovak news portal Parameter that the use of the army would only further stigmatize the Roma instead of giving them the impression that the state was their partner.

In Romania and Bulgaria, police have cordoned off several of the larger Roma settlements. Many inhabitants had come back from abroad in recent days and violated the quarantine regulations. In the Roma community of Tandarei, in southeastern Romania, dozens of masked police are now patrolling the streets. The situation is the same in the Roma districts of Nova, Sagora, Kazanlak and Sliven in Bulgaria.

Throughout the region the state has provided little help to the Roma, though there have been some exceptions. In some parts of Slovakia local authorities have provided access to clean water with mobile units, while in Cluj, Romania the city distributed packages containing food and sanitary products to 300 families living on the outskirts near the landfill.

In Hungary, Roma rights activist Aladar Horvath has called for a special social program for the inhabitants of segregated settlements. In a letter to the government and President Janos Ader, he proposed a nine-point crisis management program. "In the ghettoized areas, people have no savings, no provisions and no medical care. People are worried that they will soon not be able to feed their children," he wrote.

He has yet to receive an answer.

Coronavirus in Mexico: Street vendors agonize over health or livelihood

A large number of Mexicans eke out a living as street vendors in Mexico City. The coronavirus outbreak has made their job even more precarious. Do they risk their lives to save their livelihood? (02.04.2020)