Cologne on a Friday afternoon in late June. Full streets in the commercial district, hardly a free table in the cafes.

Life has returned to the Cologne Philharmonie too, one of Germany's largest performance venues for classical music. The West German Radio (WDR) Symphony Orchestra has invited an audience to its first concert in coronavirus times — actually to two: Under principal conductor Christian Macelaru, the orchestra performs separate hour-long concerts with different playbills, one at 6:00 and the other at 9:00 p.m.

To reduce contact among concert visitors, both are intermission-free. The double-barreled event offers more people exposure to live music after a three-month abstinence. Most concert-goers have moved over to the internet, and music festivals, if not canceled, have had to rethink themselves.

Many music lovers are disappointed that tickets aren't available on the free market. According to regulation, only 440 of the hall's over 2,000 seats may be filled, so audience candidates were chosen in a lottery of subscription holders. Demand must have been high; many had to stay away. Only about one out of three got lucky. 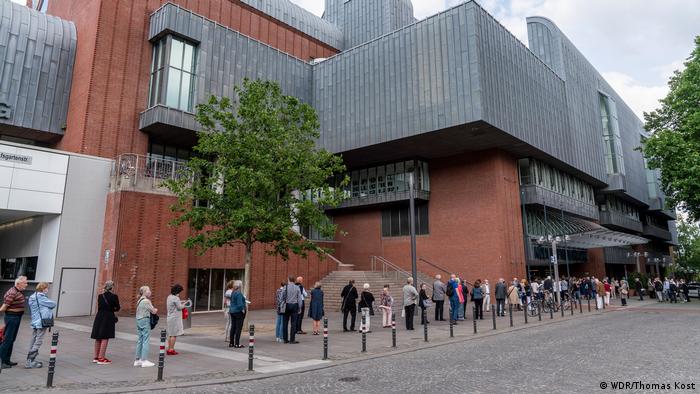 Social distancing in line outside the Philharmonie

Forty-five minutes before the concert begins, the select few form a highly-disciplined and record-setting line stretching back at least 150 meters (490 feet). The mood is solemn, hardly anyone says anything. Some of the ladies wear facial masks to match their evening dresses, showing a bit of elegance. The gentlemen stick with the standard black, also in their masks.

Only the select few get in

As specified in the online registration, each visitor is to bring along his pre-printed ticket and a filled-out registration form with name, contact information and a signature declaring that the holder is symptom-free. A few hopeful onlookers hold up signs indicating their desire to acquire a ticket — in vain. 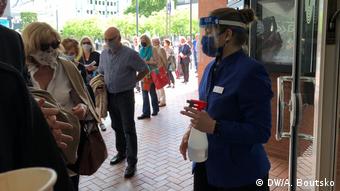 Entering the foyer, blue-clad women in the employ of the Philharmonie generously spray disinfectant on outstretched hands. Their colleagues take over, leading visitors to their seats. The unassigned seats in the amphitheater are gradually filled, from the front rows to the back ones high above. Those sharing a household may sit together. Between the little groups are gaps of three or four empty seats. Every other row is unoccupied.

"Boarding completed!" calls out a staff member just before 6:00 p.m. The musicians file onstage, 25 of the total 100 members of the WDR Symphony Orchestra. Strings, timpani, winds — all keep their distance. The last to appear is conductor Christian Macelaru, wearing a mask that he removes before raising the baton. Then, that first note...

The almost forgotten and overwhelming feeling of hearing live music again! No stream or recording can substitute that, no matter how well-produced. Despite the scaled-back orchestral forces, the sound is opulently rich. 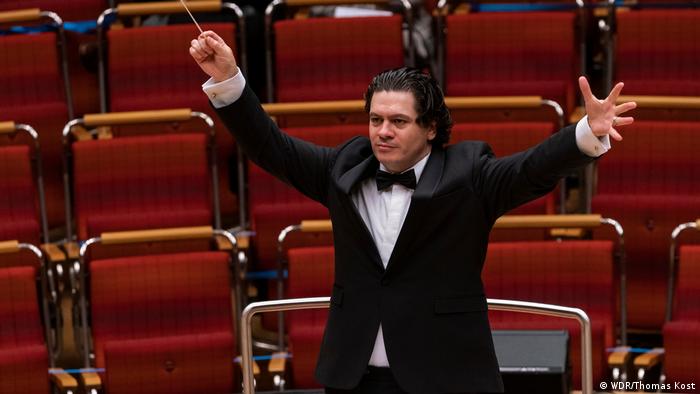 Back in action: conductor Christian Macelaru

On the playbill: otherwise seldom performed works for small orchestra — such as "Trittico Botticelliano" by the Italian composer Ottorino Respighi. "Normally these pieces aren't scheduled because you have a full-sized orchestra," explains Maestro Macelaru. Yet they are treasures: "You could fill programs with them for years." Not to be desired however — at least, if a pandemic is the reason.

After not quite an hour of listening to music, the audience expresses its gratitude with a storm of applause and leaves in an orderly fashion. The next concert is at 9:00 — this one with the pianist Igor Levit, who is greeted with clapping the moment he steps onstage. 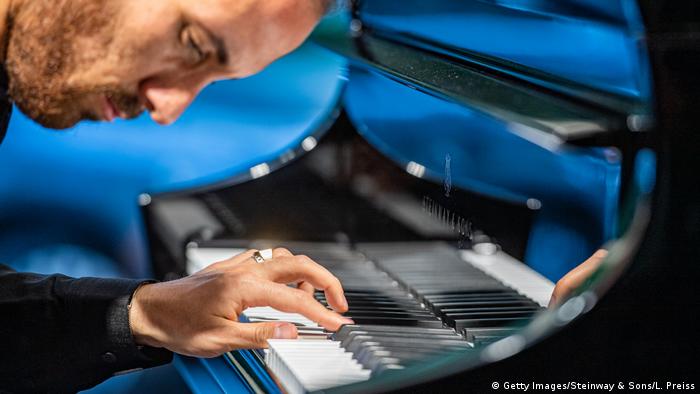 A lockdown hero, Igor Levit's house concerts on Twitter have given musical sustenance to many over the interminable weeks of the pandemic. This time, as the soloist in an A Major piano concerto by Mozart, he fills the hall with his soft, gently undulating musical flow. Then the orchestra adds Schubert's Fifth Symphony to a concert that is over much too early. Masks back on, the guests file out, keeping at more than arm's-length distance

Since the beginning of the corona crisis, the star pianist has been giving house concerts from his living room that have slowly but surely achieved cult status. Now he's going one step further. (26.03.2020)

The musician will perform "Vexations," by Erik Satie, one of the longest pieces in the history of music. Levit wants to raise awareness of the struggles musicians are enduring amid lockdown. (30.05.2020)