People are asked to stay at home and avoid social contacts to stop the spread of the unusual coronavirus. Meanwhile, musicians are getting creative. 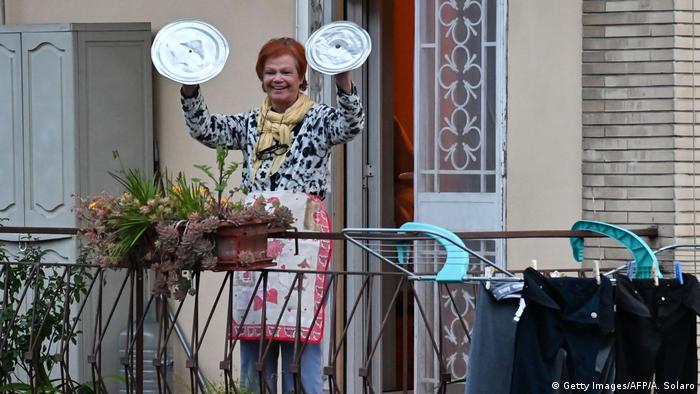 The coronavirus pandemic is very serious, but it's part of human nature to deal with even the worse situations with humor and creativity. The viral videos of Italy's "balcony singers" demonstrate this well.

Now that even the most intimate concerts have been cancelled in Germany, a growing number of artists are offering a live-stream of their music.

Among the forerunners of this trend, star pianist Igor Levit has been streaming almost every evening concerts to his 58,000 Twitter followers, garnering thousands of likes.

British crooner James Blunt also offered a live broadcast version of his concert in an empty Elbphilharmonie; it was watched by millions.

Smaller bands who've cancelled their gigs because of the coronavirus have been offering live streams of performances in their apartments.

To allow independent musicians, concert organizers and small venues to survive, people who've bought concert tickets are recommended to show their support by not claiming a refund despite the cancellation of the events.

Humor in times of crisis

Many humorous musical videos are also being shared online, from rapped songs on washing hand to parodies of famous pop songs, such as The Knack's "My Sharona" (1979), which can easily be switched to "My Corona."

Musicians and music fans worldwide have been posting parodies and serious songs online, with some of them obtaining millions of clicks.

A growing number of Spotify users have also been creatively reacting to the outbreak with their playlists. Classic hits take on a new meaning amid the crisis — from "Toxic" by Britney Spears to "Don't Stand So Close To Me" by The Police, from "Down With The Sickness" by Disturbed to "Heal The World" by Michael Jackson.

Described as "The sickest playlist on the worldwide web," the Spotify playlist "COVID-19 Quarantine-Party" created by user @chadwickjohnson has 85,000 followers.

There are dozens of similar playlists. Spotify user Raphael Angelo Fernandez Rios, who usually doesn't draw much attention with his lists on the music streaming platform, drew 8,000 followers with his list labeled "Coronavirus beats to panic to."

For all music lovers, there's reassuringly still tons of good beats and timeless melodies out there to accompany us through this exceptional crisis and all the bad news that comes with it.

A London-based German scientist is studying the spread and severity of COVID-19. In an interview with DW, Stefan Flasche explains the way he's using math and computers to help to predict how the disease may evolve. (16.03.2020)

Global travel has come to a standstill in the coronavirus crisis. Many countries are imposing an entry ban on foreigners. Even within Europe most borders are closed. Is it still possible to travel? (16.03.2020)