Coronavirus code: Computer modeling could help fight the virus | Europe | News and current affairs from around the continent | DW | 17.03.2020

A London-based German scientist is studying the spread and severity of COVID-19. In an interview with DW, Stefan Flasche explains the way he's using math and computers to help to predict how the disease may evolve. DW: You work at the intersection of mathematics and epidemiology at the London School of Hygiene and Tropical Medicine and you have modeled the virus for a few months now. What you have learned about COVID-19?

Stefan Flasche: We are looking at the spread and attributes of the virus, which includes the severity. The outbreak on the cruise ship in Yokohama in Japan helped us understand the disease in a confined setting where you have the ability to test everyone. This leads us to believe that the infection-to-fatality ratio overall across age groups is in the ballpark of 1% percent which is really age dependent. The risk is much lower in younger age groups and increases drastically for older individuals. It gradually increases from 50 and the cut off is 60 plus where the risk is really high when you catch it.

We've been hearing a lot about the reproduction number. What is that?

One of the key parameters in mathematical modelling is what we call the reproduction number (r). It's the number of secondary cases an average infected person would cause in a completely susceptible population. If that is bigger than one, you infect more than one person. Estimates diverge a bit. The earliest numbers showed that one infected person would infect 2-2.5 people. 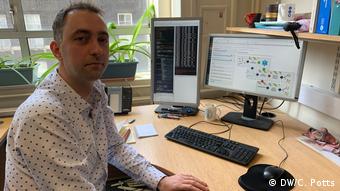 Do the math: "It will likely get worse before it gets better," says Flasche

What makes it difficult to predict the number of overall cases?

There may be individuals who will not show any obvious clinical signs of the disease and still may be able to spread it. And it is inherently difficult to target those. Our research suggests that 10-30% of overall transmissions may be coming from people who haven't developed symptoms. Containment strategies focus on those showing symptoms. So that means you are missing a relatively large chunk of people who can transmit. That may be one of the reasons why containment has failed almost everywhere.

Is that why the situation is so bad in Italy?

In Italy a couple of cases slipped through the net and very early on passed on the disease without anybody realizing. If you have a first person dying in your country that means that you've probably missed an average of about 100 people at least two weeks earlier who were infected because it takes a while for a person to develop symptoms to get severe enough for the person to actually die. In the meantime infections will have spread with a reproduction rate of about 2 and therefore we have exponential growth. By the time you find one death, you have about 1,000 cases.

What can we learn from China and South Korea where the virus spread a lot earlier than in Europe?

In China and South Korea the number of cases is decreasing. This is very interesting for the control of COVID-19 globally. Those countries have managed to curb the outbreak with some very drastic measures of social distancing. In a scenario of an uncontrolled spread is the health care system is overwhelmed. Delaying the speed of the spread and reducing the peak size is helpful to help the health care system cope. But it also buys us time for treatment and preventive measures such as vaccines.

It's good news because social distancing is effective. But at the same time it's problematic, because it means as soon as those restrictions are lifted, there will be major upsurge in the number of cases — because the population hasn't built up any immunity. As soon as you relax [the restrictions], there will likely be a major resurgence which puts governments in a very difficult position. The measures are very drastic and have a major impact on every day life and the economy. So you can only uphold those measures for a certain amount of time.

The problematic thing is if you start school closures and call off big events too early, you will need to maintain those for a very, very long time. And therefore it's likely that policymakers are hesitant to introduce [certain] measures until it is absolutely necessary.

Here you can see the worldwide spread.

We have seen a number of countries issue travel restrictions or close their borders. Is that going to have an impact?

Travel restrictions have the goal of limiting the amount of infected people entering a setting. And those can make sense if the number of people who are infected is very low. Because then you limit the chance of someone spreading the disease and your containment measures are not overwhelmed by too many people who need to be identified and contact-traced. Once a setting moves to a phase where there is evidence for a sustained spread in the community, an extra few cases coming in from the outside will not make any difference.

Is there anything else that can be done?

Another way that is less drastic but would do less to curb the overall spread would be to focus on risk groups. We commonly do this in infectious diseases. Where there are particular groups at risk, those are the ones who get the vaccines or the expensive treatments. A potential strategy for COVID-19 is that if we can't alter the outbreak itself, we try to cocoon those most affected, meaning complete isolation of the elderly population from our society as much as possible.

So the virus is here to stay?

That's what we are planning for. It seems to be possible to get the measures in place to curb the spread but they need to be very drastic and unless they can be implemented in that way, it will stay for quite a long time. It's very difficult to predict how long. There is no evidence that this is going to die down in the summer.

You've been working on this for months. Are you worried?

We all should be worried. It's likely to get worse before it gets better. The important thing for everyone now is to stay rational. And to get their information from a reliable place.

Stefan Flasche is Associate Professor at the London School of Hygiene and Tropical Medicines. His research focuses on the mathematical modelling of infectious diseases. He has worked on pneumococcal vaccination, outbreak response (swine flu and Ebola) and advising the WHO on modelling (including dengue and malaria).