Coronavirus digest: Vaccinations in Germany will take 'over a year'

It will take until 2022 to vaccinate all of Germany's population, the head of the country's vaccine panel said. Meanwhile, Britain became the first country to approve a vaccine. DW rounds up the latest developments. 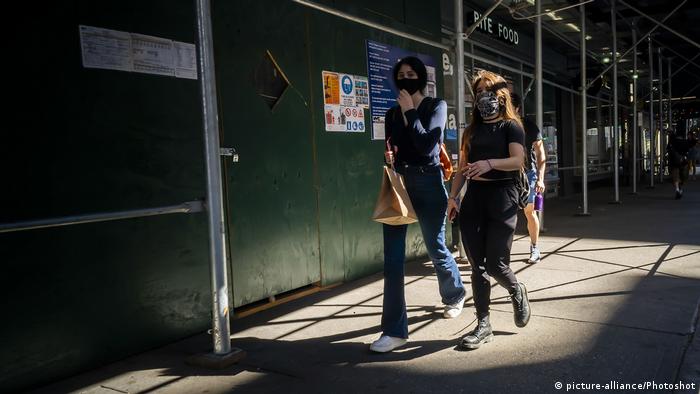 It will take until 2022 to vaccinate the whole population of Germany against COVID-19 due to capacity limits, according to the head of Germany's vaccine panel.

"If you can administer shots on 150,000 to 200,000 people a day, so on five or six days a week – assuming vaccines are available and people are willing to be vaccinated – then you can calculate how long it will take," Thomas Mertens, head of STIKO, Germany's expert panel on vaccine use, told the Rheinische Post. "Then you would need 100 days to vaccinate 15 million people."

Germany is currently preparing vaccination centers across the country so it can start offering the shots as soon as a vaccine is approved in Europe.

Britain said it approved the Pfizer-BioNTech vaccine for use and that it will be rolled out from next week. The move makes Britain the first country to approve a vaccine, as it works to curb Europe's deadliest virus outbreak. The UK has recorded over 1.6 million cases and 59,000 deaths since the start of the pandemic.

Italy is set to adopt tighter restrictions over the Christmas and New Year holiday season to prevent a third wave of infections, Health Minister Roberto Speranza said. He spoke of "disincentives" to travel abroad and between Italian regions, and of stricter limitations on Christmas Day, Boxing Day and New Year's Day.

During those days, out-of-town movements will be restricted, the minister said.  "If we drop our guard, a third wave is around the corner," he added.

The CDC also announced it would be cutting down its recommended quarantine period after potential exposure to COVID-19 from 14 to 10 days, or seven days if the person has tested negative.

US officials on Tuesday revealed plans to inoculate millions of Americans, starting as early as mid-December. Hospitalizations and infections have reached record highs in the country.

"Within 24 hours, maybe at most 36 to 48 hours, from the approval, the vaccine can be in people's arms," a former GlaxoSmithKline executive told The Washington Post.

About 60 to 70 million doses could be available per month starting January 2021, after the vaccines from Pfizer and Moderna receive regulatory approval, said the executive.

The chief adviser of the Trump administration's Operation Warp Speed program said on Tuesday that 20 million people could be inoculated by the end of 2020. He added that by the middle of 2021 most Americans will have access to highly effective vaccines.

Here is a roundup of the other latest developments on the coronavirus pandemic.

Brazil's Health Ministry announced that healthcare workers, indigenous people, and those above the age of 75 will be at the frontline to receive a vaccine. The country has unveiled a four-stage plan for national immunization.

People aged 60-74 will be vaccinated in the second stage, and those with prior health conditions will receive the dose in the third stage. The final stage would include first responders, teachers, and also prison staff and inmates. The four stages would cover 109.5 million people out of Brazil's population of 212 million. The vaccine would then be administered to the rest of the population.

The UN General Assembly has urged all member states to designate seafarers as "key workers" in order to ease their conditions. During the pandemic, nearly 400,000 seafarers and crew have been stranded at sea.

Indonesian Ambassador DianTriansyah Djani told Associated Press that travel restrictions imposed due to the pandemic have caused "difficulties for crew changes, and prevent the seafarers from embarkation and disembarkation.”

The UN said that the need for humanitarian aid has risen to unprecedented levels this year, owing to the pandemic. About 235 million people will require help in 2021 according to projections.

The Interpol global police coordination agency warned that organized criminal networks could target vaccines, and could look to sell fake shots. Interpol said it had issued a global alerrt to law enforcement across its 194 member countries, warning them to prepare for organized crime networks targeting vaccines, both physically and online.

A team of scientists from the University of Pennsylvania and biotech firm Regeneron are testing whether gene therapy can be used to produce a nasal spray that can prevent coronavirus infection.

A weakened virus will be used to carry genetic instructions to the nose and throat, which will help create powerful antibodies. "The advantage of our approach is that you don't need a competent immune system for this to be effective," James Wilson, a professor from the University of Pennsylvania told AFP.