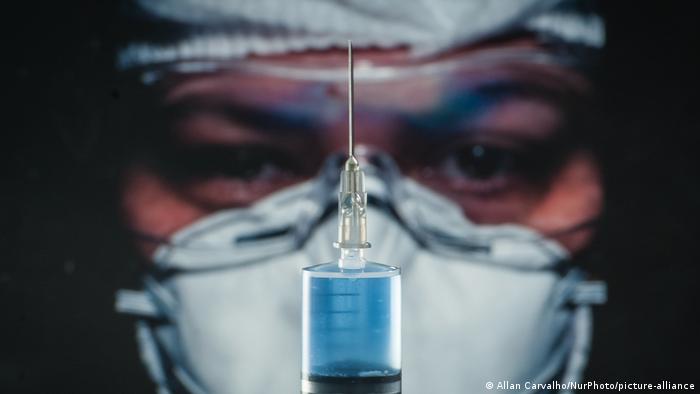 Rocca urged governments and institutions to actively combat "fake news" about a COVID-19 vaccine, pointing to a "growing hesitancy" about vaccines in general around the world.

He cited a Johns Hopkins University study in 67 countries that found acceptance of a vaccine in many countries, including France and Japan, was declining. In a quarter of the countries, acceptance was below 50%.

"We believe that the massive, coordinated efforts that will be needed to roll out the COVID vaccine in an equitable manner need to be paralleled by equally massive efforts to proactively build and maintain trust,'' Rocca said. 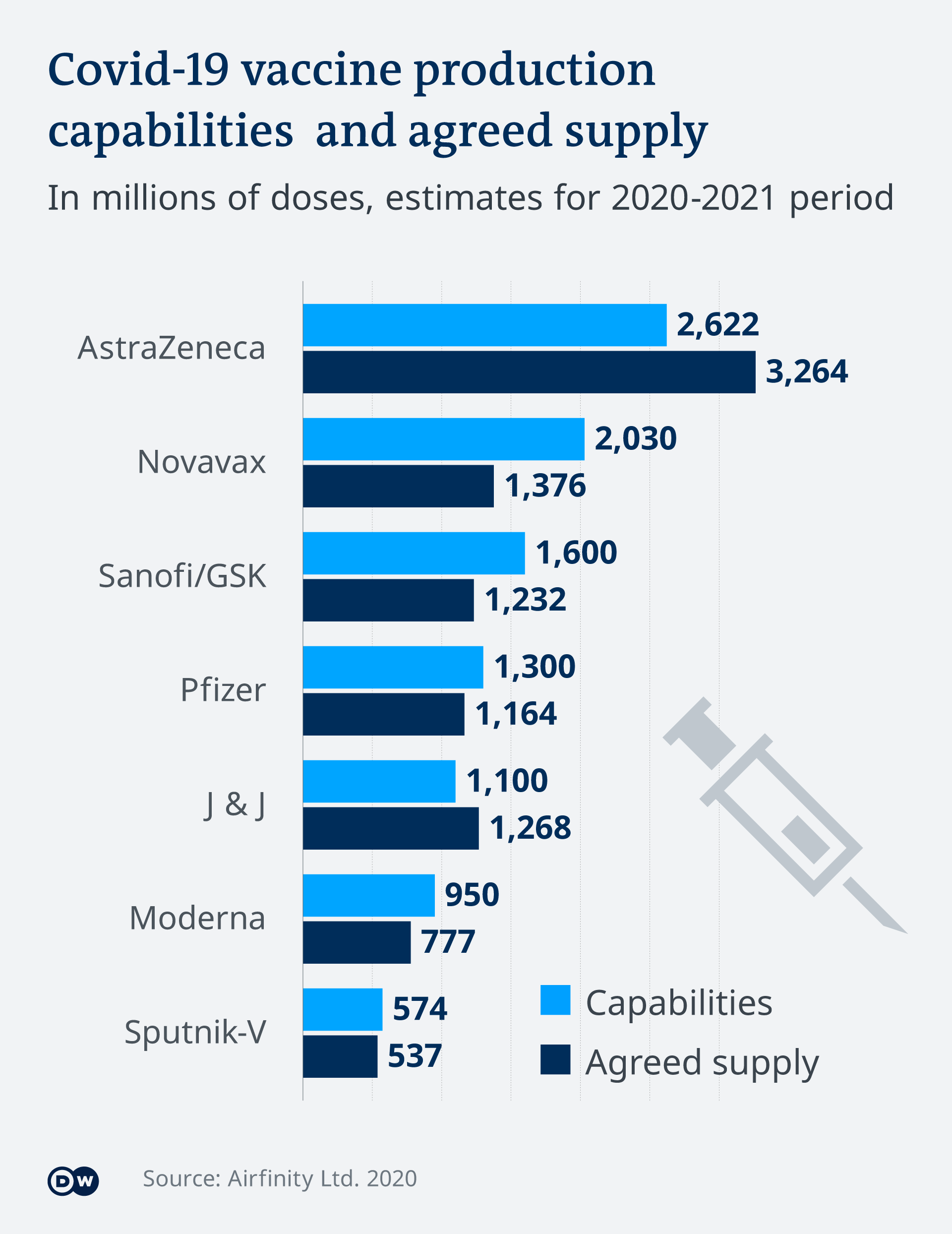 Formular 1 world champion Lewis Hamilton has tested positive for the coronavirus and will miss the Sakhir Grand Prix this weekend as a result. His Mercedes-AMG Petronas Team said in a statement that the 35-year-old woke up on Monday with mild symptoms and is in isolation in Bahrain, where he won the Grand Prix on Sunday.

Here's a roundup of other developments around the world.

The Robert Koch Institute has reported more than 13,600 new coronavirus cases in Germany from Monday to Tuesday, bringing the total number of cases to over 1,067,000 since the pandemic began. Out of that, 758,800 people have recovered. The death toll over the past 24 hours rose by 388 to a total of 16,636.

The German government has agreed to set up 19 locations for medical gear storage in order to avoid the lack of masks and other protective equipment faced by most of the world at the start of the coronavirus pandemic.

The head of the European Center for Disease Prevention and Control, Andrea Ammon, said the latest surge of coronavirus infections across Europe is flattening or going down in some but not all countries. However, she added it was too early to relax current virus restrictions.

Croatia's Prime Minister Andrej Plenkovic has tested positive for the coronavirus, a government spokesperson said. Plenkovic is reportedly feeling fine and will continue to perform his duties from home.

Turkish President Recep Tayyip Erdogan announced the most widespread lockdown so far as infections continued to rise. The new measures will kick in from Tuesday and will include extending curfews to weeknights, and full lockdowns on weekends.

Canada's budget deficit is projected to balloon to a record Can$382 billion ($284 billion, €246 billion) in the 2020-21 fiscal year as government spending skyrockets to combat the economic fallout of the coronavirus pandemic.

"When the virus is under control and our economy is ready for new growth, we will deploy an ambitious stimulus package to jump-start our recovery," Finance Minister Chrystia Freeland told the House of Commons.

Scott Atlas, a coronavirus adviser of US President Donald Trump, announced his resignation from the White House post on Monday evening. Atlas, who lacked relevant experience or qualifications in public health or infectious disease, had sparked controversy over his remarks against mask-wearing and other measures to control the coronavirus outbreak.

US biotech firm Moderna said it was applying for emergency authorization from US and European regulators to allow the use of its COVID-19 vaccine as the final trial data showed its vaccine to be 94.1% effective.

US Treasury Secretary Steven Mnuchin called on Congress to use the untapped $455 billion to provide economic assistance to American households and businesses.

California Governor Gavin Newsom said he may impose tougher coronavirus restrictions over the next two days, including a possible stay-at-home order as the state was at a "tipping point" in the COVID-19 pandemic.

In contrast, Florida Governor Ron DeSantis said that schools will be required to remain open despite the spike in cases and hospitalizations.

The WHO chief has said that Mexico was in "bad shape" regarding the coronavirus as infections and fatalities surged across the country. "The number of increase in cases and deaths in Mexico is very worrisome," WHO Director-General Tedros Adhanom Ghebreyesus said.

North Korean leader Kim Jong Un, and his family, have reportedly been given an experimental coronavirus vaccine developed in China, according to an American North Korea analyst, Harry Kazianis, who citied two unnamed Japanese intelligence sources.

"Kim Jong Un and multiple other high-ranking officials within the Kim family and leadership network have been vaccinated for coronavirus within the last two to three weeks," Kazianis wrote in an article published on the national security news website 19fortyfive.

It was unclear which company had supplied its vaccine candidate and whether it had proven to be safe, he added.

North Korea has never confirmed having any coronavirus infections, but South Korea's National Intelligence Service (NIS), has said the reclusive country had many exchanges with China before shutting the border in January.

The NIS has also said it has stopped North Korean hackers from attempting to hack into South Korean vaccine makers.

In Australia, residents from the two most populated states, New South Wales (NSW) and Victoria, can now freely travel to Queensland for the first time in more than eight months.

Road checks between Queensland and NSW were removed early Tuesday, as the first flights landed at Brisbane airport from the two states. As international travel to Australia is still banned, Queensland, a popular vacation destination, is hoping for a boost from domestic travel.

Hong Kong leader Carrie Lam has urged people to stay at home and avoid unnecessary gatherings, a day after the government announced tighter restrictions, including bans on groups of more than two people.

Although Hong Kong has only reported around 6,300 COVID-19 cases, city officials respond quickly to any sign that case numbers are rising in the densely populated city of 7.4 million. Hong Kong has seen a rise in cases after weeks of single-digit or low double digit numbers, with 74 cases reported Monday.

Health experts have expressed disappointment over Pakistan's failure to address the issue of malnutrition and children's stunted growth. Coronavirus, inflation and unemployment have exacerbated the situation. Click here for the full report.

HIV infection rates are falling in many African countries, and effective drugs are increasing the life expectancy of patients. But the coronavirus pandemic has meant a major setback in the fight against AIDS. Click here for the full report.

Domestic abuse spikes during the holidays and the coronavirus lockdown will only make things worse. One quarter of all women experience abuse in their lives, and lockdown measures are making it harder to get help. Click here for the full report.

A vaccine jointly developed by German company BioNTech and US firm Pfizer has proven to be 90% effective at preventing COVID-19 infections, according to phase 3 trials.