Coronavirus digest: US to lift restrictions for vaccinated travelers in November | News | DW | 15.10.2021 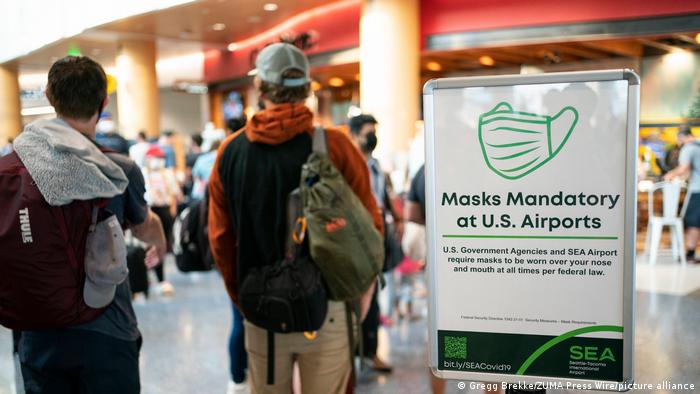 The White House on Friday announced that the easing of coronavirus travel restrictions will come into effect on November 8.
Authorities put restrictive measures in place to help curb the spread of the virus in early 2020.

The announcement clarified that the easing included both land and air travel.

Nonessential journeys from Mexico and Canada have been blocked for about a year and a half.

Now vaccinated visitors from the so-called Schengen countries in Europe, as well as China, India and Iran, among others, may now once again enter the US.

The US has lagged behind many other countries regarding the lifting of travel restrictions. Unvaccinated travelers will still be barred from entering the country.

Germany is seeing high COVID-19 incidence rates among children and adolescents in some parts of the country, the Robert Koch Institute for infectious diseases reported.

The seven-day incidence rate among adolescents aged 10 to 19 is more than 500 per 100,000 people in eight areas, the RKI said Thursday evening. The agency gave no information on the possible reasons for the high numbers.

A map tweeted along with the statement showed the affected areas were in eastern and southern parts of Germany.

For the rest of the country, the incidence rate for those under 20 has decreased slightly.

The RKI also spoke of 636 outbreaks at schools around Germany over the past four weeks.

Germany has allowed COVID-19 vaccines to be administered to those aged 12 years old and over. However, the vaccination rate for 12- to 17-year-olds is still significantly less than among the adult population.

Children are unlikely to get seriously ill from COVID-19 than adults, and many parents feel there are unanswered questions about the long-term consequences of getting the jab.

The United Kingdom is also seeing a significant number of COVID cases among young people. Broadcaster Sky News reported Thursday that cases in those aged 10 to 19 stood at 1,120 per 100,000 people in the seven days to 10 October. The incidence rate for 5- to 9-year-olds is 574.

Normality without COVID-19 will only come very slowly

German pharmaceutical Bayer has terminated a vaccine manufacturing partnership under which it would have helped produce CureVac's COVID-19 shot, the Rheinische Post reported Friday, citing a company spokesperson.

The news comes after CureVac earlier this week said it will give up on its first-generation vaccine and instead focus on collaborating with British drugmaker GSK to develop improved mRNA vaccine technology.

Despite the company specializing in mRNA technology, it was revealed this summer that the CureVac shot yielded a disappointing 47% efficacy rate.

Bayer had said in February that it expected to produce 160 million doses of the CureVac shot in 2022 at its Wuppertal site in western Germany.

There have been protests in Italy over the implementation of workplace health passes. All workers are expected to carry a so-called green pass showing proof of vaccination, a recent negative test, or recovery from COVID-19 in the past 6 months.

Protests were largely peaceful around Italy. Some of those who took part say the measures are an affront to the constitution.

The rules are designed to prevent people from catching the virus at work and thus needing to quarantine collectively.

Earlier in the month protests over the health passes descended into violence, resulting in the arrest of far-right leaders.

Unvaccinated people in France will have to pay for COVID-19 tests from Friday, unless they have a medical reason to not get vaccinated. The government said the tests are being misused as a substitute for vaccination, at cost to the public purse.

A rapid test will now cost between €22 and €30; a PCR test €44. In Germany, a similar regulation with an end to free tests for all has been in effect since Monday.

The end of free tests in France coincides with the largest spike in COVID-19 infections since July, according to Health Ministry figures.

Within the past 24 hours, there have been well over 6,000 new case which represents an increase of 36% when compared to over 4,400 cases the same time last week.

Latvia's President Egils Levits has contracted the virus despite being fully vaccinated, his chief of staff said Thursday. The head of state took a PCR test after returning from a visit to Denmark and Sweden. He has only shown mild symptoms.

The news forced Finland's President Sauli Niinisto to isolate as well, as the pair had lunch together on Wednesday. 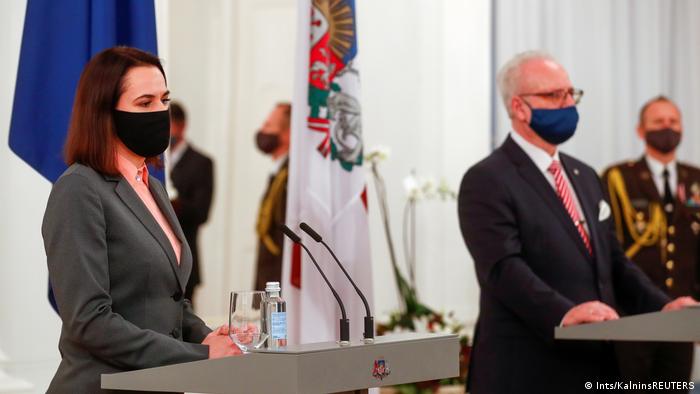 Serbia is making the most of the growing phenomenon of "vaccine tourists."

According to official figures, some 160,000 foreigners, mainly from Balkan states, have traveled to Serbia to get the COVID-19 jab.

Serbia has managed to secure vaccines from a number of different suppliers, which has led to a boom in visitors looking for choice.

South Korea never imposed a full lockdown, but has been under its tightest-yet social distancing curbs since July, when the fourth wave of infections started.

A new panel established this week is drawing up a plan for a gradual return to normal by November, when it is hoped that 80% of the adult population will be fully vaccinated.

Sydney will scrap all quarantine requirements for international travelers from next month, officials said Friday, an abrupt step toward reopening Australia's long-shuttered borders.

In a surprise announcement, New South Wales Premier Dominic Perrottet said that from November 1, vaccinated travelers will  be allowed to enter the state without quarantine of any kind.

Since March 2020, travel to and from Australia has been virtually banned, and anyone who gains permission to enter must fork out many thousands of dollars and agree to quarantine in a hotel room for 14 days.

Biden said the doses will be in addition to 50 million the US had already donated to the regional bloc, which has 55 member states and a combined population of 1.3 billion people.

Of 5.7 billion doses of coronavirus vaccines administered around the world by mid-September, only 2% had been in Africa.

Nigeria has received 501,600 doses of AstraZeneca's COVID-19 vaccine from the French government through the COVAX vaccine-sharing scheme. COVAX, which is backed by the World Health Organization, aims to secure billions of doses for lower-income countries by the end of 2021.

A government spokesman said the country also received 434,400 doses of the J&J vaccine from the African Union. Meanwhile, the US has donated 3.6 million doses of the BioNTech-Pfizer vaccine, two months after it shipped 4 million doses of Moderna's vaccine to Africa's most populous nation.

About 2.3% of Nigerians, or 2.54 million people, have been fully vaccinated as of Thursday. 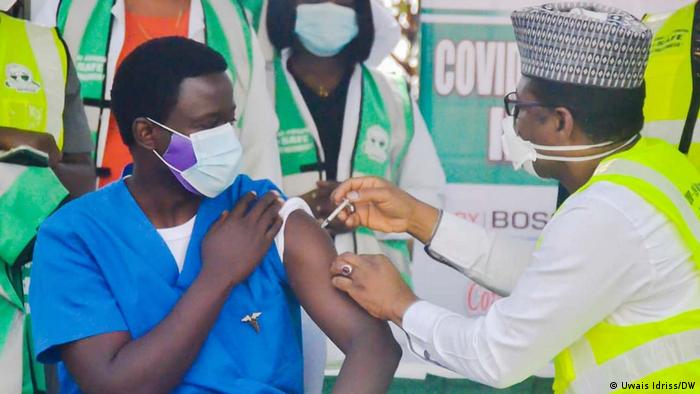 In the United States, a panel of experts on Friday recommended booster shots of the J&J COVID-19 vaccine. The panel has expressed concern that people who have received single doses are not as well protected as those who have been given two doses.

The Food and Drug Administration advisers voted unanimously that a booster shot should be offered without a firm time frame. The recommendation applies to people aged 18 and over.

On Thursday, the FDA panel backed Moderna's anti-COVID vaccine for certain at-risk groups. The decision comes a month after the advisory committee made a similar decision for the BioNTech-Pfizer shot.

The groups include people over 65, people aged between 18 and 64 who are at a higher risk of becoming severely ill, and those whose work may involve frequent exposure to the virus. The booster can be administered six months after the second injection of Moderna's vaccine.

Meanwhile, there's concern among some police departments in the US over levels of resistance to government’s vaccine mandates.

Police unions and some officers have filed lawsuits to block the measures that require public workers to report their vaccination status by Friday.

In Seattle, detectives and other staff had to attend emergency calls due to a shortage of patrol officers. Local police unions are concerned the patrol officer shortage will worsen because of the mandates.

In Los Angeles, Sheriff Alex Villanueva said he would not be forcing thousands of employees to be vaccinated.

The US Navy said Thursday that personnel who refuse to be vaccinated will be expelled from the force.

The Navy said that 98% of its 350,000 active duty members had begun or completed the vaccination process. It has set a November 28 deadline for enlistees to be fully vaccinated.

If all US military services take the same hard line that the Navy is taking, it could risk losing as many as 46,000 troop members.

Heavily reliant on tourism, Southeast Asian nations are looking into ways to kick-start the vital economic sector, which has been battered by the pandemic.

The team of 26 scientists is set to revive the stalled investigation into the origins of the virus. Meanwhile, Brazilian President Jair Bolsonaro confirmed that he will not be vaccinated. Follow DW for the latest.