The team of 26 scientists is set to revive the stalled investigation into the origins of the virus. Meanwhile, Brazilian President Jair Bolsonaro confirmed that he will not be vaccinated. Follow DW for the latest. 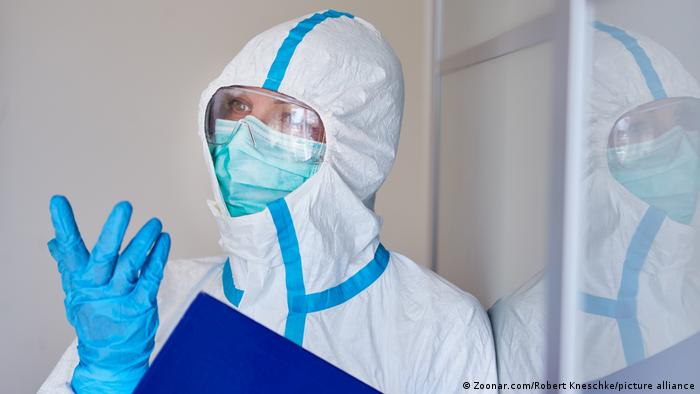 The World Health Organization on Wednesday unveiled a team of 26 scientists to revive the stalled investigation into the origins of COVID-19.

The group is also set to investigate new pathogens and ways to prevent future pandemics.

A growing number of high-risk pathogens have appeared or reappeared in recent years, including MERS, bird flu viruses, Lassa, Marburg and Ebola. The WHO announced earlier this year that it would set up a Scientific Advisory Group for the Origins of Novel Pathogens (SAGO).

"The emergence of new viruses with the potential to spark epidemics and pandemics is a fact of nature, and while SARS-CoV-2 is the latest such virus, it will not be the last," said WHO chief Tedros Adhanom Ghebreyesus. "Understanding where new pathogens come from is essential for preventing future outbreaks."

The team's members include Christian Drosten, the head of Berlin's Institute of Virology, and Yungui Yang of the Beijing Institute of Genomics.

WHO expert Leendertz speaks about the origin of COVID

The United States Food and Drug Administration is wrestling with whether and when to offer another dose of the single-shot Johnson & Johnson vaccine, after a new study showed that using a different brand as a booster could be more effective.

In an online review, FDA scientists said they didn't reach a firm conclusion over whether there is enough evidence for boosters, citing shortcomings in Johnson & Johnson's data and little information on protection against the highly contagious delta variant. Next week, the FDA will make a final decision on authorizing those boosters and the Centers for Disease Control and Prevention will debate who should actually get them.

Brazilian President Jair Bolsonaro has confirmed he will not get vaccinated against the virus, having previously said he would be the "last Brazilian" to do so.

The far-right leader has stirred controversy over his handling of the pandemic, and for initially downplaying the seriousness of the virus despite catching it himself. He once claimed that the Pfizer vaccine could turn people into crocodiles.

"I've decided not to get vaccinated. I'm looking at new studies, I already have the highest immunization, why would I get vaccinated?" the 66-year-old said late Tuesday night in an interview with Jovem Pan radio. "It would be the same as betting 10 reais on the lottery to win two. It doesn't make sense."

The European Union on Thursday said it is starting a real-time review of AstraZeneca's COVID-19 medicine. The AstraZeneca therapy is designed for the non-infected and those who get the virus within a week of first symptoms, as an alternative to current vaccines.

The European Medicines Agency(EMA) said it "will evaluate more data on the quality, safety and effectiveness of the medicine as they become available."

President Vladimir Putin urged the need to speed up vaccination, as only 29% of the country's 146 million people are currently fully inoculated.

Despite this, Russia is ready to provide up to 300 million doses of its Sputnik V vaccine to the UN-backed COVAX initiative, a top Russian official promoting the shot said.

Sputnik V has been authorized for use in 70 countries around the world despite not being approved by the World Health Organization even for emergency use.

Production issues have also fanned customers' concerns worldwide. Some countries, especially in Latin America, have expressed fears lately that they are not getting the vaccine's second shot in time to properly inoculate people from COVID-19.

Romanian doctors have penned an open letter called a "cry of despair" as the country's overwhelmed and deteriorating health care system copes with a record surge of infections and deaths.

The College of Physicians of Bucharest, a nongovernmental organization representing doctors in Romania's capital, said in a letter addressed to Romanians that the medical system has "reached the limit" and that low vaccination rates reveal a "failure of trust" between doctors and the population.

"We are desperate because every day we lose hundreds of patients who die in Romanian hospitals,'' the letter said. "We are desperate, because, unfortunately, we have heard too many times: I can't breathe ... I'm not vaccinated.''

Latvia has hit a new all-time high of daily COVID-19 infections for a second day in a row Thursday, after the Baltic country's president tested positive on Wednesday evening.

Indonesia's popular holiday destination island of Bali said Thursday it would begin welcoming back tourists. However, there are currently no direct flights to the island. German passport holders have also not made it onto the list of 19 countries allowed to return to the island.

"According to the instruction of the President, we are allowing visitors from 19 countries to return to Bali and to the Riau Islands," said a statement from Indonesia's pandemic envoy, Luhut Pandjaitan, on Thursday. Its unclear why Germany has not made it onto the selected travel list.

Regarding direct flights to the island the international airport does not appear to be ready to accept incoming travelers, even after the 18 month break due to the global pandemic.

"The regulation has just been issued. These things take time," Bali's governor, Wayan Koster, told members of the media. "We hope that by the end of October at the latest there will be incoming flights," he added.

The island's governor did say that hotels had been accepting bookings for November.

Nigeria will require civil servants to show proof of vaccination or a negative coronavirus test to gain access to their offices from the beginning of December.

"An appropriate service wide advisory/circular will be issued to guide the process," Boss Mustapha, chairman of the presidential steering committee on COVID-19, said in a statement.

Nigeria has administered around 5 million vaccine doses to its 200 million citizens and is in the process of distributing more. The country, which has not tested widely for the virus, has recorded over 208,000 infections and 2,756 deaths.