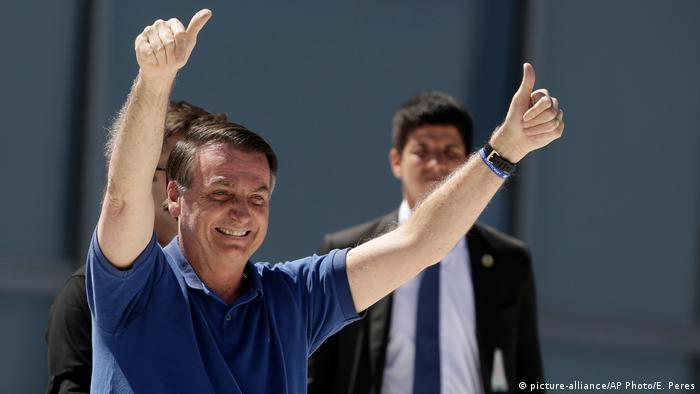 The coronavirus is nothing but a "little flu," everyone has to die sometime, people need to face the coronavirus "like a man" — Brazil's president, Jair Bolsonaro, got people's attention in recent months with these and several other trivializing remarks about COVID-19. At the same time, the coronavirus crisis is worsening in Latin America's most populous country. With more than 1.6 million people infected and more than 65,000 deaths due to the virus, Brazil is currently the second hardest-hit country by the pandemic after the United States.

Now Bolsonaro has the chance to face the coronavirus "like a man" — he said he was suffering from possible symptoms of COVID-19, including a fever of 38 degrees. That is why he submitted for a test, and announced on Tuesday that it came back positive.

The Band radio station reported that it was Bolsonaro's second test within a matter of days after the first one showed an infection.

It is not the first time that Bolsonaro, who always made light of the coronavirus threat, was tested. His first test dates back to early March when the right-wing populist returned from a meeting with US President Donald Trump in Florida.

Multiple members of the delegation that accompanied Bolsonaro on that trip ultimately tested positive for COVID-19, while the president himself tested negative. Proof came in May when the country's Supreme Court forced Bolsonaro to disclose the results — that is how much Brazilians distrust their leader.

Handshakes and hugs amid pandemic

The president himself did a lot to erode that trust and raise doubts about his accountability. The 65-year-old has repeatedly and harshly criticized the virus-related restrictions to everyday life — some of which have since been relaxed — imposed by states and municipal governments. Just a few days ago, he vetoed a law passed by Congress on nationwide regulations concerning the wearing of face masks in public.

Bolsonaro repeatedly disregarded the requirement to wear a face mask in the capital, Brasilia, and he ignored distancing regulations. While mass graves for coronavirus victims were being dug in Manaus, Sao Paulo and Rio de Janeiro, Bolsonaro met supporters in front of the presidential palace, hugging and shaking hands with his fans — without wearing a face mask.

His behavior drew widespread condemnation. In late June, a court threatened to fine the president if he didn't wear a face mask in public. But even then, Bolsonaro would not always comply. On Saturday, he published photos on social media showing him with several ministers and the US ambassador at a dinner to mark the American Independence Day — without a face mask.

One of Bolsonaro's most infamous assertions was that he, as former athlete — Bolsonaro was a paratrooper in the Brazilian army — need not worry about the risk of coronavirus infection. His remarks triggered a series of sarcastic comments on social media. Users wrote, for instance, that they did not know that sports make you immune to the coronavirus, and posted videos that showed the president at less than his athletic best.

Back in March, Bolsonaro said that if he was able to survive being stabbed, then a "little flu" was unlikely to kill him, in reference to an assassination attempt during the 2018 campaign that left him critically injured.

Brazil's president appears unlikely to express much concern, despite the fact that he is infected with coronavirus. He said that he has been taking hydroxychloroquine, a drug he praised as a "miracle cure" for COVID-19, as a precaution. The use of the malaria drug to fight coronavirus is controversial. The WHO stopped tests involving it in mid-June because it showed no effect on the course of the disease in patients.