Tens of thousands of Brazilians joined the international protests against racism and police violence following George Floyd's killing by a white officer in the US. Anti-black racism has deep roots in Brazilian society. 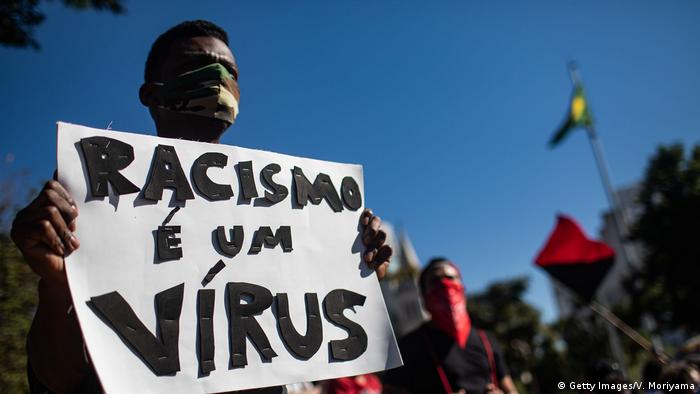 In May, 12-year-old Joao Pedro became the latest public face of police violence in Brazil. He was playing in his uncle's house when he was suddenly riddled with bullets: 72 rounds from police guns.

Although Brazil's Supreme Federal Court ordered a halt to raids in favelas during the coronavirus pandemic, police operations in the country's poorest neighborhoods have continued unabated. So it is no surprise that Brazilians have added their voices to the demonstrations taking place across the United States and worldwide following the killing of George Floyd by a white police officer. Brazil, the largest country in South America, has a long history of police violence.

"The biggest lie in the history of the world is that slavery ended," said Monica Cunha, whose son Rafael was killed by police in 2006. "The pandemic is showing us."

Cunha took part in one of Brazil's mass anti-racism demonstrations over the weekend. "Enough," the placard she carried through the center of Rio de Janeiro read. "Black mothers don't want to cry anymore."

Some of Brazil's most violent policing takes place under the shadow of Rio's Sugarloaf Mountain. In 2018, a quarter of police-related deaths nationwide were registered in the state of Rio de Janeiro. The death toll in the first six months of 2019 alone was 1,075 — 80% of the victims were black. And the death toll for April 2020 was up 43% over 2019.

According to statistics compiled by Violence Monitor, a collaboration between journalists and researchers that tracks homicides in Brazil, 5,804 people were killed by police in 2019 — up from 5,716 in 2018. By comparison, the Washington Post newspaper put the number of police-related deaths in the US at 1,039 for 2019. Statistically, the state of Rio, with an average of 10.5 deaths per 100,000 residents, is second only to the Amazon state of Amapa, which averages 15.1 per 100,000, in a nationwide ranking of police-related deaths.

The Military Police (PM) are the most feared law enforcement agents in Brazil. "Their roots stretch back to colonial times," explains historian Luiz Antonio Simas. The force was founded in 1809, as a royal guard protecting Joao VI of Portugal, who had fled to the colonies to escape Napoleon.

"The elites at the time were terribly plagued by what was known as Hatianism," Simas said. The 1791-1804 revolution in Haiti — in which formerly enslaved people expelled French plantation owners, abolished slavery and declared independence — had scared Brazil's land-owning class. "Hatianism persists as a historic fear," says Simas. "The idea of suppressing blacks while protecting the property of a small group of elites is part of the PM origin myth." The logo of the PMERJ, Rio's PM force, still features a crown above crossed colonial pistols flanked by sugar cane.

Racism is not only common in Brazil's police: It is deeply rooted in society. After slavery was formally abolished in 1888, the country did not impose official policies of segregation, as US states did, but the guiding principle became "racial whitening."

Read more: White privilege and the responsibility to enact change

"They were spreading the idea of a nation in which blacks were unwanted and expendable," said Ynae Lopes dos Santos, a historian at the Fluminense Federal University in Rio. The "whitening" of the race would occur through the offspring of white men who were encouraged to wed black or indigenous women. Dos Santos said the myth that Brazilian democracy was founded on the principle of racial harmony ignored the violence committed against women of color.

No land for black men

Though women of color had roles to play as wives or servants, dos Santos said, black men were left out: "19th-century racial ideologies claimed they were genetically predestined to become criminals." She said that prejudice persisted in contemporary police violence. 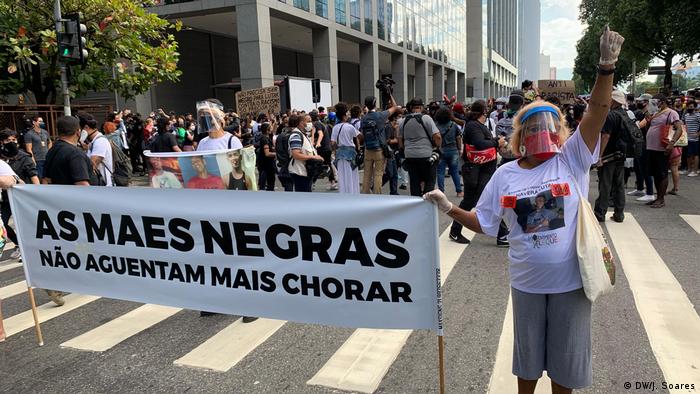 Police forces were expanded into a sprawling apparatus of state repression against left-wing dissidents during Brazil's 1964-1985 military dictatorship. And police found a new category of internal enemy when Brazil joined the international "war on drugs" declared by US President Richard Nixon in the early 1970s.

"The bloodbaths of the 1990s are our democracy's calling card," the historian Lucas Pedretti said. "Marginalized black men have never gotten out of the crosshairs. Deep-seated state terrorism has indelibly marked our democracy."

In 1993, the news of four massacres in Rio shocked the nation. In them, PM officers were said to have killed 53 people — including homeless children. Investigations into many of the deaths remained inconclusive.

Colonel Ibis Pereira, who was commander of Rio's PM at the time, acknowledges the structural racism: "We have a police force that operates like an independent death squad, not a crime investigation unit — at least not in poor areas, where the constitution still hasn't arrived." Pereira said that was evidence of the racism, "because mostly blacks live those places."