Demonstrators get creative during coronavirus pandemic | Germany | News and in-depth reporting from Berlin and beyond | DW | 06.06.2020 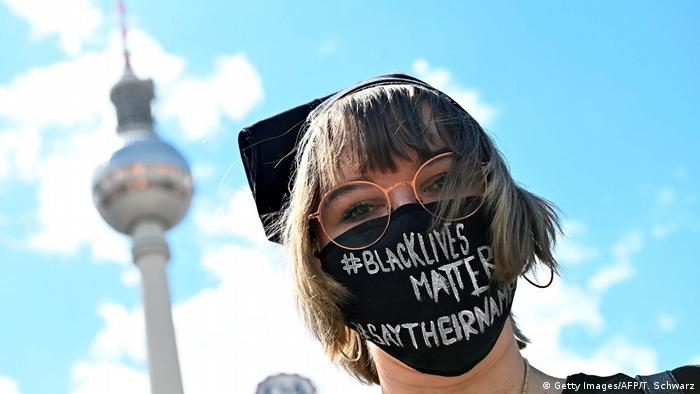 "I can't breathe" – the last words of George Floyd, the African American who died in Minneapolis, the victim of violence by a white policeman. The phrase became a slogan of the anti-racism movement, appearing on placards held aloft by demonstrators in the United States and all over the world – including Europe, where protests happened on Saturday.

But the demonstrations come at a time when there are supposed to be limits on physical proximity, because the new coronavirus is still rife. In some countries, the numbers are stabilizing, but in others, such as Peru, Brazil, or the United States, there are still thousands of new infections every day. As a result, many demonstrators feel guilty and torn: They want to protest, but they also see the need to take precautions.

A public expression of anger and impotence

Rahel Tekle is one of them. The 25-year-old, who lives in Bonn, wants to take part in an anti-racism demonstration this weekend – despite the risk of infection. "I hesitated for ages, because I actually think it's pretty stupid to be demonstrating during a pandemic," says Tekle. "But there's now such a low number of cases that the risk feels quite small. So I'm going to demonstrate, while maintaining distance." 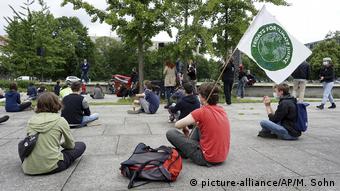 Fridays For Future practised social distancing during their protest

Demonstrating her protest in this way is important to her. She has experienced racism herself: When she was called the N-word at elementary school; when she wasn't invited to a birthday party because of the color of her skin; or when her secondary school German teacher graded her work "5: unsatisfactory" – on principle, because, the teacher said, it wasn't possible that she could know German.

In her view, George Floyd's death is just one of many incidents that show racism is happening every day. "I wasn't surprised by his death," she said. "My feeling was more anger and impotence, because I thought: It's not getting any better."

But the ongoing debate about racism in society and the media gives Tekle hope. "I have the impression that this is the moment when something is happening, and society can change," she says. She wants to encourage that, and demonstrate for it – and to do so of her own free will.

Online, some anti-racism activists are piling on the pressure. Anyone who doesn't get out on the street and protest against racism is part of the problem – that's one accusation being made on digital platforms. Tekle disagrees. She says that it's just as important to talk about racism with family and friends – not only now. "And social media provide alternatives to protesting on the street," she said. "Sharing articles, informing yourself, showing solidarity – it doesn't only have to be at a demonstration. The main thing is to do it."

Weighing up responsibility and risk

Either way, the past few months have been a difficult time for political protest. The"Fridays for Future" activists have also experienced it – but because climate change doesn't stop for a pandemic, the campaigners have been thinking up alternatives to their public demonstrations. The long-planned climate strike on April 24 was moved online at the last minute.

Since Germany's Constitutional Court overturned the general ban on demonstrations in mid-April, on condition that participants maintain a minimum distance of 1.5 meters from each other, Fridays for Future have been out on the street again. Last Tuesday, activists sat on the ground in the shadow of Cologne Cathedral to reinforce their demands over the German government's economic recovery package. They used chalk to draw an enormous grid on the square, and a maximum of two protesters, with facemasks covering their mouths, were allowed to sit in each box. "Our protests conform with coronavirus restrictions," promises 23-year-old Leonie Bremer, a Fridays for Future activist. "It's important to us that it's possible to demonstrate, and at the same time protect the group of people at risk."

It's also important to her personally, because some of her relatives are in that high-risk group, which is why her parents are not happy that she's demonstrating while the virus is in circulation. "But it's about our future and our health, too," says Bremer. "Besides, I get nervous when I feel I can't do anything." 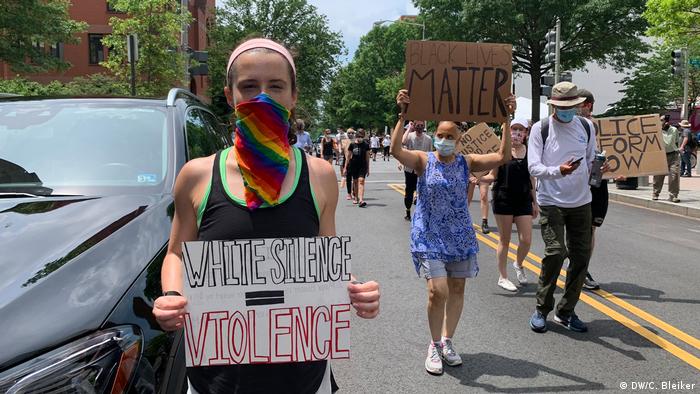 Digital demos don't get much attention

Bremer believes their protest had an effect, but she's noticed that digital climate strikes have limitations: "We reach politicians better with TV pictures and newspaper reports about our large-scale strikes than with actions on digital media."

Daniel Mullis confirms her impression. His work at the Peace Research Institute Frankfurt focuses on crisis protests. "Protest in the digital realm was not that successful," he said. Some online actions hardly got any attention at all, such as the Housing Action Day at the end of March, a protest against high rents. The internet strike for the climate organized by Fridays for Future was an exception, admitted Mullis.

He says that most social movements did observe coronavirus restrictions – except the so-called Hygiene Demonstrators, who were deliberately trying to circumvent them. "Whether it was Fridays for Future or the Seebrücken protests [for the emergency rescue of refugees at sea – Ed.], they all tried to implement creative forms of protest, using face masks and social distancing," the researcher explains. "That was a responsible way to behave during the pandemic."

18-year-old Anthea Herre from Berlin also wants to act responsibly this weekend. She'll be taking part in a "silent demo." In many German cities, demonstrators gathered in silence to protest police violence and racism. "Black people are systematically oppressed in our society, too," says Herre. "It's not just an American problem." White people are given preferential treatment, she says; they're more likely to get a job, and are treated differently by the German police than African Germans or others with African roots – she's heard about this from her own circle of friends. "We should admit to ourselves that we have these privileges," she says.

This is why Herre is protesting despite the coronavirus pandemic, and even though that worries her. "I've got masks and gloves," she says. "Maybe I'll wear sunglasses as well." She accepts that there will still be a risk of infection, but: "This issue is so important to me."

A US federal judge in Georgia said she did not agree with the terms of the plea deal for the McMichaels, who killed Ahmaud Arbery in 2020 while he was jogging. Arbery's parents also denounced the plea agreement.

Lawyers gave their final arguments as jurors prepared to deliberate on whether Derek Chauvin was guilty of killing George Floyd, a 46-year-old Black man who was arrested in May 2020 over the use of a fake banknote.