COVID: EU regulator backs BioNTech-Pfizer vaccine booster for 18 and over

While the European Medicines Agency approved a third dose for people over 18-years-old, the agency said it was up to member states to decide whether to use them. 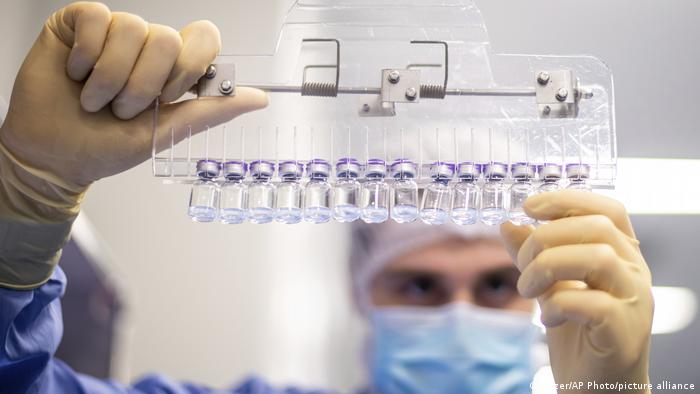 The European Medicines Agency (EMA)approved issuing third booster shots of the BioNTech-Pfizer vaccine to people over the age of 18 on Monday.

The approval follows in the footsteps of other regulators, but comes amid urging from the World Health Organization (WHO) to ensure first doses reach developing countries before third doses are rolled out in wealthier parts of the world.

What did the agency say?

For people 18 and older with normally functioning immune systems, EMA said a BioNTech-Pfizer booster shot could be considered — provided that six months had passed since the second dose of their original vaccination.

The regulatory agency noted, however, that "decisions for boosters will be taken by public health bodies at national level."

Separately, the EMA gave the green light for people with "severely compromised immune systems" to receive a third shot of either the BioNTech-Pfizer or the Moderna vaccine at least 28 days after their original dose. The two types of vaccines use mRNA technology.

Regulators reached the decision after evaluating several studies on the safety and efficacy of booster doses. They said they would continue to monitor for potential, rare side effects.

Where do EU countries stand on booster doses?

The EMA's recommendations will now head to the bloc's executive arm, the European Commission, for approval before being passed on to the bloc's 27 health ministries.

Several EU member-states have already launched their own booster campaigns, including Germany, France, Italy and Ireland. But the rules about who is currently eligible vary from country to country.

The United States, the United Kingdom and Israel have also granted regulatory approval to BioNTech-Pfizer booster doses, although Israel is the only country to have rolled out the option to its entire population.

The EU's regulatory approval also comes amid tensions between richer and poorer nations over access to coronavirus vaccines and warnings from the WHO against hoarding supplies.

The UN's health body has repeatedly urged the US, Europe and others to hold off on rolling out booster campaigns and instead help ensure developing countries have enough doses to vaccinate their populations.

BioNTech-Pfizer sought to calm concerns and criticism from the WHO and leaders in several developing nations. In a statement, the two companies said they "do not expect the introduction of booster doses in the United States and the EU, if authorized, to impact the existing supply agreements in place."

The hospitality sector in Europe is breathing a sigh of relief. Many countries have eased restrictions on everyday life, making tourism possible again. DW Travel offers a brief recap of what rules apply in the EU.