COVID: Why are infections rising in Israel?

With almost 60% of the country fully vaccinated, Israel has seen a life after COVID-19. But now infections are on the rise. What's going on? Will a third jab help? 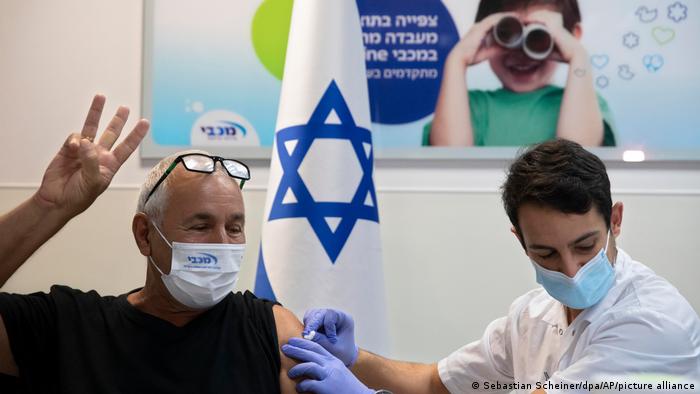 Will we need a new shot of a vaccine with every new wave of COVID-19?

Back in March, Israel thought it had seen the back of COVID-19. More than half of the country's 9.3 million population had received two jabs of a SARS-CoV-2 (coronavirus) vaccine. The number is now close to 60% of the country and rising.

Germany, by contrast, was trailing massively at the time — a mere 3.7% of its 83 million residents were double-jabbed by mid-March. We're now in the high 50s for first jabs, less for second jabs.

So, Israel was on a high. Anecdotal reports suggested face masks had all but completely disappeared from public spaces and life had returned to "normal."

Just four months later and things have changed again, with some countries warning Israel is a high-risk destination for travelers.

COVID cases have risen steadily since mid-July in Israel. The government says that's mainly among unvaccinated children, but there are some breakthrough infections as well.

Israel's health ministry has cited studies that suggest the level of protection from vaccines drops over time, especially against the delta variant.

So, Israel wants people to get a third dose of a vaccine to boost those antibodies and increase their chances of fighting the disease. It has been pushing that campaign at an incredible speed, with tens of thousands of people getting booster shots every day since the start of August. 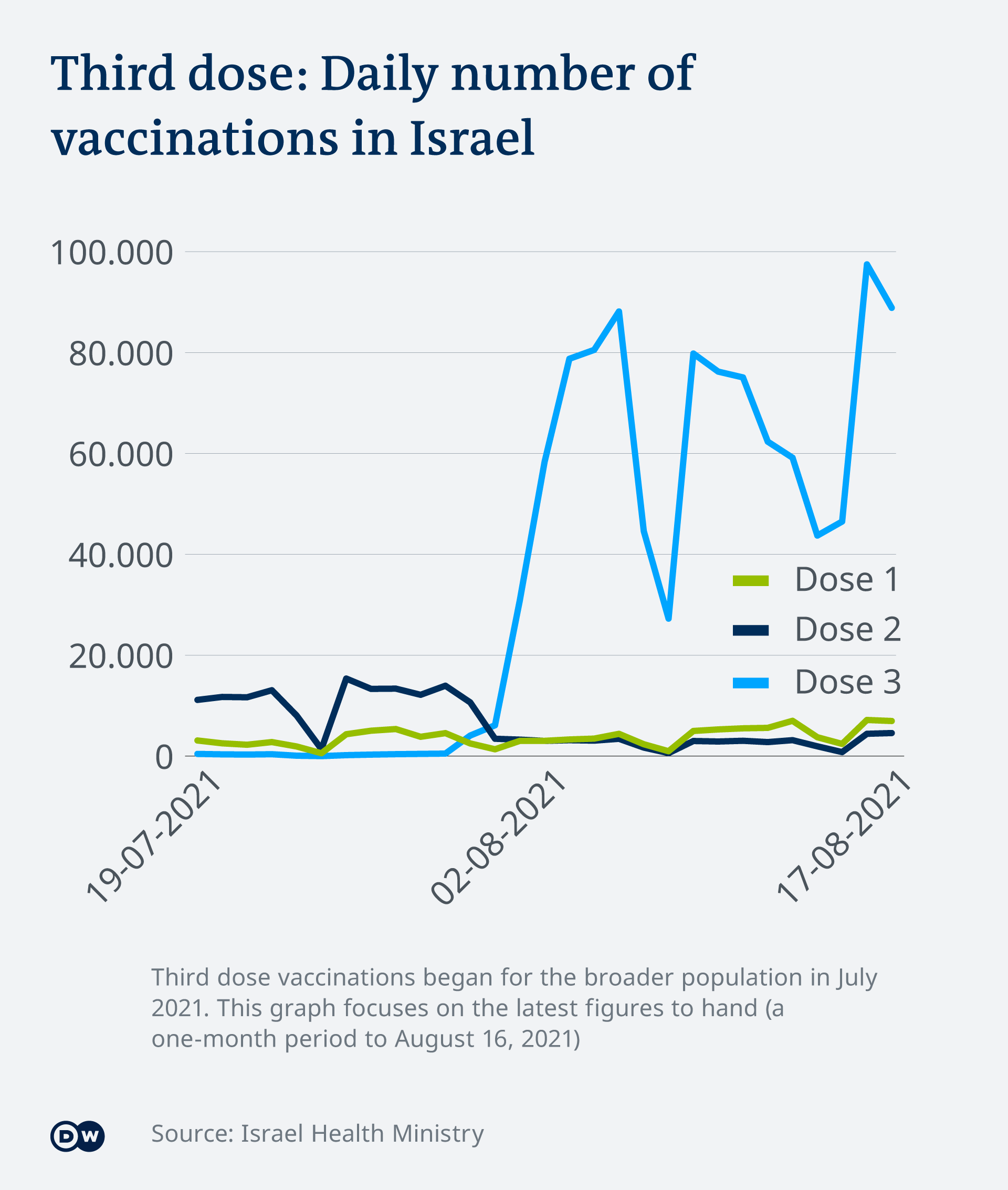 Between May, June and July, the country was averaging zero deaths per day. That doesn't mean there were no deaths at all, but they didn't occur often enough for an average to be established.

By August 15, Israel was averaging two new confirmed COVID deaths per day. It has jumped up to nearly five in just one day.

Although it is tempting to compare these figures to those of other countries, and there are higher and lower rates of infection and death, let's stay focused on Israel. 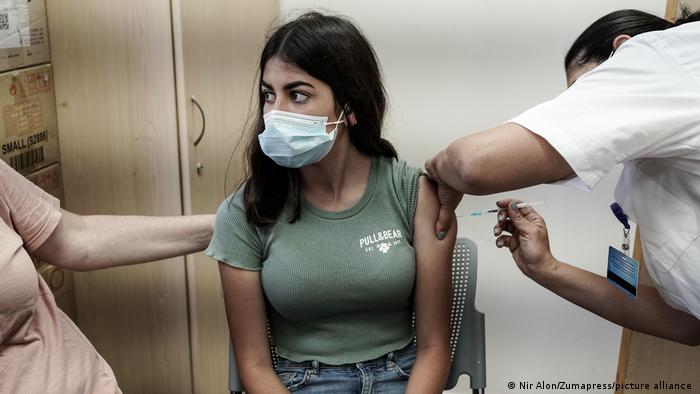 Why are infections rising in Israel?

It probably has something to do with the delta variant of the virus.

There's been some reluctance to declare delta as the dominant variant in Israel. Some say it is and some say it isn't.

But in a briefing on August 14, Israeli Prime Minister Naftali Bennett did say that "the outbreak of the delta strain around the world and in Israel" was "engulfing the world."

That suggests the delta variant is behind many of the infections in Israel.

In addition, the Ministry of Health of Israel has reported "a marked decline in the effectiveness of the vaccine in preventing infection (64%) and symptomatic illness (64%) [since June 6]. This decline has been observed simultaneously with the spread of the delta variant in Israel."

A Reuters report at the time suggested that the end of social distancing restrictions in Israel had also played its part.

Israel has approved two COVID-19 vaccines: The Pfizer/BioNTech and the Moderna. Both are novel mRNA vaccines. Both reported an initial effectiveness of about 95%. 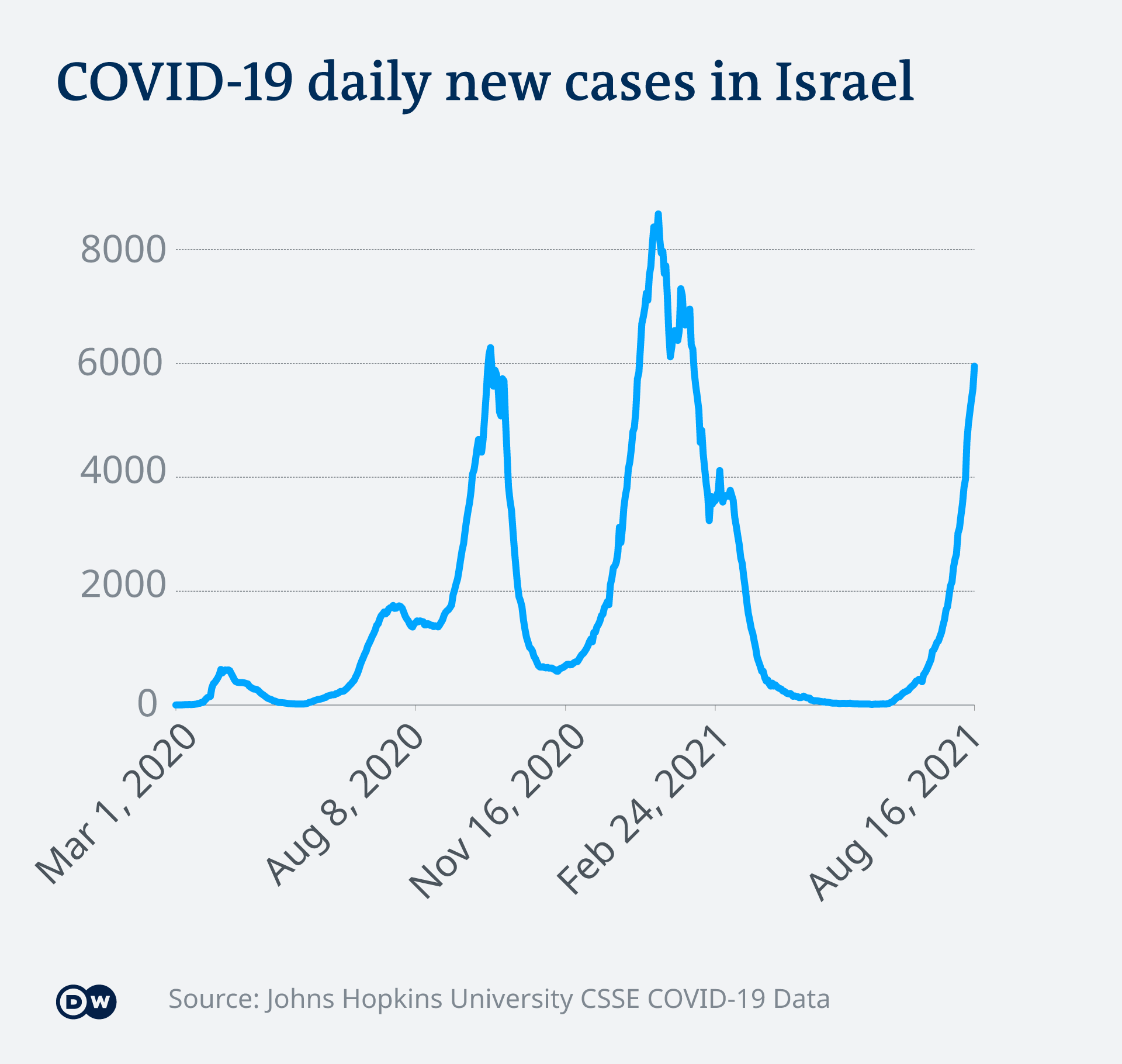 Is it all breakthrough cases?

No vaccine is perfect — none offer 100% protection every time and the number of antibodies a person produces varies. So scientists do expect to see a certain number of so-called "breakthrough infections." That's when a fully vaccinated person still gets sick.

It's worth mentioning that there is some debate around the definition of "fully."

Some say you're fully vaccinated after two jabs of a Pfizer/BioNTech or AstraZeneca vaccine and countries like the UK insist that both jabs must be from the same manufacturer for you to be "fully vaccinated."

Others, meanwhile, such as Germany and elsewhere in Europe, are going with mix-and-match vaccinations — so your first jab is an AstraZeneca, for instance, and your second is a Pfizer/BioNTech.

The overwhelming opinion is that combination vaccines, especially including the Pfizer/BioNTech, are better against the delta variant.

There is also a Johnson & Johnson vaccine, which only requires a single jab to be deliver full vaccination.

Then there are countries like Israel, who are advising citizens to get a third jab as soon as possible.

Some experts raise ethical and scientific issues around the third jab theory — for a start, there are countries who can't even get their hands on enough stock for one round of vaccinations. And second, they say the science doesn't back it up — that from what we know so far, a person is not necessarily better protected with a third shot.

But this could change over time. In a year or two, scientists may find that people need a fourth jab. Or perhaps the emergence of new variants will mean people will never be fully vaccinated and the world will just have to live with it.

In any case, as it stands, data suggests that even if there are breakthrough cases among fully vaccinated Israelis, their infections are less severe than among those who have had no jabs at all.

Israel's not taking any chances. It's going with more doses.

The health ministry says studies conducted by vaccine manufacturers and other agencies across the world suggest that "the third dose causes an increase in the level of antibodies in the blood, boosts their quality (improved capability to neutralize the virus) and they remain longer in the body. The result is an increased antibody capability to protect the body against the virus."

And it's not ruling out further doses in the future.

It also recommends vaccinating young people between the ages of 12-15.

Sources: COVID-19 Data Repository by the Center for Systems Science and Engineering (CSSE) at Johns Hopkins University via ourworldindata.org and the Israel Ministry of Health.

How many antibodies does it take to be immune to the coronavirus?

Antibodies are important for a vaccination to work, but scientists don't yet know what level they must reach. The new delta variant poses another problem.