Coronavirus: Israel to offer third COVID shot to over 60s

Such a large-scale booster campaign is a world-first. Health officials are worried that the vaccine's efficacy reduces over time, but some critics think Israel should wait. 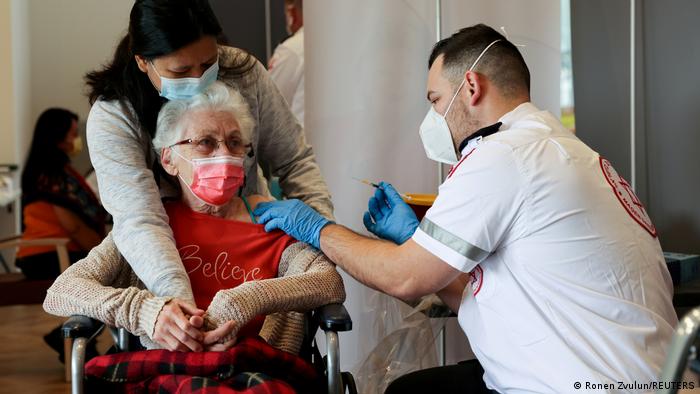 Such a large-scale booster campaign, which was approved by Israeli experts late on Wednesday, is a world first.

The move was announced amid growing case numbers, driven by the highly contagious Delta variant.

Who can get Israel's COVID booster shot?

From Sunday onwards, the vaccine will be offered to all over 60s who were vaccinated more than five months ago.

Israel's president, Isaac Herzog, will be the first to get the booster just a few days earlier, on Friday.

Bennett said he plans to call his mother to encourage her to get a booster shot.

Why is Israel rolling out a third COVID jab?

"Like the flu vaccine that needs to be renewed from time to time, it is the same in this case," Bennett said.

His comments mirror those of Israel's Health Ministry. It has twice reported a drop in the vaccine's efficacy against infection.

Last week, the health ministry estimated the BioNTech/Pfizer vaccine was only 41% effective at halting symptomatic infections over the past month. Protection against severe disease remained strong at 91%.

Pfizer said on Wednesday it believes people need the additional dose to keep protection against the coronavirus high.

But there have been few large-scale trials into the efficacy of a third dose. The first large study of the strategy is beginning in thousands of patients in Norway.

Previously, boosters were used in some countries with the Chinese and Russian vaccines.

Some experts believe that Israel should wait a little longer to receive more information about the safety and effectiveness of a third shot.

Early this year, Israel carried out one of the world's most aggressive and successful vaccination campaigns.

Over 57% of the country's 9.3 million citizens have received two doses of the BioNTech/Pfizer vaccine. Over 80% of the population over 40 is vaccinated.

But infections are on the rise again. Daily new infections have spiked to more than 2,000, up from a handful of cases per day a few months ago.