Various studies show people have better immune responses and produce more antibodies with a combination of the AstraZeneca, BioNTech or Moderna vaccines. 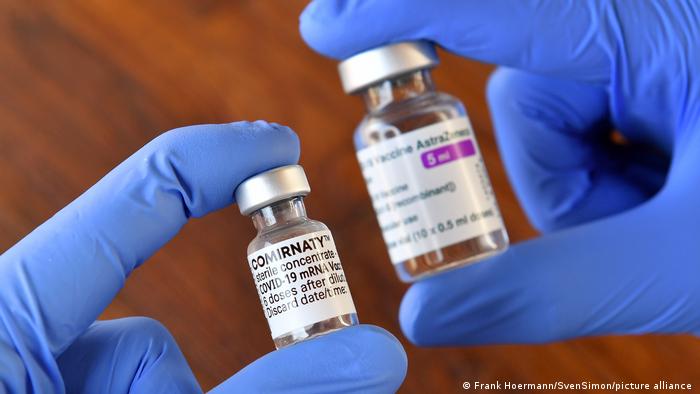 Does it make more sense to switch to BioNTech after the first AstraZeneca shot?

As of Tuesday (7.12.2021), the European Medicines Agency and the European Centre for Disease Prevention and Control expressly recommend the use of mix-and-match vaccinations, consisting of both vector-based and mRNA vaccines to fight COVID-19.

This comes as Matthew Snape, a virologist at the University of Oxford in England, says a large study into mix-and-match vaccinations,  with patients, was showing positive results. Snape is the lead researcher of the study and was speaking to Reuters news agency.

How did mix-and-match vaccines come about?

Following its approval by the European Medicines Agency in January, the COVID-19AstraZeneca vaccine was administered to all adults in Germany. After discovering that especially younger women who received the shot faced an increased risk of dangerous blood clots in the brain, Germany's Standing Committee on Vaccination (Stiko) in April recommended limiting the use of AstraZeneca to people aged over 60.

That meant quite a few people who had received their first dose of AstraZeneca had to then get BioNTech-Pfizer or Moderna for their second shot. Today, all adults in Germany, no matter their age, can be vaccinated with AstraZeneca again, if the patient and doctor have a conversation about the risks prior to the jab.

Back in June, the researchers at the University of Oxford  had publicized initial indications of success. They said that patients, who had first received an Oxford-AstraZeneca jab and then a BioNTech-Pfizer jab four weeks later, were producing more antibodies than those patients who had got two shots of AstraZeneca.

As part of their Com-COV trial, the Oxford researchers administered various vaccine combinations to 830 volunteers over the age of 50. A subsequent Com-COV2 study included 1,070 volunteers. Their results showed the highest number of antibodies was developed by people who had received two BioNTech jabs, followed by those who had gotten a shot of AstraZeneca first and BioNTech second. The reverse order still yielded more antibodies on average than two shots of AstraZeneca.

Lead researcher Matthew Snape, an associate professor of pediatrics and vaccinology, then told the BBC that the Com-COV findings didn't undermine the use of two AstraZeneca jabs in the fight against COVID.

"We already know that both standard schedules are very effective against severe disease and hospitalizations, including against the Delta variant," he said.

Researchers at Saarland University in western Germany have found that people whose first shot was AstraZeneca and whose second shot was BioNTech-Pfizer showed an immune response stronger than that in patients who had received two doses of the same vaccine, be it AstraZeneca or BioNTech.

There were more than 200 people that participated in the trial conducted at the University Hospital in Homburg, Saarland, over the last few months. Some of them received two AstraZeneca shots, some received two BioNTech-Pfizer shots and a third group received an AstraZeneca shot followed by one from BioNTech.

The researchers compared the strength of participants' immune responses two weeks after the second shot. "We didn't just look at the number of antibodies against the coronavirus [the participants] developed, but also how effective the so-called neutralizing antibodies were," Martina Sester, a professor in transplantation and infection immunology at Saarland University, explained.

"That tells us how good the antibodies are at preventing the virus from entering our cells."

In terms of antibody development, the double-BioNTech — as well as the combined AstraZeneca-BioNTech vaccination — was significantly more effective than the double-AstraZeneca alternative.

Participants who had one of the first two combinations of shots produced around 10 times more antibodies than those with two AstraZeneca jabs. And looking at the neutralizing antibodies, results with the mix-and-match vaccine approach were "even slightly better" than those achieved with two BioNTech shots, Sester said.

For vaccines that require two jabs, health officials have typically recommended the second shot be the same as the first.

The Spanish CombivacS trial, conducted with 663 participants at the Carlos III Health Institute in Madrid, came to a similar conclusion. The study's preliminary results were reported in the scientific journal Nature. Like the results from Saarland University, they are not yet final ― the publication in Nature is an overview of what the researchers in Spain have found so far, and not a full, peer-reviewed article.

Two-thirds of participants received a shot of the BioNTech-Pfizer vaccine after their initial AstraZeneca jab. The last third had not received a second shot at the time the initial results were shared. Magdalena Campins, an investigator on the CombivacS study at the Vall d’Hebron University Hospital in Barcelona, reported that those who had received the full mix-and-match vaccine combination began producing much higher levels of antibodies after their second shot, and these antibodies were able to recognize and inactivate SARS-CoV-2 in laboratory tests.

"It appears that the [BioNTech-]Pfizer vaccine boosted antibody responses remarkably in one-dose AstraZeneca vaccines," said Zhou Xing, an immunologist at McMaster University in Hamilton, Canada, who was not involved in the study, in the Nature article. Xing added that the boost appeared to be even more pronounced than the one in people who had received their second dose of the AstraZeneca vaccine.

However, aside from the fact that its results aren't yet finalized and peer-reviewed, one problem with this study out of Spain is that it doesn't include a control group of people who received two shots of the same vaccine — so no direct comparison between the two groups was possible. 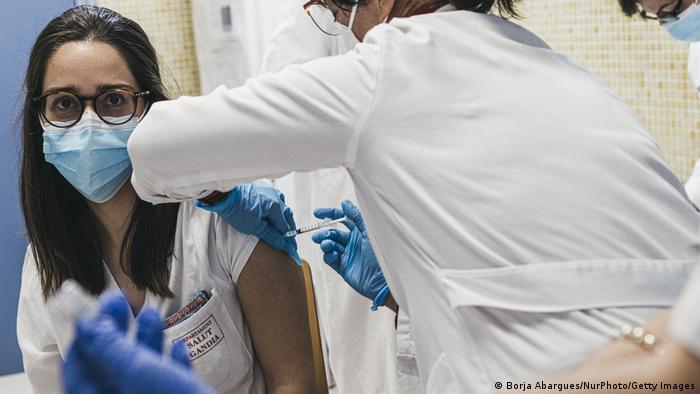 So far, a little less than one quarter of Spain's population is fully vaccinated against COVID.

In Germany, someone is considered fully vaccinated if they have received two shots of the same vaccine, as well as if they have had a mix-and-match vaccination. The German government follows the guidelines of the Paul Ehrlich Institute (PEI).

This article was last updated on December 7, 2021, to reflect the recommendation of mix-and-match vaccinations by EMA and the ECDC.

FAQ: COVID-19 vaccinations: What you need to know

What are the differences between the vaccines? Which one is the right one for me? How quickly can people get vaccinated? Are there potential side effects? Here are some answers to the most important questions.

Berlin intends to roll out a digital immunity certificate by the end of June, making it easier to prove that a person has been fully vaccinated against the coronavirus. But critics warn the timeframe is too ambitious.