Employees in Italy could face suspension without pay for failing to show a "green pass." Meanwhile, Australia moves toward reopening its borders for the first time since March 2020. Follow DW for the latest. 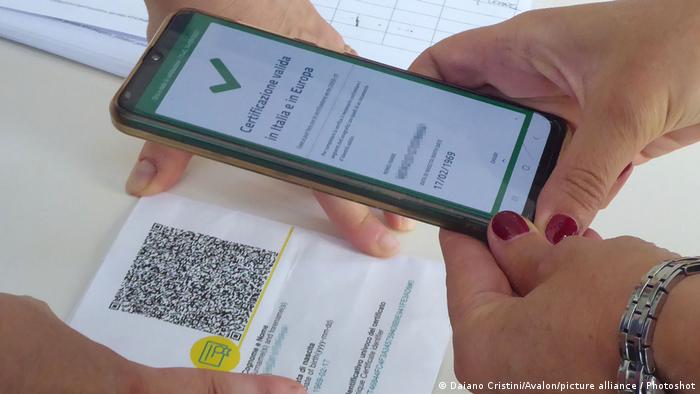 The green pass is currently in use for entry to indoor-dining in restaurants, cinemas, and sports stadiums

Italy became the first country in Europe to require all workers, in both public and private sector, to show proof of vaccination, a negative test or a recent recovery from COVID-19.

The law, which penalizes anyone who fails to present a valid health certificate, or green pass, will come into effect on October 15.

If employees remain absent for being unable to secure a pass, they could be suspended without pay, but not sacked, ministers said.

"We're extending the green pass obligation to the entire world of work, both public and private," Health Minister Roberto Speranza said at a press conference. "And we're doing it for two basic reasons: to make these places safer and make our vaccination campaign stronger."

"Nothing like this has been done in Europe ... we are putting ourselves in the forefront internationally," said Public Administration Minister Renato Brunetta.

Currently, the green pass is used for entry for indoor-dining at restaurants, cinemas, and sports stadiums.

It is also used for intercity trains and buses or domestic flights, and for teachers.

Here's the latest coronavirus news from around the world:

The Dutch parliament narrowly defeated a motion calling on the government to change its plans of introducing a "corona pass."

Prime Minister Mark Rutte said the pass — proof of a COVID-19 vaccination or a recent negative coronavirus test — was needed to avoid another wave of infections.

"We are still in a dangerous situation. Not doing this would bring great risks", he said during a parliamentary debate.

The Dutch corona pass will be required from entry into bars, restaurants, museums, theatres, and other cultural events from September 25.

Austrian authorities will face the first of 15 civil trials in the ski town of Ischgl, where plaintiffs say the government's mishandling the coronavirus outbreak at the Alpine ski resort resulted in unnecessary infections and deaths.

The outbreak in Ischgl, a popular resort in western Austria, is considered one of Europe's earliest "superspreader'' events of the COVID-19 pandemic and widely credited for spreading the virus across the region.

More than 6,000 people from 45 countries were reported to have contracted the coronavirus in Ischgl and other Tyrolean resorts in March of 2020.

Slovenia on Friday said it would immediately begin compulsory vaccinations for all public employees. PCR tests will no longer grant entry for those wanting to enter government-funded workplaces, such as public hospitals.

Australia looks to reopen its borders, which have been shut since March 2020.

"This is the next step in our plan to safely reopen, and to stay safely open," he said, adding that the trial could set the standard for the way "we live with COVID-19."

New Zealand extended its pause on the travel bubble with Australia for at least another eight weeks.

The so-called Trans-Tasman bubble began in April and allowed Australians and New Zealanders to travel between the two countries without the need to quarantine.

It was paused in July as Australia struggled to contain new outbreaks fueled by the highly contagious Delta variant.

COVID vaccine based on a tobacco plant

Cambodia announced a vaccination campaign for children ages 6 to 11, with the goal of allowing students to safely return to schools that have been closed for months due to COVID-19.

Prime Minister Hun Sen unveiled the campaign with his grandchildren and young family members of other senior officials being given their shots.

Nearly 72% of Cambodia's almost 17 million people have received at least one COVID-19 shot since vaccinations began in February, mostly with China's Sinovac and Sinopharm vaccines.

Indonesia may allow foreign tourists to start returning to the popular resort island of Bali and other parts of the country by October, senior minister Luhut Pandjaitan said.

The Southeast Asian nation has seen a sharp decline in cases, after it was hit by a devastating second wave, driven by the Delta variant.

Brazil's President Jair Bolsonaro will attend the UN General Assembly in New York, despite being unvaccinated.

"Next week I will be at the UN General Assembly (UNGA), where I will give an opening speech" on Tuesday, Bolsonaro said Thursday.

His announcement came in apparent defiance of New York City authorities who recently announced proof-of-vaccination requirements for all attending leaders and diplomats.

Bolsonaro recovered from COVID-19 last year. He has said he would be the "last Brazilian" to get vaccinated.