Protesters had violently clashed with police during the rallies against a government rule requiring COVID-19 vaccines or negative tests to access workplaces. 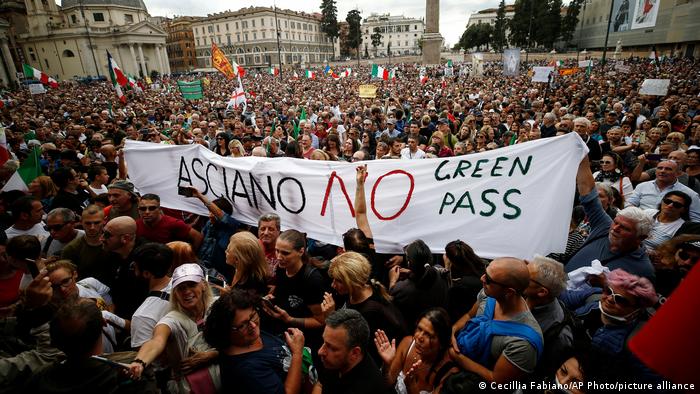 Two leaders of the extreme far-right party Forza Nuova, Giuliano Castellino and Roberto Fiore, were present during Saturday's violent protests. They were among the 12 arrested, police said.

Thousands of people marched down the streets of Rome on Saturday to protest against Italy's new COVID "green pass" vaccination requirement for employees.

The protests grew increasingly violent during the day, with police swinging batons at demonstrators or using water cannons and pepper sprays to push back the crowd.

More than 10,000 people took to the streets of the Italian capital, according to local media outlets. Several groups of people tried breaking barricades and police lines at different places. 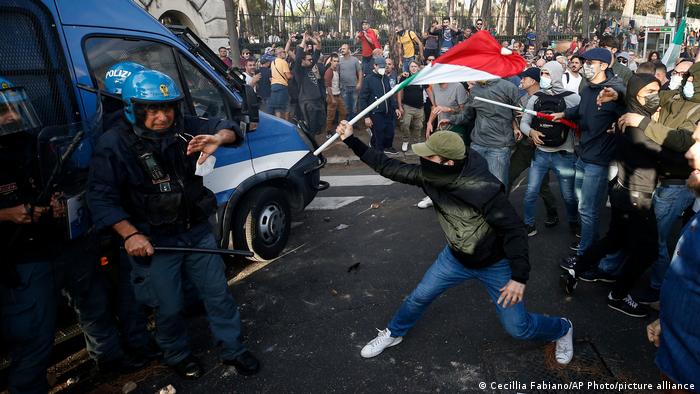 One group of protesters attempted to push their way past police lines to reach Prime Minister Mario Draghi's office.

A separate group stormed the headquarters of the Italian General Confederation of Labor (CGIL), one of Italy's oldest and biggest trade unions.

Some four people were arrested during the early hours of the day, according to the Italian ANSA news agency.

Protesters were also seen throwing chairs and chanting slogans like "freedom, freedom." They believe the measures are coercing people into get vaccinated.

Their cause has been backed by far-right, neo-fascist groups, whom local politicians accused of orchestrating Saturday's violence. 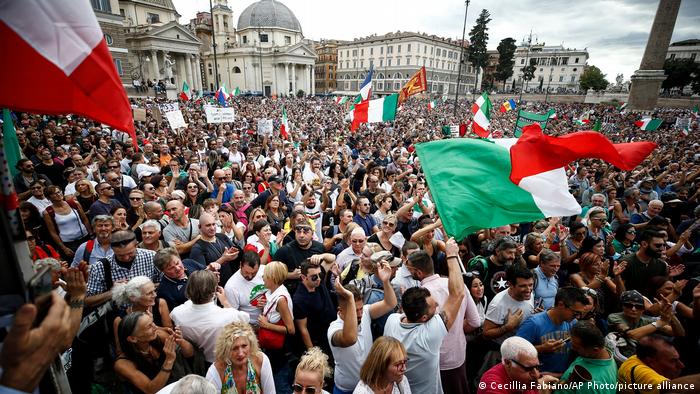 Thousands of people joined protests through the day

The prime minister condemned the violence, saying trade unions ensured workers' rights and that people would be punished if they attempted to intimidate trade union members.

"The right to demonstrate to support one's ideas can never degenerate into acts of aggression and intimidation," Draghi said in a statement issued by his office.

Maurizio Landini, the CGIL secretary-general,  said the attack was an "act of fascist thuggery, an attack on democracy and on the world of work."

"No one should think that they can  return our country to its fascist past," Landini added.

What is Italy's 'green pass'?

The 'green pass' is a certification that will be required by every employee, both in private companies or in the public sector, from October 15.

People must show they have received at one dose of vaccination against COVID-19, have recovered from the disease or tested negative.

Italians can visit any public place if they have the certificate. The country also allows the reopening of cinemas, theaters, and discos to full capacity starting Monday.

What is the COVID situation in Italy?

The Italian Health Ministry reported 46 coronavirus-related deaths on Saturday, up from 30 during the prior period. The daily tally of new COVID cases fell flighty to 2,748 from 3,023.

Italy has registered 131,274 deaths linked to COVID since the outbreak emerged in February last year, the second-highest toll in Europe, after the UK, and the ninth-highest in the world. The country has reported 4.7 million cases to date.