Germany has seen the highest number of new daily coronavirus cases since April as Berlin introduces an effective curfew. Meanwhile, Brussels has closed cafes and bars. All the latest from DW here. 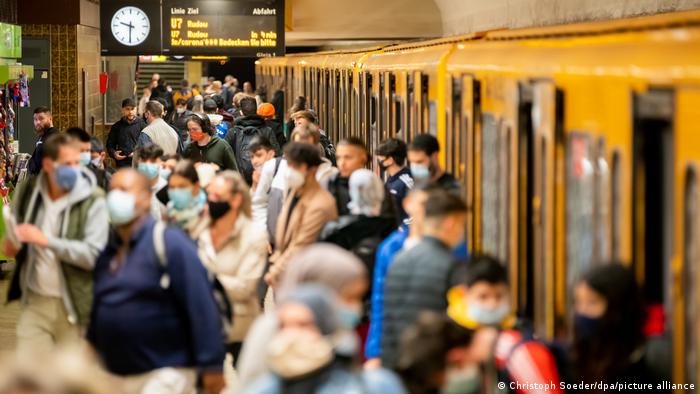 Germany set a new post-peak record for new daily coronavirus cases on Wednesday, with 2,828 new cases. The number of people requiring treatment in intensive care and on ventilators also increased.

In late March and early April, Germany was counting more than 6,000 new cases per day before they decreased. However, numbers began to slowly rise again since July. Lockdown rules have been gradually lifted since May, but the capital of Berlin announced a partial curfew on Tuesday.

As a result of rising cases, German state officials have agreed to ban travelers from high-risk areas from staying in hotels unless they can show a negative test, however, four states including Thuringia, Bremen, Lower Saxony, Mecklenburg-Vorpommern and Berlin have cast doubts on the ban.

This would stop residents of Berlin from taking a domestic holiday during the upcoming school holidays unless they test negative.

"The Federal and State governments call on all citizens to avoid all non-essential travel into or out of regions where there have been 50 new infections per 100,000 inhabitants over the past seven days," ministers said in a joint statement.

Sri Lanka has banned all public gatherings as cases spiked in the Indian Ocean nation. More than 800 infections have been linked to a garment factory, and more than 1,000 people have been ordered to quarantine. The cluster of cases emerged on Monday, one day after the country reported its first community infection in two months.

South Korea reported 114 new cases, its first daily jump of over 100 cases in one week. Health officials have warned that infections will likely rise due to the increased travel during the Chuseok harvest holiday, which ended over the weekend. More than 90 of the new cases were in the capital, Seoul, which has seen a resurgence since Mid-August.

The International Monetary Fund (IMF) said it will take years for Mexico's economy to recover from the pandemic. The IMF said the country will see its economy shrink by 9% in 2020, a slight improvement from an earlier projection of a 10.5% fall. It forecast that the economy will grow by 3.5% in 2021 and about 2% thereafter. "Based on these projections, employment, income and poverty will take several years to return to pre-pandemic levels," read an IMF report.

US President Donald Trump, while still being treated for the virus, abruptly ended talks with Democrats on an economic aid package for Americans reeling from the pandemic instead saying he would present a plan after being reelected. Democratic presidential candidate Joe Biden voiced his criticism, tweeting, "The president turned his back on you."

American public broadcaster PBS revealed that medical supply chains failed in the country, which led to more deaths from the coronavirus. The investigation by the Associated Press and PBS program "Frontline" showed link after link between raw materials and overseas manufacturers fell apart. The investigation showed politicians and major companies ignored warnings about the country's overdependence on foreign manufacturing and a lack of adequate preparation at home.

The United Nations High Commissioner for Refugees, Italian-born Filippo Grandi, said he has been diagnosed with COVID-19 and will quarantine from home.

The Netherlands reported 5,000 new cases within 24 hours on Wednesday, while Denmark announced restrictions on public life would be continued until October 31 at least.

Spanish Health Minister Salvador Illa said there were some important differences between the first and second waves of infections in his country. He said the death rate during the first wave was about 12%. That rate had fallen to 1% in the second wave. Also, authorities believe that they could only detect about 10% of coronavirus cases during the first round. That number is now estimated to be between 70-80%. Nearly 4.8 million people in and around the capital Madrid are under restrictions of movement due to the second wave.

Brussels will close its bars and cafes for one month starting on Thursday in a bid to contain coronavirus numbers and infections and avoid putting pressure on hospitals in the region. Restaurants can stay open until 11 p.m., but people can only enter them in groups of up to four, as per new national rules.

US: Donald Trump halts coronavirus stimulus talks until after election

The US economy has been pummeled by the pandemic. The Federal Reserve was hoping for further relief, but the president's surprise announcement caused Wall Street stocks to drop.