The identification for Chinese citizens is said to be the world's first "coronavirus passport." Reports have emerged in Japan that suggest there will be no overseas fans at this summer's Olympics. DW has the latest. 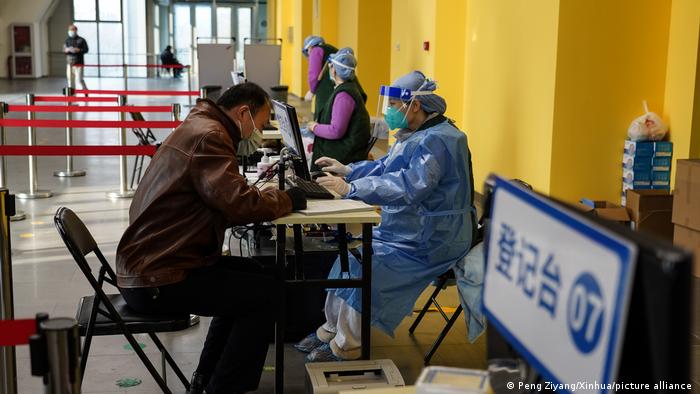 China has launched a digital health certificate program for travelers who have been vaccinated against COVID-19.

The "vaccine passport" will show a user's current vaccination status, as well as recent COVID test results, and is available with immediate effect via Chinese social media platform WeChat.

The certificate is being distributed in order "to promote world economic recovery and facilitate cross-border travel," a Foreign Ministry spokesman said on Tuesday.

The international health certificate is currently only available to Chinese citizens. The travel identification, which is also available in paper form, is thought to be the world's first "virus passport."

The United States and Britain are among countries currently considering issuing similar permits, while the European Union is also working on a vaccine "green pass."

For the first time in nearly 3 1/2 months, the United States has registered fewer than 1,000 COVID-19 deaths over a 24-hour period, according to data from Johns Hopkins University.

Monday's daily update showed 749 people had died from the coronavirus, well below the peak of 4,473 deaths recorded on January 12.

The US vaccination process, launched in December, is now in full swing with nearly 10% of the population having received either the two shots necessary for the BioNTech-Pfizer or Moderna vaccines, or the single dose in the case of the Johnson & Johnson version.

Meanwhile, US health authorities have announced that vaccinated people can meet in small groups indoors without wearing face masks or the need to practice physical distancing. However, they must continue to respect these precautionary measures in the presence of unvaccinated citizens and in public spaces.

The BioNTech-Pfizer vaccine is effective in neutralizing a new variant spreading rapidly in Brazil, according to a laboratory study published in the New England Journal of Medicine.

There is also growing belief among experts that the BioNTech-Pfizer vaccine will prove to be highly effective against the variant first identified in South Africa.

In Paraguay, thousands of people gathered around Congress in downtown Asuncion, marking the fourth day of protests amid calls to impeach President Mario Abdo Benitez over the government's handling of the coronavirus pandemic.

The protesters, many wearing soccer jerseys and carrying national flags, chanted "Out Marito" and "Everyone out" while denouncing health authorities for the lack of medicines and intensive care beds.

A 68-year-old woman severely ill with the coronavirus has become the first patient to be medically transported from the Czech Republic as the country seeks to ease the burden on its healthcare system.

She was moved from Usti nad Orlici in the north of the Czech Republic to a hospital in the southern Polish city of Raciborz, some 230 kilometers (143 miles) away. She was accompanied by a doctor for the trip, according to a report by the broadcaster CT.

State-run railways in Italy will operate "COVID-free" high-speed trains on the Rome-Milan route as of next month, its chief executive has announced.

The news came as Italy reached the grim milestone of 100,000 deaths from the novel virus. It is now the second country in Europe to reach such a figure, after the United Kingdom.

Ireland has administered half a million coronavirus inoculations some two months after the country's vaccine program began. The figure represents those who have received both the first and second doses of the vaccine.

On Monday, a baby boy in Greece who was just 37 days old became the youngest casualty of the country's outbreak. "Our sorrow is unbearable," said Prime Minister Kyriakos Mitsotakis.

The Netherlands is extending its curfew until March 31, with exceptions for a general election next week, Prime Minister Mark Rutte has announced.

'Women lost ground' during the pandemic

Ukrainian pharmaceutical company Lekhim — one of Sinovac's partners — has made an agreement with the manufacturer to deliver 5 million doses, including 1.9 million via a state procurement scheme.

The number of confirmed coronavirus cases in Germany has increased by 4,252, according to data from the Robert Koch Institute (RKI) for infectious diseases. The reported death toll, meanwhile, has risen by 255 to 72,189.

The seven-day incidence rate in Germany is currently 67.5 (number of new infections per 100,000 inhabitants over a seven-day period), although there are considerable regional fluctuations.

Tunisia has said its first vaccines were due to arrive as the North African nation begins its mass inoculation process using Russia's Sputnik V jabs.

An initial 30,000 doses are set to arrive Tuesday from Russia, followed by 500,000 doses in the "coming weeks," a presidency statement said, after "constant diplomatic efforts" to procure them.

Japan has decided to stage this summer's Tokyo Olympics and Paralympics without overseas spectators due to concern among the Japanese public about COVID-19, Kyodo news agency has reported, citing officials with knowledge of the matter.

The Olympics, postponed by a year because of the global pandemic, are scheduled to take place between July 23 and August 8 with the Paralympics beginning on August 24 and ending on September 5.

A vaccine developed by India's Bharat Biotech is safe and has shown high levels of antibody response in a mid-stage trial. However, follow-on studies are required to evaluate the shot for children and older people, a peer-reviewed study has shown.

Indonesia has approved Russia's Sputnik V jabs for emergency use, Penny K. Lukito, the chief of the country's food and drug agency, has announced.

More than 1 million doses of the vaccine arrived late on Monday via the COVAX global vaccine-alliance scheme.

About 38 million doses of China's Sinovac Biotech vaccine have already arrived in the country, some of which have been administered in a process that began in January.

New Zealand has opened its first large vaccination clinic. The medical center in south Auckland will initially target household members of border workers. New Zealand has stamped out community spread of the virus and considers border workers and their families vital in its inoculation process.