Residents of New Zealand's biggest city ventured out Sunday after restrictions were lifted. No new local COVID-19 cases were recorded throughout the day. 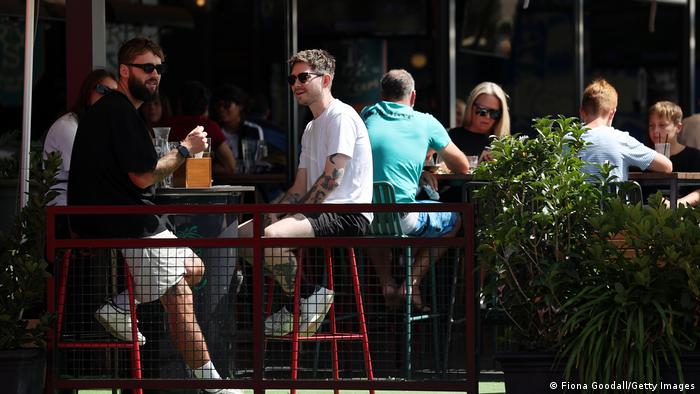 A health official said there were also no new local COVID-19 cases recorded Sunday, marking a full week of no community transmissions across the country.

But schools and businesses can reopen, and people can travel between regions.

Mask-wearing is still obligatory on public transport. Authorities hope restrictions there could be further eased on Friday.

Across the rest of New Zealand, most COVID-19 restrictions were also lifted Sunday.

Throughout the coronavirus pandemic, New Zealand has reported 2,043 COVID-19 cases, including 72 active ones, and only 26 deaths.

Neighboring Australia also had no local COVID-19 cases on Sunday, making it the 37th day of no infections this year.

Australia has recorded no related deaths in 2021.

The nation has begun AstraZeneca vaccinations. Health Minister Greg Hunt was among the first to receive the vaccine on Sunday.

The vaccine rollout had become complicated following a dispute with Italy. However, authorities say plans are back on track.

The weekly number of administered doses is expected to reach one million by the end of March when local production of the AstraZeneca vaccine is set to begin.

"We need documents that we can review. We also don't at the moment have data…about vaccinated people. It is unknown. That's why I would urgently advise against giving a national emergency authorization," EMA managing board head Christa Withumer-Hoche told Austrian broadcaster ORF.

She added, "we can have Sputnik V on the market here in [the] future when the appropriate data have been reviewed…when everything is proven then it will also be authorized in the European Union."

Czech Health Minister Jan Blatny said the upcoming week would be "the most critical" to curb the rise of severe COVID cases. Nearly 7,900 people were being treated in Czech hospitals on Sunday, 1,700 of whom were listedin serious condition or were on ventilation.

Slovakia confirmed its first cases of the South African variant. The fast-spreading mutation was identified in seven cases so far — including people who recently traveled abroad, and those who have not. The country of 5.5 million people has seen an average of 2,400 new cases per day over the past week.

North Macedonia received its first batch of 3,000 doses of the Sputnik V vaccine. The Eastern European country ordered 200,000. Health minister Venko Filipce said the vaccine was aimed at people over 65, and inoculation is expected to begin from the middle of next week.

About 3,000 anti-vaccination protesters in Romania gathered outside the country's parliament building in Bucharest, as authorities announced new movement restrictions. Bars, restaurants, theaters, gambling venues and cafes will close their indoor spaces. The demonstration was attended by George Simion, leader of Romania's far-right AUR party, which has been against compulsory vaccination — although coronavirus vaccines are not mandatory in the eastern European country.

Italian health minister Roberto Speranza told state TV that Italy expects to vaccinate all residents that want it by the end of the summer. About 3.7 million people had at least one vaccination in Italy, just over 5% of the population.

In Israel, restaurants and cafes will be allowed to reopen on Sunday under certain conditions, Prime Minister Benjamin Netanyahu's office announced Saturday evening.

Only guests with a "green passport" may be served indoors. Likewise, unvaccinated guests may only be seated in the outdoor area.

Green passport holders - people who have recovered from COVID-19 and people whose second vaccination was at least a week ago - enjoy relaxed restrictions.

However, distance and hygiene rules still apply to everyone.

Israel's vaccination campaign has been one of the fastest in the world.

Of the nation's nine million inhabitants, more than 4.9 million people have so far received a first shot and around 3.7 million have also received their second one.

The US state of Michigan said homeless people will be eligible for COVID-19 vaccines beginning Monday. State health officials said it was a critical step to curb infections and protect vulnerable populations.