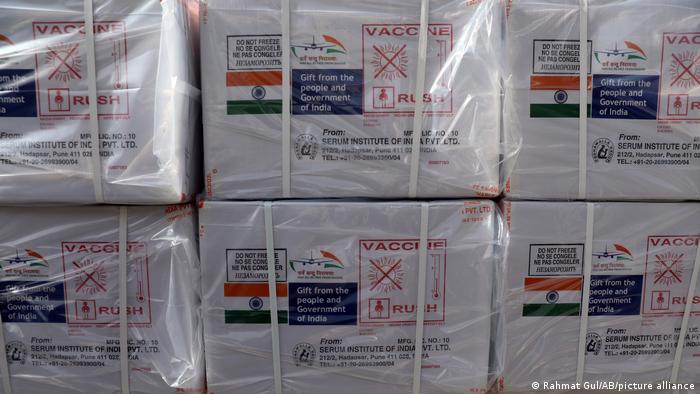 Such shipments of Astrazeneca, like these made in India, won't currently be leaving Italy for Australia

Australia's prime minister on Friday said he "understands" why Italy blocked the planned export of AstraZeneca's COVID-19 vaccine. Nevertheless, Australia asked the European Commission on Friday to review the decision.

Italy, backed by the European Union's executive arm, used export controls to stop around 250,000 doses leaving for Australia earlier this week, after the drug manufacturer failed to fulfill its European Union order.

Despite the hold-up, Australia's Prime Minister Scott Morrison was compassionate: "In Italy people are dying at the rate of 300 a day. So I can certainly understand the high level of anxiety that would exist in Italy and in many countries across Europe," Morrison told reporters in Sydney.

The government "always anticipated" that a problem like this might arise, Morrison said, adding: "That's why we've done a number of things, the most significant of which is to ensure that we have our own domestically produced vaccine."

Australia has secured 53.8 million doses of the AstraZeneca vaccine, of which 50 million will be made locally by pharmaceutical company CSL Ltd.

The Australia-based company expects to release the first batch near the end of March.

Australia had already received 300,000 doses of AstraZeneca's COVID-19 vaccine, that will last until local production of the vaccine ramps up, Hunt said.

"The whole thing is not a hostile act by Italy against Australia," Italian Foreign Minister Luigi Di Maio wrote on Facebook on Friday. He said the decision was simply "part of the regulation approved on January 30 in Europe, the Export Mechanism that prevents vaccine doses for the Union from being shipped and marketed outside the EU."

EU commission chief spokesman Eric Mamer also spoke up in support: "The fact is that the European Union is a major exporter of vaccine doses."

"We believe that this vaccine is an important element of our portfolio and we therefore are expecting the delivery of the agreed doses," Mamer said.

He added: "We are working with the companies in order to ensure that they deliver the doses that are foreseen for the EU. For all those companies that are doing that, there are no problem with exports."

France rallied to support Italy, saying it could follow suit in blocking exports of coronavirus vaccines outside the EU if necessary to enforce its own contracts with drugs manufacturers.

Bernd Lange, a German MEP from the Social Democrat Party (SDP), told DW that Italy's decision to block the export of AstraZeneca vaccine doses to Australia risked triggering a protectionist response from other countries.

His proposed solution was to loosen patent protections for vaccines so that other companies can produce them.

"I think we should really go for a little bit of pressure on the companies to allow other companies to use the patents and the technical know-how to establish more production capacity," Lange told DW.

Australia under less pressure to vaccinate

The EU has been angry with AstraZeneca because it is delivering far fewer doses to the bloc than stated in its original contract. Of the initial order for 80 million doses to the EU in the first quarter, the company will be struggling to deliver half that quantity.

In part due to supply chain issues, the EU has vaccinated only 8% percent of its population compared to over 30%, for example, in the United Kingdom. The EU's sluggish progress on approving various vaccines, including AstraZeneca's, also played a decisive role, however.

Australia began its inoculation program two weeks ago. It is under less pressure than many other countries to vaccinate, having recorded just under 29,000 COVID-19 cases and 909 deaths, from a population of around 25 million.

By comparison, Germany, with a population of over 83 million, has recorded over 71,000 deaths from the virus and over 2 million cases.