German Chancellor Angela Merkel has warned people against ignoring the dangers posed by the coronavirus, saying that the pandemic is not over — and the situation in the country remains serious. 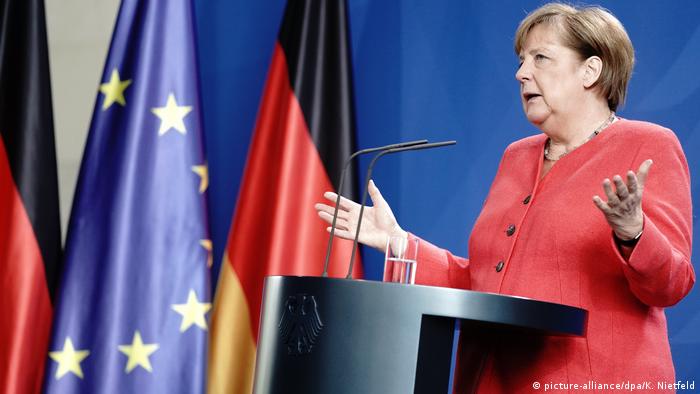 "The danger posed by the coronavirus remains serious," Chancellor Angela Merkel said on Saturday in her weekly video message. "It's easy to forget because Germany has been doing reasonably well through the crisis so far, but that doesn't mean that the danger has been averted," Merkel said, pointing to the emergence of regional outbreaks in recent days.

"Take it seriously, because the situation is serious," she reiterated.

Politicians alone will not be able to put an end to the spread of the virus, Merkel said, adding that it requires everyone to act responsibly. "We must all view it as our shared obligation, and understand that by following the rules on minimum physical distance, facial coverings and hand hygiene, every one of us contributes to our shared destiny," she said.

The Robert Koch Institute (RKI), Germany's infectious diseases body, reported early Saturday that it had recorded 687 new infections in the past 24 hours, bringing the total number to 193,243. The virus death toll grew by six, to reach 8,954, added the RKI.

In the districts of Gütersloh and Warendorf, where an outbreak stemming from a meat-processing facility has forced over 600,000 into lockdown through Tuesday, the infection rate has been falling.

While Warendorf is below the figure of 50 new infections per 100,000 — when increased controls are triggered — Gütersloh is still well above that number, with 164.2 cases per 100,000 on Saturday.

Merkel stressed that tackling COVID-19 and its health and socioeconomic consequences will be at the heart of Germany's upcoming EU Council presidency. Germany is due to take over the rotating presidency in July.

The German leader pointed to the enormous human and economic toll extracted by the health emergency, noting that COVID-19 has already caused over 100,000 deaths across Europe. Key European achievements like the freedom of movement and open borders have also been hit, she said.

Furthermore, the chancellor said that getting Europe's economy back on track is her primary goal during the EU presidency. High on the agenda of the six-month presidency will be climate protection, digitization and the strengthening of Europe's ability to act globally, Merkel said.

The chancellor's statement comes a day after she said Germany is in a good position to help fund a large-scale economic program to aid EU countries to recover after the pandemic.

"Germany had a low debt ratio and can afford, in this extraordinary situation, to take on some more debt," she said in an interview with six European newspapers published on Friday, adding: "As ever, what's good for Europe is good for us."

Germany's federal and state governments have reached agreement on a uniform regulation for travel within the country. It comes after authorities ordered fresh lockdowns in two districts following a massive outbreak. (27.06.2020)

The EU is facing its biggest challenge in history, Angela Merkel has told German lawmakers. The coronavirus pandemic has shown the bloc's fragility she said, as Germany prepares to assume the rotating presidency. (18.06.2020)