Sudan reports its first case. The man died on in Khartoum on Thursday, the health ministry said. He had been on a visit to the United Arab Emirates in early March.

South Africa confirms eight new cases, bringing to 24 the overall number. The country has the highest number of reported cases. President Cyril Ramaphosa is to hold an emergeny cabinet meeting on the weekend.

Kenya confirms its first case. The patient is a Kenyan who traveled from the US via London, Health Cabinet Secretary Mutahi Kagwe says. Soon after the announcement, people were seen stocking up packets of flour, water and soap in a Nairobi supermarket. Public events will no longer be allowed.

Uganda revises its air travel list to include the UK and and US.

Guinea reports its first case, a delegate of the European Union who had recently returned from Europe.

Gabon reports its first case, that of a 27-year-old man who recently returned home from France.

South Africa says it has 17 confirmed cases but later revises the figure to 16.

Chad closes its border with Cameroon.

The World Health Organization says COVID-19 is now a pandemic.

Ivory Coast confirms its first case. The 45-year-old resident had been on a recent trip to Italy.

In Nigeria, finance and petroleum ministers brief President Muhammadu Buhari on the effects of coronavirus on the economy. "It is affecting what we very much depend on, the petroleum industry and therefore revenue,"  Buhari tells health workers. Nigeria, Africa's most populous nation, has confirmed cases since February 28.

Democratic Republic of Congo confirms its first case. The Belgian citizen tested positive at the airport and is quarantined. The DRC is fighting the world's worst Ebola and Measles epidemics.

South Africa sends a plane to collect 122 of its citizens who gotstranded due to the coronavirus outbreak in Wuhan, China. 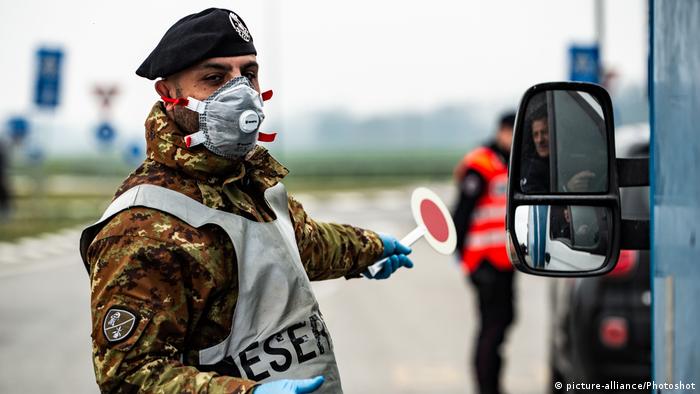 Italy is the worst-affected by coronavirus outside of China

Burkina Faso confirmed its first two cases late on Monday, a husband and wife who returned from a trip to France.

South Africa confirms four new cases. Health officials say the four were among a group of people who had traveled to Italy. The latest cases bring to seven the number confirmed in the country, making it the worst-affected in sub-Saharan Africa.

Nigeria confirms a second case. The health minister says the patient was in Ogun state and had contacted the first reported case in Nigeria, an Italian man who was isolated on February 28. The Italian man had flown to Lagos from Milan via Istanbul in Turkey and traveled on to Ogun state before being isolated.

In Niger authorities have detained a journalist who made a post on Facebook about a suspected case, Amnesty International says.

A German tourist died Sunday of the novel coronavirus in a Sinai resort of eastern Egypt, the health ministry announced, the first death from the epidemic recorded in Africa.

Senegal, with four confirmed cases, is the worst affected in the region to date.

Nigeria was swift and transparent in sharing the COVID-19 sequence from its first case, World Health Organization (WHO) Director-General Tedros Adhanom Ghebreyesus says on Twitter. "This is a true act of solidarity and an important step in stopping the #coronavirus from spreading."

South Africa confirms its second case of the virus.

Togo confirms its first case. The 42-year-old Lome resident tested positive the previous day. She had returned from on a trip to Benin, Germany, France and Turkey. The presidency says she is in isolation at a treatment center and all people she had contact with "have been identified and put in quarantine".

Cameroon confirms its first two cases. The minister of public health says a Cameroonian citizen who had close contact with a French man, the first person to be diagnosed with COVID-19. Both are in isolation in Yaounde Central Hospital.

Uganda: The United Nations cancels Africa Climate Week, regional conference due to be held in the east. The world body notes that Uganda's health ministry has put in place measures for people arriving from affected and showing symptoms to be placed in quarantine at state hospitals.

Nigeria: The WHO and the government in Abuja sayin the seven days since Africa's most populous country reported its first case, no new cases have been reported. Health Minister Osagie Ehanire says 61 people who had contact with the one confirmed COVID-19 case were monitored since the first confirmed case on February 27.

The Nigerian Centre for Disease Control (NCDC) says it plans to boost its spending to prevent a spread. The transport minister meanwhile says the completion of the Lagos-to-Ibadan railway project has been delayed because Chinese workers had not returned to the country due to the coronavirus.

Ghana: President Nana Akufo-Addo say strict checks and screening procedures are being carried out at points of entry to Ghana. He also urges Ghanaians to stop shaking hands and cover their mouths when they sneeze or cough. The country's Catholic bishops outlaws handshakes and communion taken by mouth.

The WHO has described the growing number of places outside China reporting their first COVID-19 cases as "deeply concerning." Public health bodies are struggling to contain the epidemic. Follow DW for the latest updates. (07.03.2020)

The coronavirus outbreak has hit small businesses in Zimbabwe that import tech and clothing from China. As Privilege Musvanhiri reports from Harare, business owners say they are struggling to get supplies. (27.02.2020)

A new HIV treatment, injected every eight weeks, is supposed to reduce stigma and discrimination in Uganda. The drug could be a breakthrough for all those infected — if African leaders are ready to invest. (03.03.2020)

Pangolins may be the latest link in the coronavirus outbreak, but as with SARS and MERS, bats are the most likely original source of the deadly virus. Scientists believe bats' unique genetic quirks make them ideal hosts. (07.02.2020)

So far, two countries in sub-Saharan Africa have officially been affected by the COVID-19 disease: Nigeria and Senegal. But the economic consequences of the coronavirus outbreak are already being felt on the continent. (03.03.2020)