Italy sees its biggest daily rise in COVID-19 cases, Egypt has quarantined a cruise ship on the Nile after an outbreak and the pope will deliver Sunday's sermon via a live stream. Follow DW for the latest updates. 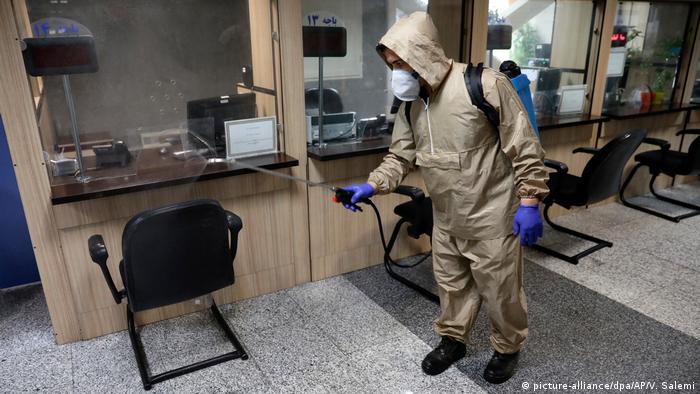 23:58 A 64 year old patient in Argentina died due to the coronavirus, the first such death in Latin America.

23:47 Washington D.C. has recorded its first case of coronavirus. Another case came up in New Jersey, where the affected person had attended the Conservative Political Action Conference in Maryland, Washington.

23:22 An 80 year old man in Sydney has died after testing positive for Covid-19. The number of cases in Australia has risen to 70, and this is the third death.

23:14 Canada said that there has been an outbreak at a long-term care home in North Vancouver. Two elderly residents were detected with the virus in the home. A total of six new cases have been detected in British Columbia.

22:51 Slovenia has prohibited all indoor public events with over 500 people from Saturday. The country has 12 confirmed cases of coronavirus.

22:29 New York has declared a state of emergency in an effort to control spread of the coronavirus, governor Andrew Cuomo said. Washington, Utah Maryland and California have already declared an emergency, as cases continue to rise throughout the US. 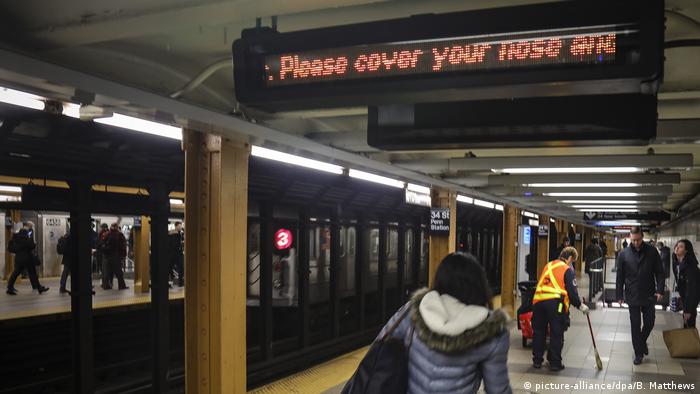 A subway station shows information about caution from the Covid-19 in New York.

22:23 People arriving to Bahrain from South Korea, Italy, Egypt and Lebanon have been asked to self-quarantine for two weeks, the health ministry said in a tweet.

22:14 A cruise ship that may have shared crew with the virus-hit Diamond Princess is currently being tracked, US Vice President Mike Pence said after a meeting with cruise line industry officials. He did not identify the ship that is being tracked.

21:11 Bavaria's Lutheran Church Council has advised on the importance of hygiene during the Eucharist, ahead of Sunday services.

They also advised in a press release that people should avoid touching money when passing it into the alms bowl during ceremonies, and shaking hands with each other or with the priest — a key part of many services — was not advised.

20:18 Two residents of a North Vancouver nursing home in British Columbia have tested positive for coronavirus, taking the total number of cases in Canada to 51.

20:00 US officials say two more people have died from COVID-19 in Washington state, raising the death toll in the country to 19.

19:44 Italy will enact tough measures to limit the spread of coronavirus, including telling people not to enter or leave the hard-hit region of Lombardy and 11 provinces in other regions, according to Reuters news agency.

Schools in the areas covered by the decree will remain shut until at least April 3. All museums, gyms and swimming pools will also be closed and leave for health care workers is to be canceled.

19:16 The IIHF has canceled the Women's World Ice Hockey Championships in Canada due to the coronavirus outbreak. The tournament was slated to run March 31 to April 10 in Halifax and Truro.

18:28 The European Central Bank has asked its 3,700 employees based in Frankfurt, Germany to work from home on Monday in order to test its emergency plan for confinement.

18:03 Egypt has confirmed a further 33 cases of COVID-19 on a cruise ship in quarantine on the Nile River, the country's health minister told reporters. A total of 45 people have tested positive for coronavirus.

Read more: Coronavirus in sub-Saharan Africa: A week in review

16:44 South Africa has confirmed its second case of COVID-19.

Sub-Saharan Africa has so far not been as badly affected by the outbreak, with only a handful of countries reporting confirmed cases. However, the global market downturn could spell disaster for business in developing countries.

16:39 The number of cases in Germany rose from 684 to 795 during the course of Saturday, the Robert Koch Institute has announced.

16:22 A US Navy officer stationed in Italy has been diagnosed with coronavirus, according to the US European Command. The service member was stationed in Naples and is currently "restricted to their residence."

The US European Command has around 70,000 personnel stationed in 51 countries.

16:15 Berlin police department reported that an officer has tested positive for COVID-19.

"He did not become infected at work. The division in question is at their quarters," the police department wrote on Twitter. "Our service will not be affected!"

14:33 Another cruise ship has been quarantined, this time on the Nile in Egypt. More than 150 tourists and a local crew have been told to stay on board a boat near Luxor after 12 people tested positive for the virus.

Similar measures, aboard the Diamond Princess cruise ship in Japan in February, were described as a "failure" after 540 people were infected.

14:10 A hotel in the Chinese city of Quanzhou — in eastern Fujian province — has collapsed, trapping about 70 people. The hotel near the country's southeast coast was reportedly being used as a quarantine facility. About two dozen people have been pulled alive from the rubble. Video shared by China's Xinhua state news agency showed rescue workers combing the collapsed building.

13:17 Another passenger who was on board the Diamond Princess cruise ship has died, bringing the total death toll from the ship to seven, according to Japanese broadcaster NHK.

13:15 The Pope will be keeping his distance from worshippers, the Vatican has announced. On Sunday he will address worshippers from the window of the Apostolic Library rather than in St. Peter's Square. His prayer will then be live-streamed onto screens in the square.

"I wish to express again my closeness to those who are ill with the coronavirus and to healthcare workers who are caring for them," Pope Francis wrote on Twitter on Friday.

12:20 The leader of Italy's co-ruling Democratic Party Nicola Zingaretti said on Saturday that he had tested positive for the novel coronavirus. "I have coronavirus too," Zingaretti said in a video posted on Facebook. Italy has been the European country that's hardest hit by the virus, with a total of 4,636 cases and 197 deaths as of Friday.

"I'm fine but I will have to stay home for the next few days," the politician wrote on Twitter. "Courage to all and see you soon!"

11:40 Iran says 21 more people have died from COVID-19, bringing the country's death toll to 145. More than 1,000 infections were also confirmed overnight, bringing the total to some 5,823 cases nationwide. 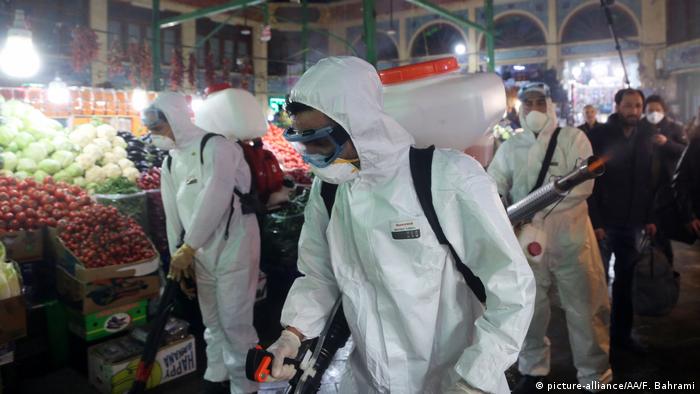 South Korea — the hardest-hit country after China — said it had recorded 448 new cases on Saturday, making a total of 7,041. Seoul also reported four more deaths, raising the death toll to 48.

11:16 Malta's first case of the novel coronavirus has been detected in a 12-year-old Italian girl who lives there, Health Minister Chris Fearne said on Saturday. The girl tested positive for the COVID-19 virus early on Saturday and is receiving treatment in an infectious diseases unit.

10:00 Philippines President Rodrigo Duterte will declare a public health emergency to help contain the spread of the new coronavirus, after the country recorded its first case of community transmission, officials said on Saturday.

09:45 An Iranian lawmaker, 55-year-old Fatemeh Rahbar, died from COVID-19 on Saturday, state news agency IRNA reported. She is the second lawmaker killed by the virus in Iran and one of seven politicians and government officials who have died in the outbreak since the country reported its first cases in mid-February.

07:52 US officials have yet to decide on where to allow the cruise ship Grand Princess, with 21 virus cases aboard, to dock in California. President Donald Trump said he would have preferred not to let the passengers disembark onto American soil but would defer to the recommendations of medical experts. Meanwhile, 15 US citizens have been quarantined in a hotel in Bethlehem over COVID-19 fears, said the Palestinian government.

07:30 The spread of the new COVID-19 virus is straining Germany's complex healthcare system. The number of confirmed cases in the country has risen to 684, according to the Robert Koch Institute. To understand more about the kind of pressure Germany's healthcare system is currently facing, read this piece: Coronavirus in Germany: Health care system under pressure

06:16 The number of confirmed COVID-19 cases in Afghanistan has jumped to four, Reuters reported, citing the country's health ministry. Of these, three cases have been registered in western Herat province, officials said. The province borders neighboring Iran, one of the countries worst affected by the virus outside of China, with over 4,000 cases and more than 100 deaths.

03:44 Chinese exports this year have fallen 17.4%, the biggest drop since February of last year when the US-China trade war was heating up.

03:22 Mexican authorities reported their sixth confirmed case of the novel coronavirus. The man, who contracted the virus abroad, is in "grave condition."

02:48 The US State Department warned its nationals against traveling to the central Asian countries of Azerbaijan and Turkmenistan, citing coronavirus concerns.

02:02 Iceland declared a state of emergency after two Icelandic nationals contracted the novel coronavirus in the country. The new cases brought the total number of cases to 43, reported Iceland Monitor news site. 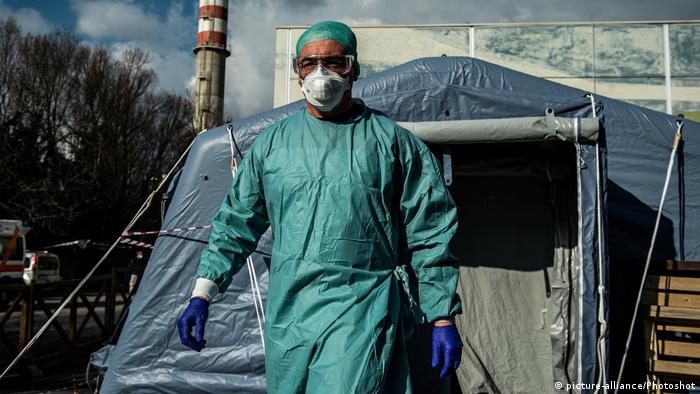 Italy has become one of the hardest hit countries in Europe

01:53 The American Israel Public Affairs Committee (AIPAC) said at least two attendees of its annual conference in Washington have tested positive for the novel coronavirus.

Read more: Opinion: Will the new coronavirus spell the end of globalization?

00:24 Chinese authorities report 99 new cases, marking a drop from 143 a day before. The death toll in China reached 3,070 of which the overwhelming majority is located in the Hubei province, dubbed the epicenter of the outbreak.

How does testing for the coronavirus work?

Who should be tested for the coronavirus — and how? Here's what you need to know about being tested for COVID-19, and what testing may look like in the future. (04.03.2020)