Lee Man-hee of the Shincheonji Church of Jesus faces possible murder charges after being accused of failing to cooperate in efforts to contain the virus. The sect leader got down on his hands and knees to apologize. 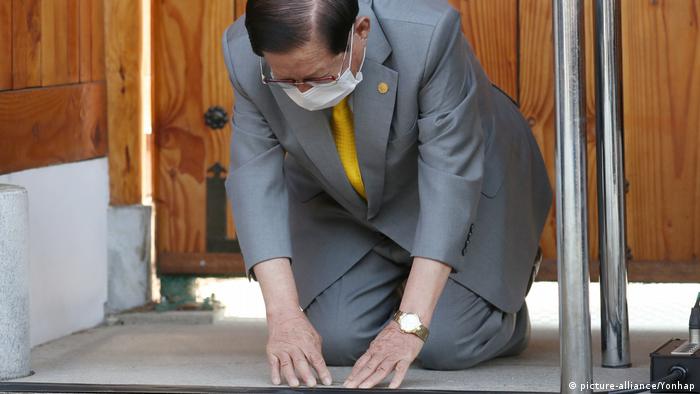 A Christian sect leader apologized Monday for the coronavirus spreading across South Korea after accusations his church was responsible for a majority of the infections in the Asian country.

Lee Man-hee, the leader of the Shincheonji Church of Jesus, made his first public appearance since the virus broke out in South Korea more than two weeks ago. He knelt down as a gesture to illustrate his remorse.

The 88-year-old leader of the church confirmed that one member had infected numerous others, calling the epidemic a "great calamity." He added: "We did our best but were not able to stop the spread of the virus."

Members of the fringe Christian group are believed to have infected one another and then traveled around the country.

Some mainstream Christian groups reject Shincheonji as a religious institution, claiming it to be a cult.

Lee Man-hee is a self-proclaimed messiah and Seoul's city government have asked prosecutors to press murder charges against him for failing to cooperate in efforts to contain the virus. The city government said it had filed a criminal complaint with the the capital's Central District Prosecutors' Office, asking for an investigation of Lee and 12 others on murder charges and violations of disease control. Lee has denied the allegations saying he has been fully compliant with the authorities.

However, Seoul Mayor Park Won-soon said that if Lee and other leaders within Shincheonji had cooperated, measures could have been implemented to prevent deaths from the virus. Park described Lee as "the chief director of this crisis" in a Facebook post late on Sunday.

Of the 599 new cases in South Korea announced on Monday, 377 were from the country's fourth largest city, Daegu, home to a branch of the Shincheonji Church of Jesus, to which the majority of the country's cases have been traced after some its members visited China's Wuhan city, the epicenter of the disease. More than half of South Korea's 4,000 cases have been linked to Shincheonji.

Stock markets around the world have plunged amid mounting concerns about the impact of the COVID-19 virus on business. The virus has continued to spread, with 27 new cases in Germany. DW has the latest here. (28.02.2020)

The number of coronavirus cases in Germany has risen sharply; official data shows infections have reached 129, compared with 66 on Saturday. More than half are in North Rhine-Westphalia. Follow the latest from DW here. (01.03.2020)

The spread of the coronavirus is having an impact on all aspects of life in many parts of the world. Here are the latest updates on how the virus is affecting the world of sports. (02.03.2020)

More countries across Europe have confirmed cases of COVID-19, but EU countries said borders will remain open. Hamburg confirmed its first case — a hospital staffer in the pediatric ward. All the latest updates here. (27.02.2020)

After weeks of ambivalent coronavirus crisis management, Japan's government said it will close every school in the country. Critics said the move is based more on politics ahead of the Olympics than public health. (28.02.2020)