Conflict Zone: ′It′s the violations of human rights we are talking about′ | World | Breaking news and perspectives from around the globe | DW | 13.12.2018

Conflict Zone: 'It's the violations of human rights we are talking about'

35 guests in 23 cities around the world: 2018 was a busy year for Conflict Zone, DW's flagship political interview program. These were some of the highlights.

From Manila to Hong Kong, from Tel Aviv to Geneva: In 2018, DW’s flagship interview program Conflict Zone traveled the world in order to confront high-ranking politicians and hold them to account.

The program’s hosts interviewed current and former heads of government, foreign ministers and party leaders, as well as members of different parliaments and organizations.

Most of the interviews focused on issues such as crises in the European Union, tensions in the Middle East or the defense of human rights. 2018 marks the 70th anniversary of the Universal Declaration of Human Rights.

In Hong Kong,Horace Cheung, VP of the largest pro-Beijing party in the territory, said the human rights situation there was improving and he hoped to clarify misunderstandings in the international community.

Host Tim Sebastian reacted and asked him: "What's the misunderstanding? It’s the violations of human rights we are talking about."

In Bogota, Colombia,  outgoing president and Nobel Peace Prize winner Juan Manuel Santos was challenged on concerns by the UN regarding violence against human rights’ defenders and allegations of extrajudicial killings by Colombia's security forces. 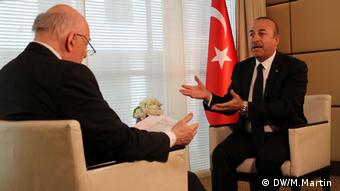 Tim Sebastian confronted Cavusoglu with a report on Turkey by the UN High Commissioner for Human Rights which dealt with allegations of torture, restrictions on freedom of expression or arbitrary expropriation of private property.

Brexit and the future of the EU

Conflict Zone interviews also focused on the challenges that European leaders are facing, such as further European integration, the rise of populist parties, divisions within the bloc and the uncertainty over Brexit negotiations. 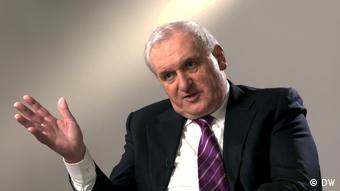 Former Irish PM Bertie Ahern criticized British Prime Minister Theresa May and said he would be her first supporter if she were "consistent.".

Alexandre Holroyd, a French MP from Emmanuel Macron's En Marche party, also had clear words on Brexit when he said that "there is no one including the president in France who thinks that Brexit is a good thing."

But just as some politicians were concerned about one member state leaving the EU, others discussed the prospects of joining the club, such as Serbian Prime Minister Ana Brnabic.

"As much as our interest is to join the EU, I think the enlargement to cover (the) Balkans is also in the EU's interest," Brnabic told Tim Sebastian in Berlin.

Other Conflict Zone interviews on Europe

Tensions in the Middle East

Conflict Zone traveled this year to Jerusalem, Beirut, Tel Aviv, London, Geneva and Berlin in order to confront guests on the ongoing tensions between Israel and the Palestinians, in particular on the Gaza border.

Michael Oren, Israeli deputy minister for public diplomacy and a former ambassador to the US, defended Israeli military action by saying that "there was a threat to the border and the soldiers are charged with defending our border from terrorists."

Hamas' representative in Lebanon Osama Hamdan had a different view. 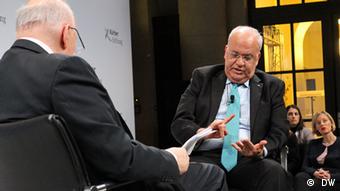 One of the highlights this season on Conflict Zone was the interview with Chief Palestinian Negotiator Saeb Erekat at the Berlin Foreign Policy Forum.

"No one brought bombs, no militants hide among the people," he said.  "All the killed people were civilians. I dare anyone to say that there was one militant with the people."

For his part, Palestinian Chief Negotiator Saeb Erekat said he has done "everything humanly possible to make peace."

"If we don't help ourselves as Israelis and Palestinians, nobody else will help us," he stressed.

This was the first time Conflict Zone conducted an interview in front of an audience, as part of a foreign policy forum in Berlin, and it was one of the season's final highlights.

Other Conflict Zone interviews on the Middle East

Conflict Zone will return with more political interviews on January 16, 2019.

The gloves were off when Serbian Prime Minister Ana Brnabic appeared on DW's Conflict Zone. The interview whipped up a frenzy in a country not used to politicians having to answer hard-hitting questions. (16.11.2018)

Martin Schulz: 'I am not a bad loser'

The former president of the European Parliament failed dramatically in his bid to unseat Chancellor Angela Merkel. But is he looking for a comeback? He talked to DW's Conflict Zone. (21.11.2018)

Over 100 dead. Thousands wounded. Israel has been unapologetic in the face of international outcry over its actions on the Gaza border. Michael Oren tells Conflict Zone there was "no choice" but to use lethal fire. (24.05.2018)