Pro-democracy activists say China is silencing dissent in Hong Kong. DW's Conflict Zone asks Horace Cheung, VP of the largest pro-Beijing party in the territory, whether he is willing to allow China to curtail rights.

It was a case that grabbed headlines earlier this year in Hong Kong.

Benny Tai, a democracy activist and expert in constitutional law, became the object of a serious denunciation campaign by Chinese and Hong Kong officials after he gave a lecture in which he spoke about independence for Hong Kong.

He was publicly rebuked by senior officials and variously described as a "threat to China's national security." One commentary even implied separatists like Tai should be crushed "with a sledgehammer."

Freedom of speech is a principle enshrined in Hong Kong's Basic Law, so when Conflict Zone's Tim Sebastian spoke to the vice-chairman of the main pro-Beijing party, he asked why the reaction to Benny Tai had been so harsh.

Contrary to the laws 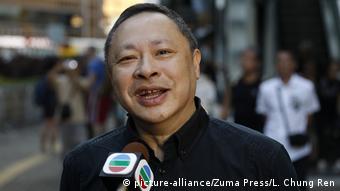 Benny Tai, a law professor and democracy activist, was among the initiators of the 2014 pro-democracy movement in Hong Kong.

"I can say that professor Benny Tai certainly enjoys his right of speech in Hong Kong, but he must obey the law in Hong Kong," said Horace Cheung.

The vice-chairman of the Democratic Alliance for the Betterment and Progress of Hong Kong (DAB) added that promulgating independence in Hong Kong is both contrary to the laws and to the interests of the people.

The case has reignited an already tense debate in Hong Kong about its relationship with China, which has controlled the former British colony since a 1997 handover which set out to give the region a high level of autonomy in most areas except in foreign policy and defense matters.

However, critics and international observers believe that autonomy is under increasing pressure by China, which is said to be encroaching on the region and restricting freedoms.

Cheung, however, talked of a misunderstanding in the international community and says that "all such kinds of rights have been protected in Hong Kong." 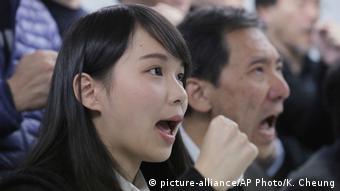 Pro-democracy activist Agnes Chow was blocked from standing in an election.

One right that has been under scrutiny is the right to participate in political life in Hong Kong.

Earlier this year, for instance, student leader Agnes Chow was disqualified from running in an election because of her party’s pro-democracy stand.

The move was widely seen as political interference from China.

Asked about this case by Tim Sebastian, Cheung stressed all candidates should meet legal criteria if they didn't want to be disqualified.

He added that if candidates disagree with the administration rules, they have legal channels where they can fight for their rights.

But whereas Cheung and other lawmakers have been vocal in their criticism of democracy activists, they haven't been as open about alleged human rights violations in mainland China.

Tim Sebastian pointed to a report by the United Nations High Commissioner on Human Rights which refers to "urgent appeals regarding arbitrary detentions, enforced disappearances, ill-treatment and discrimination" in China, and pressed Cheung on why he has been silent on these issues.

Cheung evaded the questions and spoke about how the human rights situation in Hong Kong "has been improving day by day."

He then also stressed that "every country has its own problems" and "even Western countries have problems about human rights." 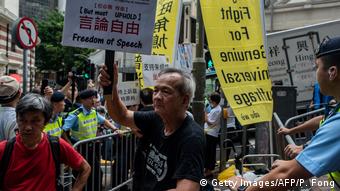 Pro-democracy activists have taken to the streets to protest against Beijing's growing control over Hong Kong.

One problem that Hong Kong seems to be facing is what the Hong Kong Journalists Association described as a regression in press freedom.

Tim Sebastian highlighted the organization’s 2017 yearly report, which speaks of a "blatant intervention in the Hong Kong media" and says "there is no doubt that pressure from Beijing is the main reason for the erosion of press freedom."

The vice-chairman of the DAB, however, rejected accusations that media outlets in Hong Kong have experienced growing interference by Chinese authorities.

Cheung argued that mass media in Hong Kong are "quite independent" and "will not be intimidated by any oppression from the Hong Kong administration or the central government."

"You can see from the newspaper every day that there is still much criticism allowed in Hong Kong," he said. 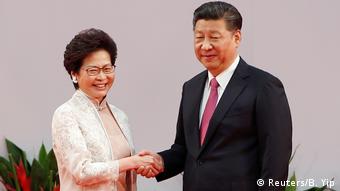 As well as the media, school education has also been in the spotlight in Hong Kong, in particular what role Chinese history should play.

In 2016, Cheung said it was necessary to make Chinese history compulsory and he described the situation as being "urgent."

Asked whether students would get the same highly-censored version of history that is taught on the mainland, Cheung said that he only pointed to a general direction, but he would refrain from interfering with the actual curriculum.

"When we are talking about the syllabus and curriculum in school, actually this is decided by a professional committee which is composed of education professionals only," he said.

"There are no politicians in this committee," he added.

Cheung’s arguments will likely only increase controversy in Hong Kong about Beijing’s growing control over the former British colony, 21 years after it was returned to China.

Amid growing concern for Hong Kong's freedoms, the territory's police has sought to ban a pro-independence group. The move comes as China attempts to tighten its grip on the semi-autonomous region. (17.07.2018)

Twenty one years since the transfer of Hong Kong's sovereignty from the UK to China, considerable opposition to Beijing's rule remains. DW spoke to law professor Johannes Chan about potential consequences of protest. (29.06.2018)

Seven officers have been found guilty of causing bodily harm to social worker Kenneth Tsang, a prominent pro-democracy advocate. Footage of the attack sparked outrage around the world during 2014's massive protests. (14.02.2017)