The Serbian PM Brnabic told DW's Conflict Zone that the 1995 massacre in Srebrenica was "not genocide." She also said Serbia was not ready to join the EU before 2025.

The Srebrenica massacre in 1995 was "a hideous crime, it was a war crime" Serbian Prime Minister Ana Brnabic said on this week’s edition of DW’s political talk show Conflict Zone.

Brnabic emphasized that "it was a terrible, terrible crime" but she disputed that the term genocide applied to Srebrenica. "Genocide is when you are … killing the entire population, the women, children and this was not that case."

She added that "it was not done in the name of the Serbian people and Serbia cannot, Serbs cannot collectively be blamed for what happened. I do not think it was a genocide."

The denial is drawing harsh criticism at home and in the region.

"Serbia by far is the best-case example in the region of how to deal with the war crimes,” the prime minister told host Tim Sebastian, when asked about why so few senior officials had been prosecuted.

"Perhaps, we can do more, and we will. To ensure the rule of law in Serbia … and to deal with the past and turn towards the future, Serbia will do its part."

Brnabic also told DW that her country is not ready to join the European Union and won’t be before 2025. "If the EU said you can join tomorrow I'd say no because we are not ready. Which would mean that again we get an enlargement in which Serbia would be worse off and Europe would be worse off," she said. Brnabic said past enlargement of the European Union had left the bloc weaker when countries had joined too early. 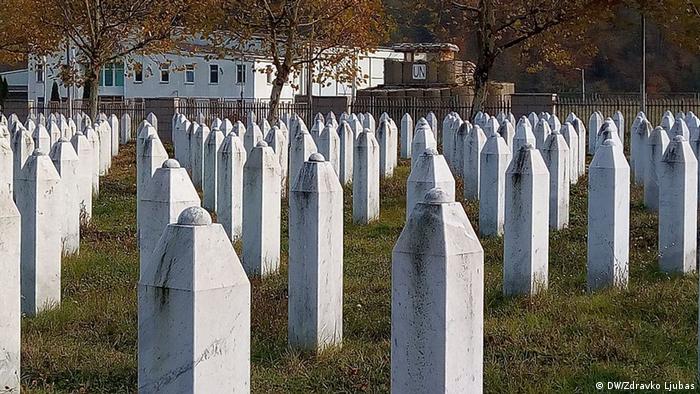 Up to 8,000 Muslim men and boys were murdered by Bosnian Serb security forces in Srebrenica in 1995.

"I do not think that enlargement in the past was particularly successful." The Serbian prime minister sees the process of joining the European Union as the best way of achieving the necessary reforms. "Once we implement the reforms, the EU will come as a natural consequence," she said.

"What is important is that we actually implement all the reforms so that as a society, politically and economically, we become fit for the EU."

"We want to be part of the EU because the EU is a peace project and it's a successful one because we have for the first time in history a longterm peace in Europe."

Relations with Kosovo
Normalizing relations with Kosovo will be vital for Serbia to join the EU. Most European Union countries have recognized Kosovo as independent but Belgrade still claims the territory which it has not administered since 1999.  The European Commission has also stressed to Serbia and Kosovo, which has also applied for EU membership, that both must resolve their dispute before they can join.

Human rights
When confronted with EU criticism on the lack of progress on safeguarding press freedoms, Branbic said that "there is freedom of the media in Serbia. I see criticism of the president, of myself, of the government every single day in the media," she insisted.

"We have a lot to deal with in Serbia and we are dealing with it and I think the situation is improving. It is by no means worse than it used to be."

In July 1995 Bosnian Serb troops stormed the UN safe area around Srebrenica and before the eyes of Dutch UN troops. DW's Zoran Arbutina explains what happened in Europe's worst atrocity since WWII. (27.06.2017)

UN war crimes judges have found former Bosnian Serbian general Ratko Mladic guilty of crimes against humanity and genocide during Bosnia's 1992-1995 war. Mladic was removed from the courtroom after an angry outburst. (22.11.2017)

The presidents of Serbia and Kosovo have met in Brussels but again failed to agree on details to normalize relations. Both countries have been told they must push for normalcy for a chance to join the European Union. (09.11.2018)

A Serbian commander from the Kosovo War has been offered a job teaching at Belgrade's military academy. The government is not bothered by the fact he was jailed for war crimes. It is simply playing the nationalist card. (20.10.2017)