Is Bosnia going backwards, into war?

Outgoing Serb member of the Bosnian Presidency, Mladen Ivanic, tells DW in an exclusive interview he is no longer optimistic his country will avoid a new outbreak of sectarian fighting.

Is Bosnia headed towards a new sectarian war? The outgoing Serb member of the presidency of Bosnia and Herzegovina says he is no longer optimistic his country will not slip back into war.

In an exclusive interview with DW, Mladen Ivanic says he used to believe that people of Bosnia were "too tired" to return to fighting like the kind that ravaged the country in the early 1990s. 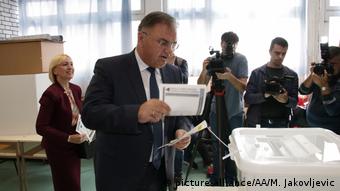 Mladen Ivanic casting his ballot in Banja Luka, Bosnia and Herzegovina, on October 7

Political rhetoric is heating up in Bosnia and Herzegovina and recent elections have done little to calm nerves. The Dayton peace agreement ended Bosnia’s civil war more than two decades ago, but left the country divided. Deep scars from the war were mostly ignored.

Is Bosnia backsliding into renewed violence?

What does Ivanic now think? "Of the war, I still believe just that the people are tired. But the first two, I'm not so optimistic like I was before," Ivanic said.

The Dayton agreement divided Bosnia into two semi-autonomous parts: a Muslim-Croat federation and a Serb-controlled republic, the Republika Srprska (RS).  The fighting stopped, but sectarian politics did not. 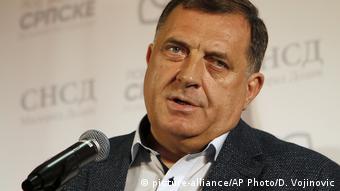 Recent Russian weapons shipments to RS police and a possible deployment of Russian military advisors in the Serb-run half of Bosnia have raised concerns about the potential for increased violence as well as Moscow’s influence in the region.

"There is this friendly relation between the people. But I don't think that Russia is so much involved in here," Ivanic added.

The country had been on the path to NATO membership.  But that now seems to be in doubt.  Ivanic's successor says it won't happen.

"My generation will not decide about the membership within the NATO. That is for the some other generations," Ivanic said. But he added that Moscow did not oppose Bosnia joining the EU, "NATO is maybe the problem but not the EU."

Sebastian asked Ivanic "there is no respect for press freedom here, is there?" The outgoing presidency member had a startling response. 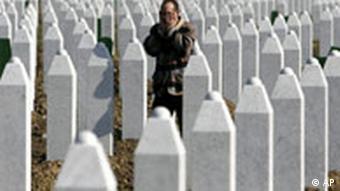 A Bosnian Muslim man prays at the Srebrenica-Potocari memorial centre

In the closing days of the war, Bosnian Serb forces rounded up and systematically killed up to 8,000 Muslim men and boys outside Srebrenica.  It was the one of the low points in a war with many.  Bosnian Serb military and political leaders were eventually put on trial for the massacre at theInternational Criminal Tribunal for the Former Yugoslavia.

In the years after Dayton, RS political leaders, including Ivanic acknowledged responsibility for the killings, but now Bosnian Serb leaders are backtracking.

Ivanic said politicians now talking about Srebrenica is abuse of the victims even though he has appeared at remembrance ceremonies in the past.

"This is something for the historians and not for the current politicians," Ivanic said.
In the interview Ivanic blamed the International Criminal Tribunal, "my impression is that the court was mainly political."

"Every side has here victims," Ivanic said when Sebastian asked how the war would be remembered.

"To expect that the current generations who were involved in the war are ready to make a common approach to this war, this is so wrong that you cannot imagine."

Nationalist leader Milorad Dodik is leading in the race for the Serb seat of Bosnia-Herzegovina's three-member presidency. His victory is a blow to the fragile unity of the country created after the brutal civil war. (08.10.2018)

A surprising bromance between a Bosnian Serb secession advocate and Russian strongman Vladimir Putin has observers on edge. Moscow's aims are complex, but there is no mistaking its presence in the election campaign. (06.10.2018)