UN war crimes judges have found former Bosnian Serbian general Ratko Mladic guilty of crimes against humanity and genocide during Bosnia's 1992-1995 war. Mladic was removed from the courtroom after an angry outburst. 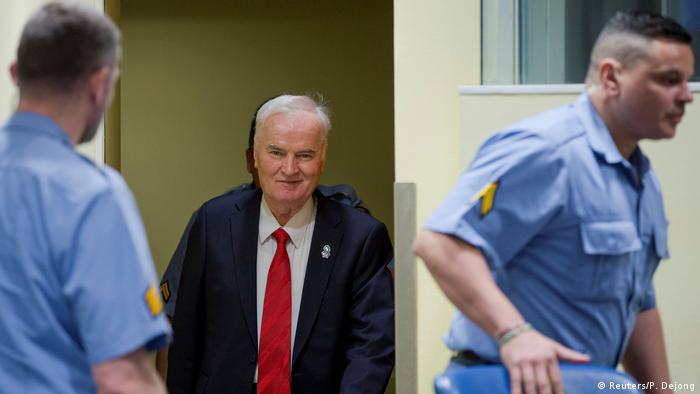 Former Bosnian Serbian commander Ratko Mladic, was found guilty of charges of crimes against humanity, war crimes and genocide for his role in the 1995 massacre in Srebrenica, ruled the United Nations' Yugoslav war crimes tribunal on Wednesday.

Mladic was sentenced to life in prison by the three judge panel on the United Nations' International Criminal Tribunal for the former Yugoslavia (ICTY).

"For having committed these crimes, the chamber sentences Ratko Mladic to life imprisonment," judge Alphons Orie told the court after convicting Mladic on ten out of 11 charges. 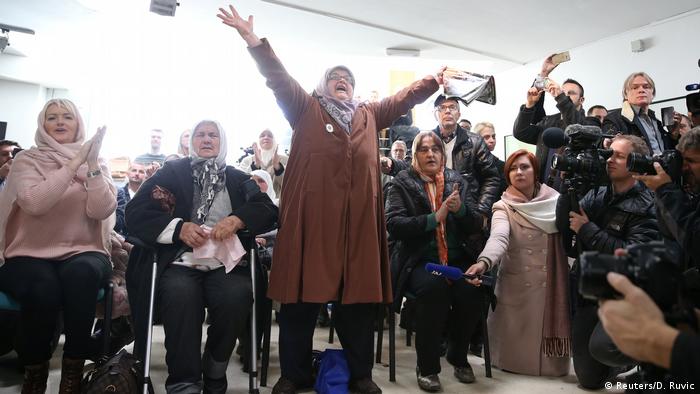 The reading of the verdict was temporarily adjourned after an angry outburst by 74-year-old Mladic, who was removed from the courtroom.

His defense team had tried to delay the hearing on the grounds of Mladic's increased blood pressure, saying that he was in ill health after suffering three strokes.

Mladic's lawyer said that they plan on appealing the ruling.

- Bosnian bone-hunter: No punishment is enough for Mladic

- What was the Srebrenica massacre?

The killing of nearly 8,000 Muslim Bosniak men and boys was ruled a genocide by the chamber, the judges said on Wednesday. The killings are regarded as the worst atrocity to take place in Europe since the Holocaust.

Ahead of the verdict, skirmishes were reported outside the court. As DW correspondent Catherine Martens was speaking with a member of the activist group Mothers of Srebrenica, a man approached with a Serbian flag.

"I can show my Serbian flag wherever I want," he said. The situation then turned violent and police had to step in.

The UN High Commissioner for Human Rights Zeid Ra'ad al Hussein hailed Mladic's conviction, calling it a "momentous victory for justice." In a statement, he said the former general is "the epitome of evil, and the prosecution of Mladic is the epitome of what international justice is all about."

The President of the Mothers of Srebrenica association said she was "partially satisfied" with the verdict.

"It's more than for Karadzic. But they didn't find him guilty for the accusation of genocide in some villages," said Munira Subasic.

Germany welcomed the verdict, with a Foreign Ministry spokeswoman calling it "an important" contribution toward processing crimes that occurred in former Yugoslavia.

The European Union called on countries in the Balkan region "to work towards reconciliation, regional cooperation and good neighborly relations."

"Delivering justice and fighting impunity for the most horrific crimes is a fundamental human obligation," an EU spokesperson said in a statement.

'The Butcher of Bosnia' sentenced to life

Mladic denied the 11 charges against him that included genocide, war crimes and crimes against humanity that were committed during the 1992-1995 Bosnian war that killed 100,000 people and displaced 2.2 million.

He was found guilty of commanding forces that committed the worst atrocities of the war, including the Srebrenica genocide as well as the deadly three-year siege on the Bosnian capital Sarajevo.

The former general, who has been dubbed "The Butcher of Bosnia" but remains a hero to many in Serbia, is the highest military commander to be judged by the tribunal.

Mladic's defense lawyers previously slammed the trial as "political" and insisted their client is "not a monster." In the days leading up to Wednesday's verdict, the defense team filed several requests to have their client's health assessed.

The ICTY was set up in 1993 in The Hague to process major crimes committed during the Yugoslav wars.

Who is Ratko Mladic, the 'Butcher of Bosnia'?

For six years the former Bosnian Serb army chief Ratko Mladic stood trial at the Hague Tribunal. On Wednesday, 27 years after the war's end, he was sentenced to life in prison. (22.11.2017)