A ceremony to mark 20 years since the Srebrenica massacre has ended in turmoil after Serbian PM Vucic was chased away by a stone-throwing crowd. Earlier, he fiercely condemned the mass killing. 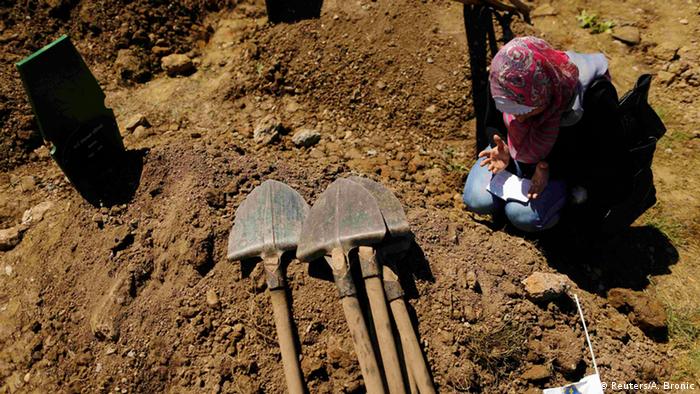 A crowd throwing stones and bottles on Saturday chased Serbian Prime Minister Aleksandar Vucic and his delegation away from a ceremony in Srebrenica marking the 20th anniversary of the worst massacre in Europe since the Second World War.

Vucic also faced boos and jeers from some of the crowd gathered for the ceremony to commemorate the mass killing, in which thousands of Muslims were killed by Bosnian Serb forces toward the end of Bosnia's 1992-95 war.

The Serbian Foreign Ministry called the Saturday attack "an assassination attempt" and issued a protest to their counterparts in Bosnia. Vucic told reporters in Belgrade that a stone hit his mouth but did not hurt him.

The Presidency of Bosnia and Herzegovina, the three-member body representing Bosniaks, Serbs and Croats, strongly condemned the incident, which was also decried by Council of Europe Secretary General Thorbjorn Jagland and UN Deputy Secretary-General Jan Eliasson.

Prior to the service, Vucic had condemned the Srebrenica massacre as a "monstrous crime."

"There are no words to express regret and pain for the victims as well as anger and bitterness towards those who committed the monstrous crime," Vucic said in a statement issued before he attended the ceremony.

"Serbia clearly and unambiguously condemns this horrible crime and is disgusted with all those who took part in it and will continue to bring them to justice," he added. 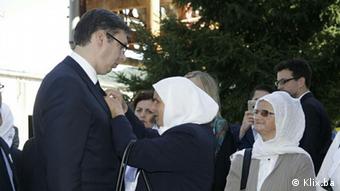 Vucic met with relatives of some of the victims

As the Balkan nation observed a day of mourning, some 50,000 people, including world leaders, gathered to commemorate the event.

Bill Clinton, who was the US president at the time of massacre, Turkish Prime Minister Ahmet Davutoglu, Britain's Princess Anne and Jordan's Queen Noor were among the dignitaries who attended the memorial service.

At a separate ceremony, families also buried the remains of 136 people who died during the war. The bodies were buried next to the graves of over 6,000 other victims of the Srebrenica massacre.

The massacre occurred when Bosnian Serb troops, led by General Ratko Mladic - who is currently on trial in The Hague - overran Srebrenica in July 1995, while it remained an enclave within Serb-held territory. Some 25,000 people remained in the town, seeking help from Dutch UN peacekeepers. The UN soldiers were outnumbered and the Serb forces immediately slaughtered some 2,000 men and boys before pursuing and killing some 6,000 more who fled into the forests around the city.

Thousands of Srebrenica survivors and other people walked to the site of the massacre in the days leading up to the anniversary.

"It took me seven days to reach Nezuk [after escaping Srebrenica]. It was horrible…dead people, blood everywhere. I saw my neighbors, friends, relatives, but they couldn't be helped," Nedzad Mujic, who participated in the march, told the AFP news agency.

On Wednesday, Russia vetoed a UN resolution recognizing the Srebrenica massacre as genocide. Moscow claimed it would create divisions in the Balkans. Britain, which put forward the proposal, condemned the move as outrageous.

Twenty years ago, Srebrenica became the scene of the worst war crime after World War II. Victims of the genocide are still subject to derision and continue to be exploited for political ends, writes Benjamin Pargan. (11.07.2015)

Moscow has called for people responsible for Srebrenica massacre to face justice "as soon as possible." The statement comes only days after the Kremlin vetoed a UN resolution condemning the murdering of 8,000 Muslims. (10.07.2015)