The war crimes judgement in the case of Ratko Mladic will be delivered next month, UN judges said. The Bosnian Serb general faces war crimes and genocide charges stemming from the 1990s Balkans conflict. 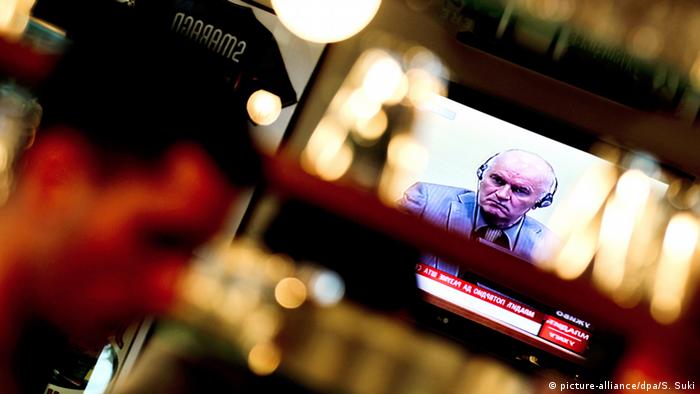 The long-awaited verdict in Ratko Mladic's years-long trial will be delivered on November 22, judges from the United Nations' International Criminal Tribunal for the former Yugoslavia (ICTY) announced Wednesday.

Mladic faces 11 war crimes charges, including two of genocide, for an alleged campaign of ethnic cleansing in the 1992-1995 Bosnian war, one of the conflicts in the Balkans that accompanied the collapse of Yugoslavia in the 1990s.

He has been charged with genocide for allegedly overseeing the massacre of almost 8,000 Muslim men and boys at the town of Srebrenica in 1995. The massacre is considered the worst such crime on European soil since the Second World War.

He is also accused of being behind the siege of the Bosnian capital, Sarajevo, during which an estimated 10,000 people were killed in a relentless campaign of shelling and sniping. Mladic has denied the charges.

Read more: What was the Srebrenica massacre?

Mladic, long a symbol of impunity in the Balkans, was arrested in Serbia in 2011 after more than a decade on the run. He was taken into custody in The Hague to face a trial which spanned more than five years. The 74-year-old faces life imprisonment if found guilty.

"It would be... an insult to the victims, living and dead, and an affront to justice to impose any sentence other than the most severe available one: a life sentence," prosecutor Alan Tieger told the court during closing arguments in December 2016.

Mladic's defense lawyers called for him to be acquitted on all charges, saying prosecutors failed to prove his guilt. Defense lawyer Branko Lukic argued that Mladic "is not a monster, he was a soldier defending against a monster that was the Islamic war machine."

About 100,000 people were killed and 2.2 million left homeless during the Bosnian war.

The Mladic verdict will be the last one to be handed down by the ICTY, which is based at The Hague and is expected to close down on December 31.

The tribunal has convicted and sentenced a total of 83 suspects. Mladic's political counterpart during the war, Radovan Karadzic, 72, was found guilty of similar charges in March 2016 and sentenced to 40 years in prison. Former Serbian President Slobodan Milosevic was found dead in his prison cell in 2006 after suffering a heart attack a few months before the verdict in his trial was due.

The former Bosnian Serb leader Radovan Karadzic is guilty of genocide in the brutal Srebrenica massacre, a UN war crimes tribunal ruled. Karadzic is the highest-ranking official to be convicted of war crimes in Bosnia. (24.03.2016)

Prosecutors have begun their closing arguments in the genocide trial of former Bosnian Serb commander Ratko Mladic. The trial has lasted more than four years, with the verdict not expected for another year. (05.12.2016)

Zdravko Tolimir, the 'eyes and ears' of Bosnian Serb general Ratko Mladic, has died in the Netherlands at the age of 67. He had been given a life sentence for genocide by the UN war crimes court. (09.02.2016)