Zdravko Tolimir, the 'eyes and ears' of Bosnian Serb general Ratko Mladic, has died in the Netherlands at the age of 67. He had been given a life sentence for genocide by the UN war crimes court. 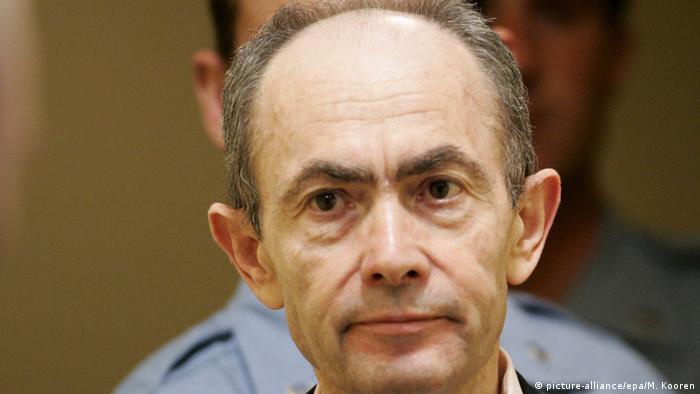 Authorities in The Hague confirmed on Tuesday that a Bosnian Serb general convicted of genocide died in detention. Zdravko Tolimir, once the right-hand man of military leader Ratko Mladic, was handed a life sentence by the International Criminal Tribunal for the former Yugoslavia (ICTY) for his role in the 1995 Srebrenica massacre.

"He died overnight," said an ICTY official who requested anonymity. An official statement from the court said only that local officials "have commenced standard investigations as mandated under Dutch national law."

Speaking to Serbia's Kurir newspaper, Tolimir's widow Nada said she had learned of his death late on Monday.

"He was ill, but the idiots did not allow him to come here and get treatment at home. I was surprised by the news," she told the paper.

During his 2012 trial, Tolimir was described as the "eyes and ears" of Mladic, who is currently before the judge's bench himself in The Hague for crimes against humanity. For both men, the worst charges stem from Srebrenica, where in July 1995 some 8,000 mostly Muslim men and boys were killed.

The slaughter at a site supposedly under UN-protection became known as the worst massacre in Europe since World War II. Tolimir was one of the most senior officers involved to have been found guilty over the murders, and indeed, only a handful of defendants have every been convicted by the UN war crimes court.

However, Tolimir was not the first Bosnian Serb leader to die in ICTY custody. Strongman Slobodan Milosevic died in 2006 while still on trial for genocide and war crimes.

Corruption, no freedom of speech and dubious referendums: Is Republika Srpska getting an easy ride?

Republika Srpska is an autonomous part of Bosnia and Herzegovina. It lives off EU funds without adopting EU values and struggles to come to terms with its brutal past. PM Zeljka Cvijanovic is on Conflict Zone this week. (03.02.2016)

Prosecutors in Bosnia have charged a former Serb member of the country's tripartite presidency of crimes against humanity and war crimes. He is the second former Serb president to be tried. (31.12.2015)

Thousands of people have gathered in Srebrenica to mark the 20th anniversary of the worst mass killing in Europe since World War II. Dignitaries from across the globe were also in attendance at the memorial service. (11.07.2015)